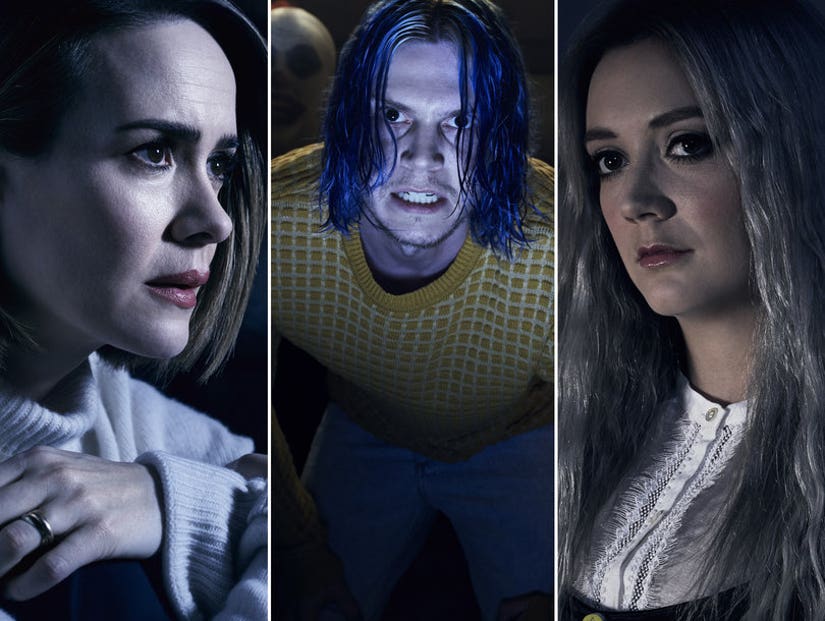 Send in the clowns!

The season premiere of "American Horror Story: Cult" dropped Tuesday night on FX with an hour filled with masked murderers, freaky phobias and, scariest of all for some, Trump's 2016 election win.

The events of the premiere can be summed up as such: After Donald Trump is named 45, Ally Mayfair-Richards (Sarah Paulson) finds herself crippled by extreme anxiety and a resurgence of past phobias as she's seemingly stalked by killer circus rejects. Making matters worse for Ally, her wife and son: Kai (Evan Peters) and Winter Anderson (Billie Lourd), who are targeting the family for some yet-unknown reason and infiltrating their home via Winter's new nanny gig.

The episode ends with the brutal murder of the Mayfair-Richards family's neighbors and a huge shock as Ally wakes up in the night with a clown beside her in bed.

We'll be recapping the show all season long, breaking down the biggest questions viewers at home are left asking after every episode. Here's what we've got after the premiere:

How much of what Ally is seeing is real?

Ally explained to her therapist how her fears of clowns, confined spaces, blood and, yes, holes, have all gotten worse in the election, where she voted for JILL STEIN of all people. While she has freaky run-ins with clowns multiple times through the episode, could some be in her own mind?

While most of this points to Ally simply seeing things that don't exist, there's one big elephant in the room: her son Oz saw the same exact group of masked maniacs when they killed their neighbors. Winter tries to explain it all away by saying the boy's love of Twisty the Clown comics led to his imagination running wild, but she's not exactly trusworthy.

The first image we see of Kai is him celebrating Trump's win all alone in his home, humping the television before covering his face in orange Cheeto dust in one truly terrifying visual. He then visits Winter in her bedroom, boasting about Donald's victory to a woman who proudly voted for Hillary Clinton.

Considering the theme of the season, it sure seems like Kai is a cult leader and the finger thing is some sort of ritual with his followers. But with both of them also sharing the same last name, are they also siblings? And what's with the one room in the house with a rose on the door?

As Kai attends a town hall meeting, his goal becomes clear: he plans to use Trump's victory to spread chaos and rise to power himself. But where do Ally and her family fit into all this?

By preying on Ally's fears and having Winter desensitize Oz to violence by showing him Faces of Death videos, it sure seems like he's trying to recruit them. But to what end? And why is Ivy being spared for now?

Who Are the Clowns?

"American Horror Story" is a show known for its reveals, with the identities of Rubber Man, Bloody Face, The Supreme and The Ten Commandments Killer central to the storylines of their respective seasons.

Will this season revolve around the identities of the men and women hiding beneath the creepy clown masks? Or will they stay faceless followers, only growing in number as the cult grows?

At this point, we could easily see Ally's therapist (Cheyenne Jackson) being one of them, as it's a bit too coincidental how the fears she disclosed to him are the same ones targeting her. But is anyone else in on it already too? We'll see.

Can we talk about that house?

Murder and mayhem aside, there's one thing that's not filling us with dread about the new season of "AHS": Ally and Ivy's home.

While the home's exterior is one familiar to horror movie fans as the house Laurie Strode (Jamie Lee Curtis) babysat at in the first "Halloween" film, we're told the interior is a total set. So major props to the production designer on this one.

What did you think of the premiere? Sound off below!