Donald Trump was in the eye of the storm on late-night Wednesday, as the hosts took aim at how the president referred to Hurricanes Irma and Harvey at his speech in North Dakota and on social media.

On "The Late Show with Stephen Colbert," Stephen Colbert dragged POTUS for comparing the drought they were having in North Dakota to the devastation in Houston. "I know you have a little bit of a drought. They have the opposite, believe me," Trump said during his speech

"I'm gonna guess that one was off-script," Colbert joked, before mimicking Trump's voice. "They had the opposite, I'm forgetting the word for it, they had a big wet down there." 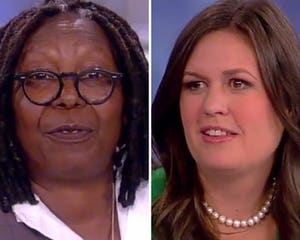 During the same speech, Trump also laid out his tax plan, saying "My administration strongly rejects this offshoring model. And we embrace this new model: the American model." Colbert's response: "I'm not surprised, he's known for embracing American models. He doesn't even ask, just grabs them."

But for the host, the "most awkward moment" of the speech was when he mentioned daughter Ivanka Trump. "She wanted to make the trip. She actually said, 'Daddy, can I go with you?' I like that," Donald said. "Not weird at all," Colbert said, "all of Trump's advisors call him daddy. Sean Spicer was actually the one who started it."

Colbert also railed on Trump for later tweeting, "No rest for the weary!" about those headed to Florida for hurricane relief efforts. "That's a really oddly casual way to describe exhausted first responders racing to save lives," said Colbert.

James Corden also took shots at POTUS on "The Late Late Show," in regards to Trump tweeting, "Hurricane looks like largest ever recorded in the Atlantic!"

"Who uses an exclamation point? How insecure is this guy that he even has to brag that his hurricanes are bigger than Obamas," the host joked. "In Trump's defense, it's rare he sees a national disaster bigger than his administration."

Corden also addressed Trump's comparison between the hurricane in Houston and the drought in North Dakota, saying, "We didn't realize this was a competition. To be clear, both hurricanes and droughts are bad. I can't believe I have to explain that to the President of the United States."

Seth Meyers also joked about the exclamatory tweet on "Late Night," saying, "Hey man, can you try not to sound so excited? It's a hurricane, not the 'Game of Thrones' finale!"