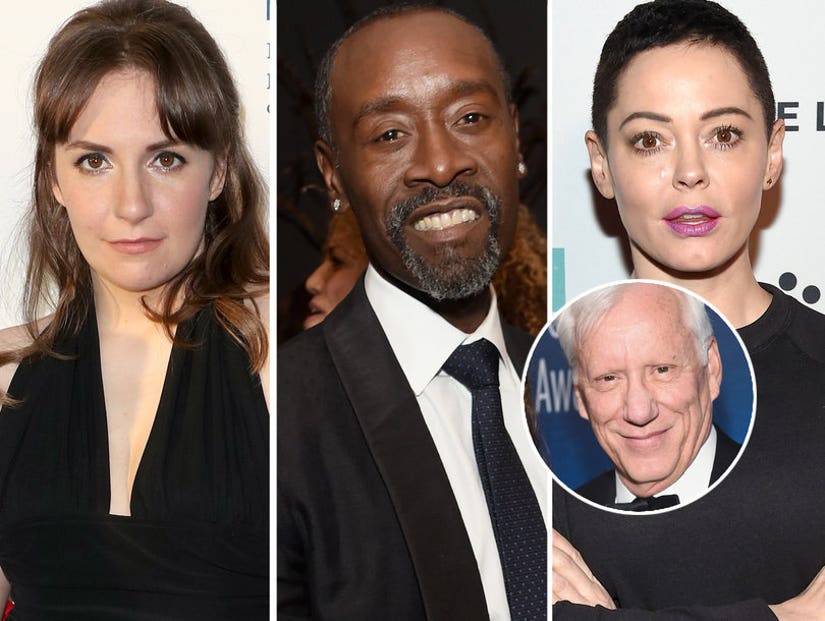 The fallout from James Woods' Twitter war with Armie Hammer and Amber Tamblyn continued Tuesday, as more Hollywood stars torched the actor over his own dating history.

ICYMI: Woods sparked backlash after criticizing the romance between a 17-year-old boy and 24-year-old man in Hammer's "Call Me By My Name," saying the storyline chips away "the last barriers of decency" and adding the hashtag for NAMBLA. Hammer responded by calling out Woods for dating a 19-year-old when he was 59, and Tamblyn chimed in saying the actor invited her to Las Vegas when she was just 16 years old.

Last night, Woods denied Tamblyn's allegations, but the hits kept on coming. To prove she was telling the truth, Tamblyn proceeded to show the receipts by sharing a screen grab of a text conversation she had with a friend:

He wasn't the only star who rallied around the actress, as Don Cheadle, Lena Dunham, Billy Baldwin and Rose McGowan all tweeted their support as well.

Maybe James Woods should google image search himself before accusing @ambertamblyn of fabricating an under age pickup story? pic.twitter.com/pO0aG1EzME

Fuck this dude. I'd lay under a train for the brave queen that is @ambertamblyn (but I would not lay under James Woods) https://t.co/YIddHIJgsn

The scarlett letter is for the almost pedo James Woods. Tell it @ambertamblyn tell it all pic.twitter.com/yFmL3f4m16

Hollywood lore has it that he has an incredibly large d*ck. Reality says he IS an extra-large d*ck. https://t.co/f6Yw3ZIvoA

Little long in the tooth for your liking.. wouldn't ya say Jimmy?#JimmyTheCreep https://t.co/FNafD48URa

Like Trump.. all the viagra, propecia, dementia & anti-psych meds have created a toxic bouillabaisse from which there's no escape for Jimmy? https://t.co/ZRfu3ZngfB

Woods hasn't added anything else about either Hammer or Tamblyn since last night. He spent the morning tweeting criticism of Hillary Clinton's new book and California becoming a sanctuary state.