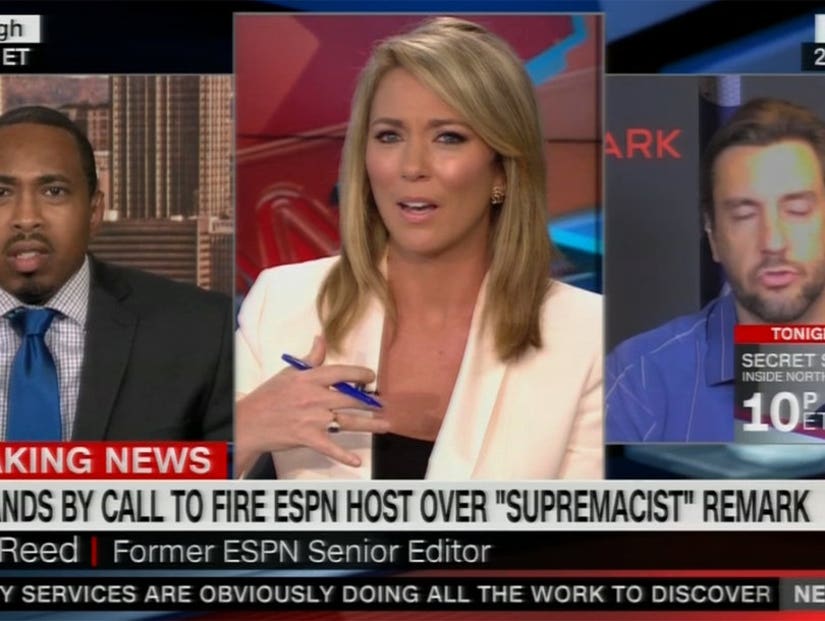 During a discussion between the two and sportswriter Keith Reed about the Jemele Hill situation at ESPN, Travis proudly proclaimed "I believe in the First Amendment and boobs."

Both Baldwin and Reed were visibly shook by his comments.

"Hold on hold on, I just want to make sure I heard you correctly as a woman anchoring this show," Baldwin interrupted, asking him to clarify what he just said.

"Boobs, two things that never let me down, in this entire's country history, the first amendment and boobs," Travis explained. "Those are the two things I believe in absolutely in the country."

When she once again asked him to clarify whether he was saying "boobs" or "booze," he confirmed the former.

"Why would you even say that live on national television with a female host?" Baldwin asked.

"I'm done, I'm sorry. I'm done," she then said. "This conversation is over, yanking mikes, bye. Forgive me, live television happens and you think you heard something, you are not sure and then you realize it happened, so I apologize for him on that."

All three of them then went to their Twitter pages after the exchange:

That was... I just... it was one of those thought bubbles "did he actually say that on MY SHOW?!" Note to men -- that is never okay. #smh

Just went on @cnn and said I only believe in two things completely, the first amendment and boobs and the host lost it. Need video now.

You can't say you like the first amendment and boobs? I say and write it every day. Need to make tshirts now. https://t.co/wRGpzDEKjJ

Need your designs for @outkick's "I love the first amendment and boobs," tshirts. All proceeds to breast cancer awareness for rest of year.