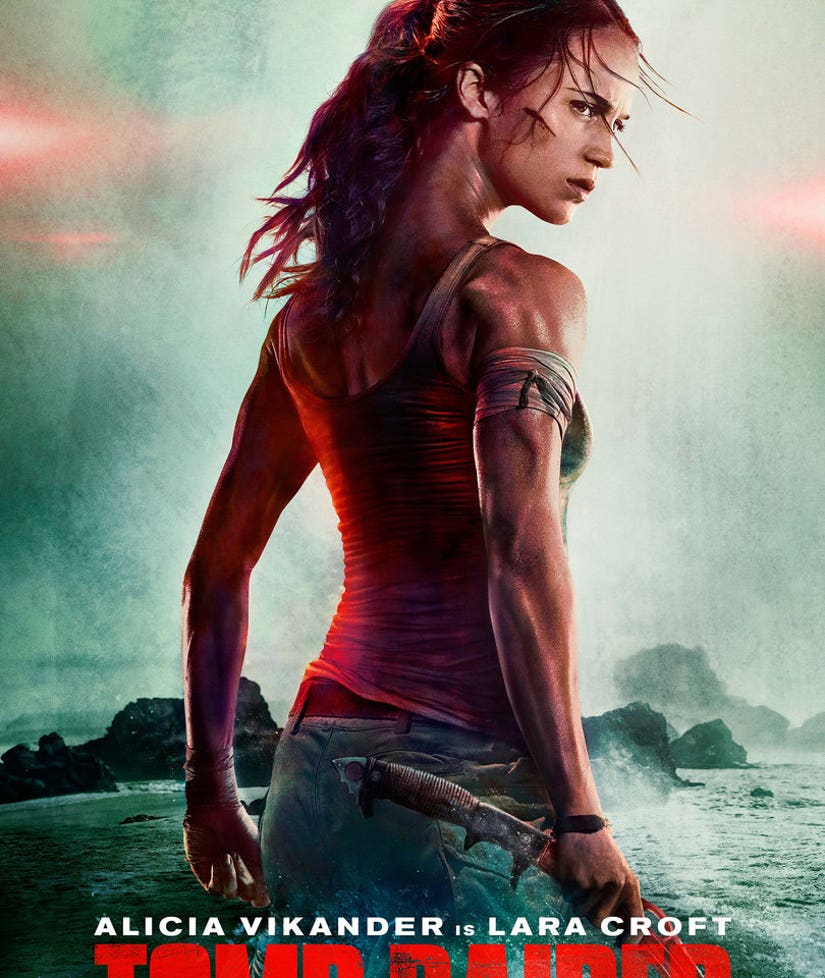 Lara Croft leaps back to the big screen in the first footage from Warner Bros.' "Tomb Raider" reboot, but it's the movie's new poster that's really blowing up Twitter.

Star Alicia Vikander is front and center in the poster (above) and while her impressive arms are the first thing that caught our attention, a ton of critics have taken issue with the actress' twisted, elongated neck.

Also, cool that whoever photoshopped together the tomb raider poster has never seen a human neck in their life pic.twitter.com/vIn2AIJHMZ

i love me some tomb raider but why lara's neck look like ET's about to phone home https://t.co/idYDmO6KKG

The more I look at the Tomb Raider movie poster the less sense that neck makes to me pic.twitter.com/PCq2J5JkMO

I see Alicia Vikander is really putting her neck out for Tomb Raider. pic.twitter.com/dwPukFbfuz

everyone reacting to the neck in the new tomb raider poster pic.twitter.com/LPZjhwCxQo

I expected the "Tomb Raider" first poster chatter to be sexist remarks about her bust. Instead the talk is all about her impossible neck.

The Tomb Raider movie poster has to be the worst movie poster I've possibly ever seen...What is going on with that neck? pic.twitter.com/fG4sE7yVdH

The new Tomb Raider poster looks weird, her neck looks kind of twisted on it.

is the Tomb Raider poster a massive photoshop fail or has Miss Vikander really got that long and flexible a neck?

Tomb raider is the shit, but...

DAAAAAMN GURL WHAT THAT NECK DO THO?!!! https://t.co/VvQYsRRWSi

Saw the new Tomb Raider movie poster and I'm just so relieved that Lara appears to have both a butt + boobs. Possibly a lizard neck too idk

Must suck for the Tomb Raider PR team right now. Everybody's talking about a badly photoshopped neck instead of the film itself! 🙃

Alicia Vikander getting her neck ready for the Tomb Raider poster! 😳 pic.twitter.com/CxX1fh0OhR

if you're having a bad day take a gander at the newly released TOMB RAIDER poster - the guy responsible for this must be NECK deep in shit. pic.twitter.com/3aBjfjlnAR

The new Tomb Raider movie posits the question, what if Lara Croft had a giraffe neck? https://t.co/PsNiV51pLm

To be fair, Lara did suffer several neck injuries when I learned how to do the swan dive in Tomb Raider 2. https://t.co/JYVnNnf9ZG

As for the footage, it's far more convincing. The :15-long sneak peek gives fleeting glimpses of the treasure hunter running through the forrest, firing a bow and arrow and deftly avoiding contact with a boobytrap in a tomb. The full trailer drops tomorrow.

Lara Croft is the fiercely independent daughter of an eccentric adventurer who vanished when she was scarcely a teen. Now a young woman of 21 without any real focus or purpose, Lara navigates the chaotic streets of trendy East London as a bike courier, barely making the rent, and takes college courses, rarely making it to class. Determined to forge her own path, she refuses to take the reins of her father's global empire just as staunchly as she rejects the idea that he's truly gone. Advised to face the facts and move forward after seven years without him, even Lara can't understand what drives her to finally solve the puzzle of his mysterious death.

Going explicitly against his final wishes, she leaves everything she knows behind in search of her dad's last-known destination: a fabled tomb on a mythical island that might be somewhere off the coast of Japan. But her mission will not be an easy one; just reaching the island will be extremely treacherous. Suddenly, the stakes couldn't be higher for Lara, who—against the odds and armed with only her sharp mind, blind faith and inherently stubborn spirit—must learn to push herself beyond her limits as she journeys into the unknown. If she survives this perilous adventure, it could be the making of her, earning her the name tomb raider.