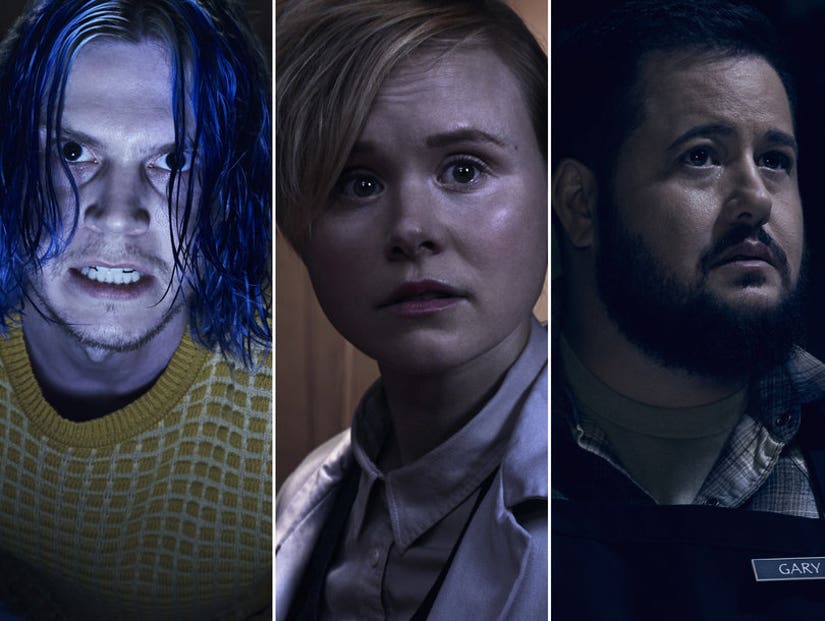 "American Horror Story: Cult" kicked off with a flashback to Election Night, as the Wiltons (Billy Eichner and Leslie Grossman), the Mayfair-Richards (Sarah Paulson and Allison Pill), Winter and Kai Anderson (Bille Lourd and Evan Peters) and Gary (Chaz Bono) all cast their ballots at the same location.

The open ended with Kai rushing Gary into a polling place as Bono's character dripped blood all over the floor. In a scene that would make more sense by the episode's end, Gary held up a bloody stump where his hand should be and shouted, "Welcome to Trump's America, mother fuckers!"

Harrison and Kai Met at the Gym

Use them he does, when he crushed his boss to death under a barbell. Their segment ended with Meadow walking in on Harrison chopping up the body, spreading the word that Kai is "someone to believe in."

The third flashback revolved around Adina Porter's Beverly Hope, a reporter who's fed up with playing second fiddle to the ridiculously named Serena Belinda (Roberts in mean girl mode). You see, Hope just got back to work after some time in a mental institution -- after freaking out on air when one man too many interrupted her live shots by shouting "Grab her by the pussy!" -- and is not happy about the competition.

After catching her trying to slash Serena's tires, Kai gave her the cult pitch as well. It's here we learn how filled with rage Beverly really is, as she said, "It feels like wanting to be the last person on earth, because that way you got to watch every other son of a bitch die before you."

To prove how much he wanted Beverly in his crew, Kai sicked his insane clown posse on Serena, who is brutally murdered while reporting on a pet adoption fair.

With that, Beverly's in and stars spreading fear on the evening news as part of Kai's plan.

Unbeknownst to Ally or viewers, Ivy and Winter actually met weeks before Billie Lourd's character was hired as the family nanny.

The duo first came face to face at a rally, where Chaz Bono's Donald Trump-supporting Gary sexually assaulted Ivy while telling her, "Maybe you could use a little pussy grab you elitist, PC bitch."

The two women then bonded over some food and kidnapping, dragging Gary to a grimy basement and handcuffing him to a pipe until after the election, so he wouldn't be able to vote.

At this point, we don't know if Ivy knows anything else about the cult, but her relationship with Winter certainly seems shady. How much longer until we know for sure if she's in on it all?!

After returning home, Winter told her brother that it "felt fucking fantastic" to cause a little chaos, before apparently giving him Gary's location.

"For 8 years, they've been telling you there's something wrong with you for being a straight, white, working man," Kai said to their captor after going to the basement. "Samantha Bee, Rachel Maddow, all those fucking bitches mock you. I ask you: What is that worth to you? What would you give for the chance to do that?"

The answer: his hand!