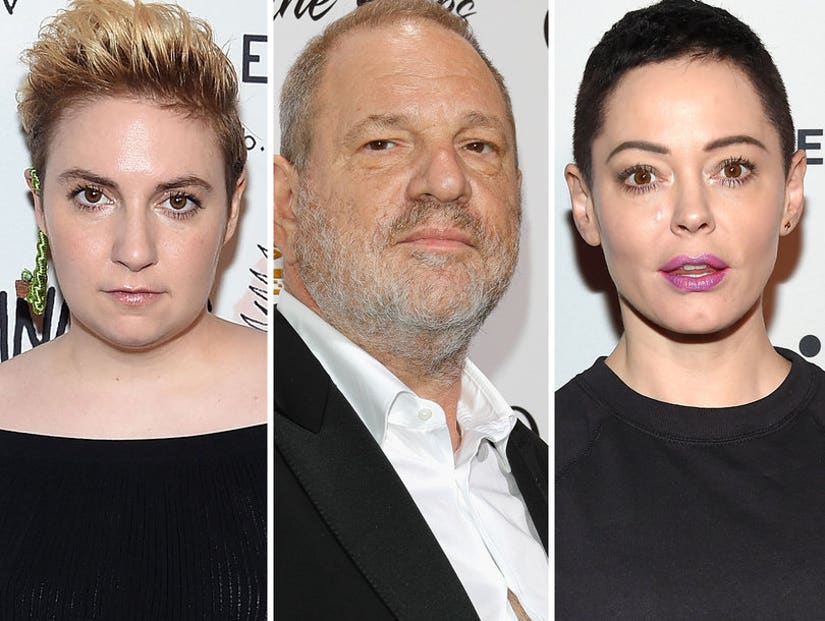 Hollywood is speaking out after an explosive report from the New York Times detailing "decades of sexual harassment" by Hollywood mogul Harvey Weinstein.

The report said Weinstein "reached at least eight settlements with women" and also included a first-hand account from actress Ashley Judd of an inappropriate interaction she had with him in a hotel room in the '90s. In a lengthy statement to the Times, Weinstein admitted to some of his behavior, though attorney/advisor Lisa Bloom said "he denies many of the accusations as patently false."

According to the report, Rose McGowan received a $100,000 settlement from Weinstein in 1997 after an incident in a hotel room. The actress, who starred in Weinstein Company's original "Scream" film, didn't mention Weinstein by name but tweeted the following after the article was published:

Women fight on. And to the men out there, stand up. We need you as allies. #bebrave

Anyone who does business with __ is complicit. And deep down you know you are even dirtier. Cleanse yourselves.

The woman who chose to speak about their experience of harassment by Harvey Weinstein deserve our awe. It's not fun or easy. It's brave.

Thank you @jodikantor for pushing past flimsy but firm veil of secrecy. You are a hero to many.

Yup yup yup yup. Every day. Even from "good guys" who brag about hiring female directors or producing POC narratives. YUP EVEN THEM.

Heed the mantra and never forget: Women. Have. Nothing. To. Gain. And. Everything. To Lose. By. Coming. forward. https://t.co/ynKX1bcBkK

Very brave of @ashleyjudd to tell her story of harassment by Harvey Weinstein to the NYT. No upside except making the world a better place.

Hollywood producer I know: "Shocked it's taken so long for a Harvey Weinstein behavior expose. One of the most open secrets in Hollywood."

I worked for the Weinsteins multiple times. They also sued me once.

This will be their legacy. Not all those Oscars. THIS.

30 years of covering up sexual abuse - not just in the Catholic Church but also in elite liberal Hollywood.

I expect the Hollywood elite will remain largely silent about Weinstein. Me, I give zero fucks about any repercussions for condemning him.

Weinstein's attempt to rally liberals to his side by attacking the NRA is gross and absurd and I hope people don't fall for it.

Now the world can know what many people in entertainment/media have known for years: Harvey Weinstein is a sexual predator. https://t.co/MamSgbef7x

.@LisaBloom - why are you defending this? This is no better than O'Reilly! https://t.co/VELzrEIzNh

When did you meet YOUR Harvey Weinstein? I'll go first: I was a 17-yr-old co-op student and he insisted on massaging my shoulders as I typed

Harvey Weinstein is a piece of garbage.

Unlike the right, I blame the harrasser, not the women being harassed, no matter their politics.

Also, there are guys like Harvey Weinstein in publishing.

Harvey Weinstein's "I'm Trying To Do Better" Guide To Redemption

Step 1. Sue the reporters who caught you being a sexual predator

Stop sexually harassing women. It's not hard. Can't wait for every piece of shit that does this gets exposed for the human garbage they are.

A lot of people, especially as ~wokeness~ gets more publicly rewarded, have learned what language to use to "pass." It's a thin veneer.

I took meetings at Weinstein. With other female execs. But every single time I'd hear “as long as you aren't meeting with Harvey, you'll be fine.” That's our reality.

I don't have any Harvey Weinstein campaign contributions to return so I'm converting our Shakespeare in Love DVD into a dog bowl coaster 🐶 pic.twitter.com/EAmqBE1Yiv

Hey @jimmykimmel, you missed the Harvey Weinstein story bro, because you haven't said anything about it!

Lena is one of the few actresses/entertainment figures to tweet about Harvey Weinstein. Hollywood is full of cowards...just like DC. https://t.co/lr0aAJSTBA

As always, I stand with the brave survivors of sexual assault and harassment. It's not your fault. I believe you.

Modern feminism sometimes suffers from a lack of explicit examples of sexism. Not today:

The rot at the heart of Hollywood. https://t.co/llWFMJZxxd

Dear Hollywood, if you "all knew" about Harvey Weinstein, why didn't you fucking say something? https://t.co/790ZrhZ9tK

This isn't difficult. Normal, compassionate, rational people feel the same disgust for Weinstein as for Ailes and O'Reilly, and vice versa.

Among everything else bizarre about Weinstein's statement, the implication that he could've destroyed the NRA at any time, but just wasn't facing enough sexual harassment charges to really focus, is something. https://t.co/WULvQPnpFC

The Weinstein story, the Milo story, the Penn State hazing story… feel like everything I read today was about toxic masculinity