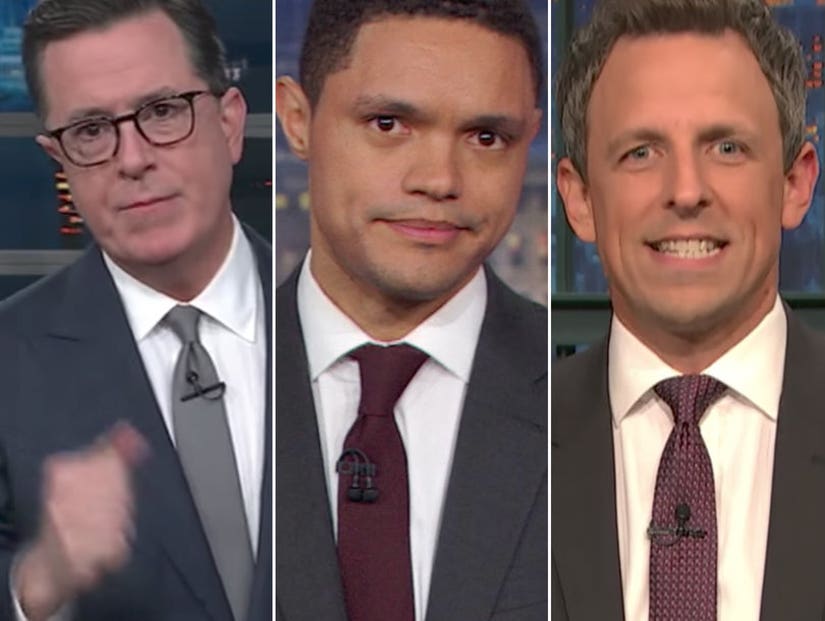 Stephen Colbert told his studio audience and viewers that Thursday night's guest Louis C.K. had to cancel his appearance because The New York Times broke their "disturbing" story about the comedian just a few hours prior.

"For those of you tuning in to see my interview with Louis C.K. tonight, I have some bad news," Colbert said. "Then I have some really bad news. Louis cancelled his appearance here tonight because the New York Times broke this story today: Five women are accusing Louis C.K. of sexual misconduct."

"When reached for comment Jesus said, 'La-la-la-la-la. I don't want to hear about it, I was a big fan,'" he added, reiterating a joke he made earlier in his monologue about Republican Senate candidate Roy Moore, who was accused of initiating a sexual relationship with a 14-year-old girl and other teenagers while in his 30s.

Colbert went on to call the CK story "the latest in an avalanche of allegations against powerful and prominent men," also citing Harvey Weinstein, Kevin Spacey, Roger Ailes and Bill O'Reilly.

"Like, at this point, we're going to need a new Oscar category this year: Best actor whose movies we can't watch anymore," he continued. "All women in Hollywood should win double Oscars for acting like all the men were cool all along, every single one of them. This shit is insane."

Over on NBC, Seth Meyers opened up his late-night show by explaining how happy he is to be working in comedy over politics since the industry has become so "perverted." The host then talked about the underage sexual allegations against Republican Roy Moore.

"Politics are so full of perverts and deviants, I'm so glad I work in comedy," Meyers said, as a screen grab of the Times' C.K. exposé appeared on the screen.