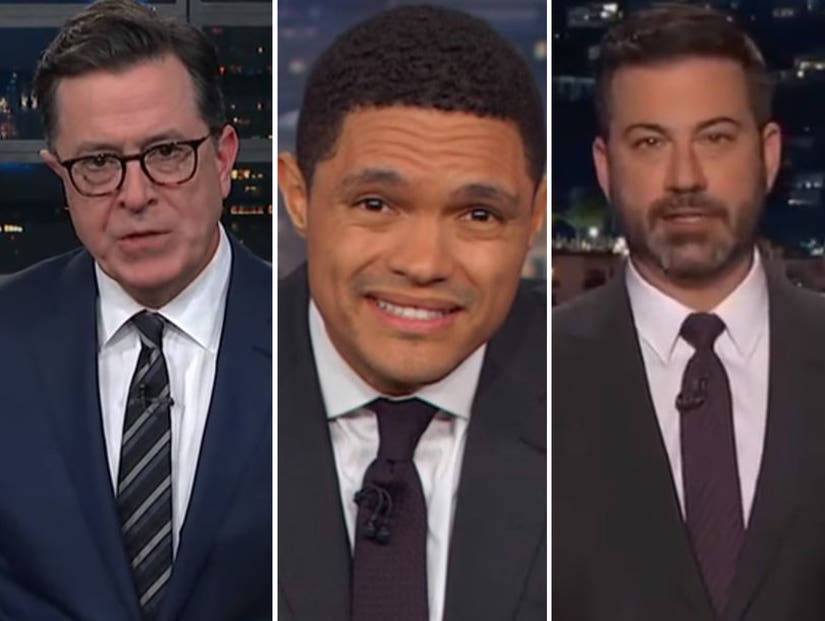 The comedy world turned on one of their own Thursday, as almost every late-night host railed against Minnesota Senator Al Franken after he was accused of sexual harassment and groping earlier in the day.

Newscaster Leeann Tweeden alleged that during a U.S.O tour of the Middle East in 2006, Franken wrote a comedy skit for them involving a kiss and insisted that she rehearse it with him beforehand. When she eventually gave in, she said he "aggressively stuck his tongue in my mouth." Later, while she was sleeping on the flight back, took a picture of himself with his hands over her breasts.

Franken initially responded to these accusations with a terse apology saying he "certainly [doesn't] remember the rehearsal for the skit in the same way" and he "shouldn't have done" the photograph that was "clearly intended to be funny but wasn't."

"The first thing I want to do is apologize: to Leeann, to everyone else who was part of that tour, to everyone who has worked for me, to everyone I represent, and to everyone who counts on me to be an ally and supporter and champion of women," he said in a long statement later in the day. "I respect women. I don't respect men who don't. And the fact that my own actions have given people a good reason to doubt that makes me feel ashamed."

Here's how late-night reacted to the news:

"I guess there are no good people left, so let's just get it over with. Just tell us whatever you did, Jimmy Carter, Barack Obama, Tom Hanks ... Malala," joked the host at the top of his show.

"As a fellow comedian, I long admired Al Franken, but I gotta say, this does not bode well for Louis C.K.'s Senate hopes," he continued.

Of Franken's initial Twitter apology, Colbert added: "Your movie 'Stuart Saves His Family' was intended to be funny, but wasn't. That photo was intended to embarrass her, that's why he did it when she was asleep."

Franken also said he'd cooperate with any ethics committee investigation. "That's nice," said Colbert, "it would be wrong if an ethics investigation was done without his consent."

"Al Franken, #YouToo?" said Noah. "And that face doesn't help, he clearly thinks it's funny, she's not in on the joke, she's asleep. Even if there wasn't a woman in that picture, that pose is its own crime."

"This story is another example that at all levels, we men have been complicit in perpetuating the culture that devalues women," he continued. "I don't care who you are, Democrat, Republican, black, white, rich, poor. Men. You forget, it's not just Al Franken in the picture, it's the guy who's taking the picture. His Billy Bush, who's that guy?"

"Today we also learned yet again — as if more evidence was needed — that this is not a partisan problem," Meyers said of sexual harassment. "There are sexual harassers of all political persuasions in both parties."

Of Franken, specifically, he called his alleged actions "horrifying."

"And she's wearing army gear because it's a U.S.O. tour. But honestly, who could blame women if they started wearing military gear whenever they're around men?" he asked. "Where are you going in a helmet and flack jacket? 'The subway.'"

Of the photo, Kimmel said, "fortunately, she was wearing her grope proof vest."

"At this point, I know it sounds extreme, but I think it might be time for guys ... I think we might just need to all hand our penises over to the police for a few months until we can get a handle on it," he added.

The Tonight Show with Jimmy Fallon

"Some shocking news you guys, it just came out that as many as four elected officials have not been accused of sexual harassment," Fallon joked at the top of his monologue.

"Radio host Leeann Tweeden came forward and said Senator Al Franken groped her without her consent, and she posted a photo as evidence," he went on. "In fact, it's so bad, Franken's already a front-runner for president in 2020."