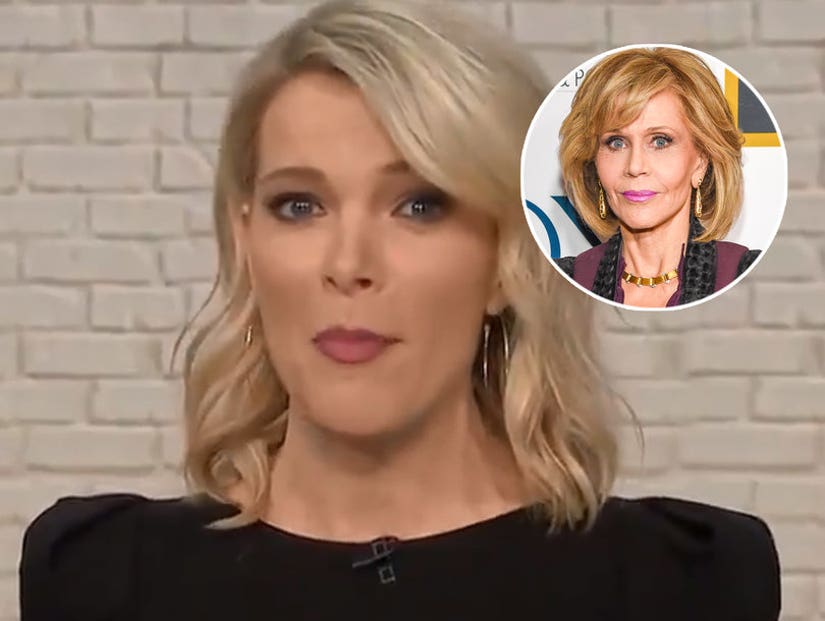 After the two had an awkward exchange about what work the "Grace and Frankie" star has had done over the years back in September, Fonda has since dissed Kelly's line of questioning on "Today" and in a new Variety interview. Kelly, apparently, has had enough. 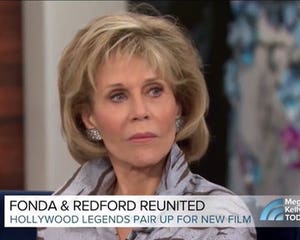 Saying Fonda "appears to be fixated on an exchange I had with her months ago on this show," Kelly went into a 3-minute tirade against the legendary actress earlier today. "When she first complained, publicly, after the program and repeatedly, I chose to say nothing," she continued, "as my general philosophy is what other people think of me is none of my business. However, Fonda was at it again this week. It's time to address the 'poor me' routine."

"For some context, Fonda was on to promote a film about aging. For years, she has spoken openly about her joy in giving a cultural face to older women. The truth is, most older women, look nothing like Fonda, who is now 80," said Kelly. "And if Fonda really wants to have a discussion about older women's cultural face, then her plastic surgery is tough to ignore. Fonda herself knows this and that is why, to her credit, she has discussed her cosmetic surgery pretty much everywhere before coming on our show." 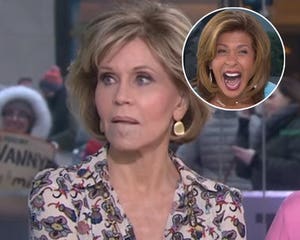 "I was supposed to discern that this subject was off limits. I gave her the chance to empower other women, young and old, on a subject which she purports to know well and she rejected it. It's ok," she added. "I have no regrets about that question. Nor am I in the market for a lesson from Jane Fonda on what is or is not appropriate. After all, this is a woman who's name is synonymous of outrage."

"Look at her treatment of our military during the Vietnam war, many of our veterans still call her 'Hanoi Jane' thanks to her radio broadcasts, which attempted to shame American troops," Kelly went on. "She posed on an anti-aircraft gun used to shoot down our pilots. She called our POW's 'hypocrites and liars' and referred to their torture as understandable. Even she had to apologize years later for that gun picture, but not for the rest of it."

“And now, a word on Jane Fonda …who appears to be fixated on an exchange I had with her *months ago* on this show” #MegynTODAY pic.twitter.com/jmUMlGFaJr

"By the way she still says she's not proud of America. So, the moral indignation is a little much," she said in closing. "She put her plastic surgery out there. She said she wanted to discuss the plight of older women in America. And honestly she has no business lecturing anyone on what qualifies as offensive."

Twitter exploded after her scathing speech, with many accusing Kelly of reverting to "Fox News habits" and being a "Mean Girl" towards Fonda:

If Megyn want to do whataboutism, then we should really talk about she built her television career on ugly race baiting. Black Santa, New Black Panthers, "inner cities" and lots more https://t.co/saNOJABzU2 https://t.co/gg1qhTx4n9

Just rename #MegynKellyToday, Megyn Kelly's Fox Mean Girl Hour. That attack on Jane Fonda was one of the worst and embarrassing things I've seen on a NBC News program.

ICYMI, here's Megyn Kelly's embarrassing segment on Jane Fonda. I have never seen anything so petty coming from anyone at @NBCNews. Lashing out at the slightest hint of public criticism is conduct unbecoming of a news anchor. Hiring her was a huge mistake! pic.twitter.com/Hwzy4D9604

Megyn Kelly on NBC but sounds a lot like Fox...#resist #fbrpic.twitter.com/eKYGrgGWW1

Thought the @TODAYshow was supposed to be light & uplifting. Megyn Kelly has turned it into something dark & sinister. SAD

Jane Fonda is a feminist icon, an artistic genius, an exercise mogul, a national treasure. Megyn Kelly is famous for assuring children on a 10pm cable news broadcast that Santa Claus is white.

WOW! @megynkelly @nbc the low blow attack you dug up on @Janefonda was uncalled for. Very unprofessional and juvenile

@MegynTODAY @megynkelly Get over Jane Fonda!! Who cares! She didn't want to talk to you about it.

Is Megyn Kelly *REALLY* bringing up "Hanoi Jane" on @TODAYshow? My God... pic.twitter.com/NQvTrf0WtC

In a segment on her show, Megyn Kelly just escalated the beef between herself and Jane Fonda. Kelly brought up Fonda's Vietnam War statements and actions. This is crazy and not good?!

Well, that was cringeworthy @megynkelly

Megyn Kelly Today has to be the most cringeworthy hour of television that has ever existed. That shit with Jane Fonda just went next level petty.

This is quite a beef between Megyn Kelly and Jane Fonda regarding plastic surgery. And, Megyn clearly wants to milk it. @MegynTODAY

@megynkelly so, you had to call out @Janefonda this morning because she humiliated you. Tit-for-tat, really? Be careful. Your true colors are showing

Gosh @megynkelly. You are trying to shed the taint of Fox News. Then you fall back on calling her "Hanoi Jane" when @Janefonda criticizes you. Big mistake. Is the @TODAYshow brand really about right-wing culture war tropes now? https://t.co/6j9kYvVGRx

If you had Megyn Kelly in your “brings up Hanoi Jane in 2018 to slam Jane Fonda” office pool, some good news this morning...

WTF @megynkelly please tell me again how you support WOMEN?What you did to @Janefonda, your elder sister was sickening. Btw, I lived through Vietnam era, some of your facts was FOX BS, go back to them!@TODAYshow @NBCNews #overmegyn

@megynkelly Your attack on @Janefonda today was disappointing and below the belt. It was truly mean spirited. I expected better from you.

@TODAYshow @megynkelly Megyn's tired, sexist line of questioning was an insult to @Janefonda and all women. Her vindictive attempt to shame her at the end of the show for speaking out? #classless One less viewer.

Megyn Kelly's attack on Jane Fonda made Megyn Kelly look so, so small. Please NBC, this show is killing us every morning. #MegynKellyToday

The host still had a few people in her corner, however, who applauded her for standing up against the actress:

I think Megyn Kelly was right on about Jane Fonda!!! I still to this day won't watch her films because of the shameful way she acted and continues to act about this country. She still says she isn't proud of this country but she sure doesn't mind taking our money!!!!

It's nice to see @megynkelly
defend herself after Jane Fonda took several shots at her.#DontStartNoneWontBeNonehttps://t.co/hpqj1UNO5d

Megyn Kelly's brutal take down of "Hanoi Jane" Fonda reminded me of the Megyn Kelly that became a star at Fox News. I wish we saw this side of her more often. #MegynKelly #JaneFonda

Good for Megyn Kelly. This might be the first time (at least in a long while) that a daytime audience has heard about Jane Fonda's traitorous behavior. https://t.co/dHO9sFWshI