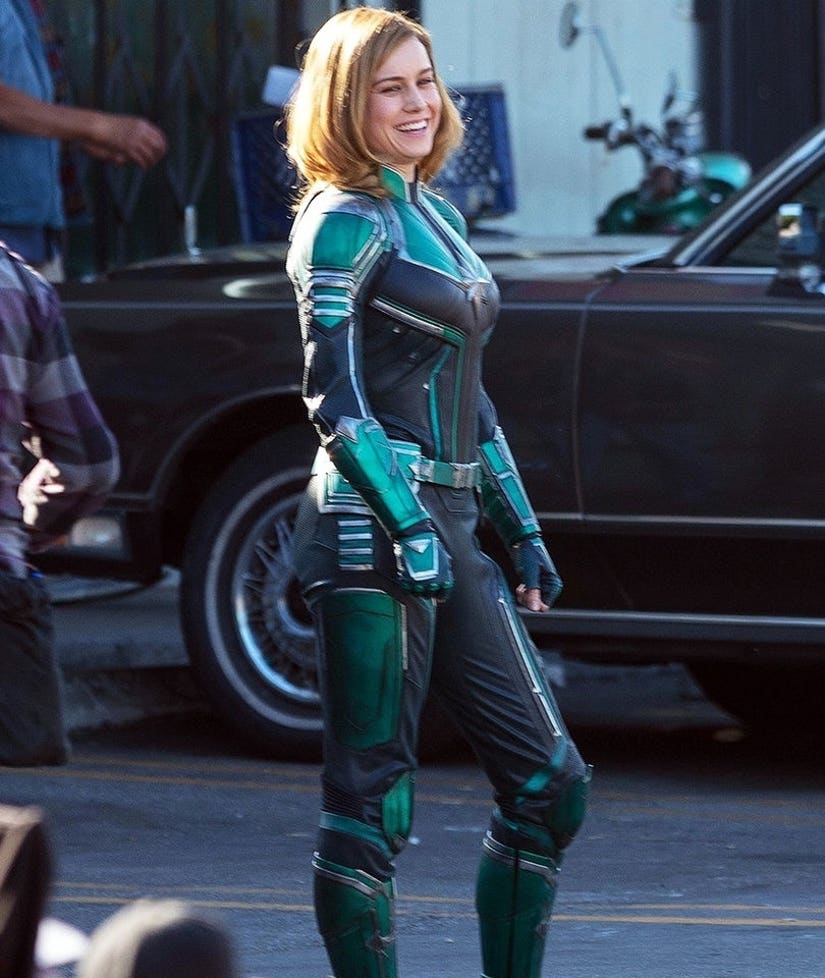 A new Marvel superhero is cause for celebration, but the first glimpse at Captain Marvel in action had a split reaction from the fandom.

Brie Larson was spotted on set in Atlanta wearing her costume for the first time on Thursday, but her ensemble definitely wasn't the look most fans of the comics were expecting. Instead of the red, blue and yellow suit Carol Danvers has made popular in the source material, the black and green getup left many wondering what they were looking at.

At this point, it's unclear whether she was filming for her standalone movie, which will be set in the '90s, or "Avengers 4," which supposedly finished filming earlier this month. Both movies are due out in early 2019, with Captain Marvel's movie dropping first in March. Given Brie's very '90s 'do -- think The Rachel -- many assume it's either a flashback or part of her standalone film.

As for the outfit itself, the green is likely a nod to her character's Kree origins, as well as the original suit worn by Mar-Vell (who will be played by Jude Law in the film). Concept art for the movie shown at both Comic-Con and D23 showed Larson in the now-famous red, blue and yellow outfit -- sash and all -- so fans can likely expect a costume change at some point.

Keep reading to see what fans on Twitter thought about the first look!

There were a few haters:

Not a fan of that Captain Marvel look at all. I'm sure it'll go through some sort of evolution though.

So Brie Larson and #CaptainMarvel are going to be on The CW? 😜

Me wanting to be supportive of the captain marvel movie but also knowing that the suit is god awful pic.twitter.com/PVWGOLiVgi

Brie Larson on the set of the Power Rangers sequel... pic.twitter.com/vxHwHcHHOr

I'm sure I'll get over it because it Marvel and I trust them, but my initial thought is I hate the color scheme. That is not Captain Marvel.

Others were cautiously optimistic:

First look at Brie Larson as #CaptainMarvel! I think this is her very first suit, at some point in the movie she will upgrade to the red and blue one we saw in the concept art. pic.twitter.com/uPlhn8Ej0S

But, mostly, people just excited to see what's to come:

Look, I'm not particularly beholden to any specific version of the CAPTAIN MARVEL costume. All I know is that Brie Larson can do whatever the hell she wants. https://t.co/HBWyAGuEG0

First look at @brielarson in costume as Captain Marvel! I kinda like it but once seen through the films lenses it will look way cooler.

Honestly though Brie Larson is such a good actress she could be wearing a trash bag and make it awesome. pic.twitter.com/GG3Sj3JzMF

Don't forget the first Kree uniform! Then she upgraded it to the iconic red/yellow/blue!!!! MY HEART ITS HAPPENING #CaptainMarvel pic.twitter.com/zJLq78wnd6

Liking the Kree/OG Captain Marvel throwback colorway on this. Gotta assume the current color scheme shows up somewhere later in the film. https://t.co/AuRclZ6IBd

Wait, are people seriously getting triggered over this? #CaptainMarvel #Marvel

Remember how Rogue didn't have her trademark white streak at first, but by the end of the movie she did?
That's what I think is going on here with the color scheme. pic.twitter.com/FjwC5m8t88

Wow I didn't know how excited I was for Brie Larson as Captain Marvel until I saw that picture. Wow, I'm so ready for her film

As a woman who grew up as a teenager smack in the middle of the '90s, I will stan for Brie Larson's #CaptainMarvel wig. That is some on-point hair for that era. Rachel Green infected us all.

#GeekRage is the reason why we can have nice things or see things evolve into them.

Educate yourself! And also, how many different Captain America or Iron Man suits have we seen throughout the MCU? Calm it down now. #CaptainMarvel https://t.co/6R21xIpK5m

Ooooooooh! Captain Marvel is going to rock the Kree colors for a portion of the movie? Color me excited to see it. Gang, this movie is on the right track. Trust me on this, #CaptainMarvel is gonna kick serious ass in 2019. https://t.co/HkHvqgdn8m

Captain Marvel will be the best MCU film.

This is one moment in time. Been a #CaptainMarvel fan for 20 years. To finally see @BrieLarson with that attitude and posture wearing the iconic costume is a feeling that I can't explain. It's just the beginning, Corps!It's all happening and will worth it! STAY TUNED! Colors soon

Brie Larson's first pictures as Captain Marvel are so powerful they scared Casket Affleck off presenting at the oscars, legend https://t.co/LfVTAaHDo5