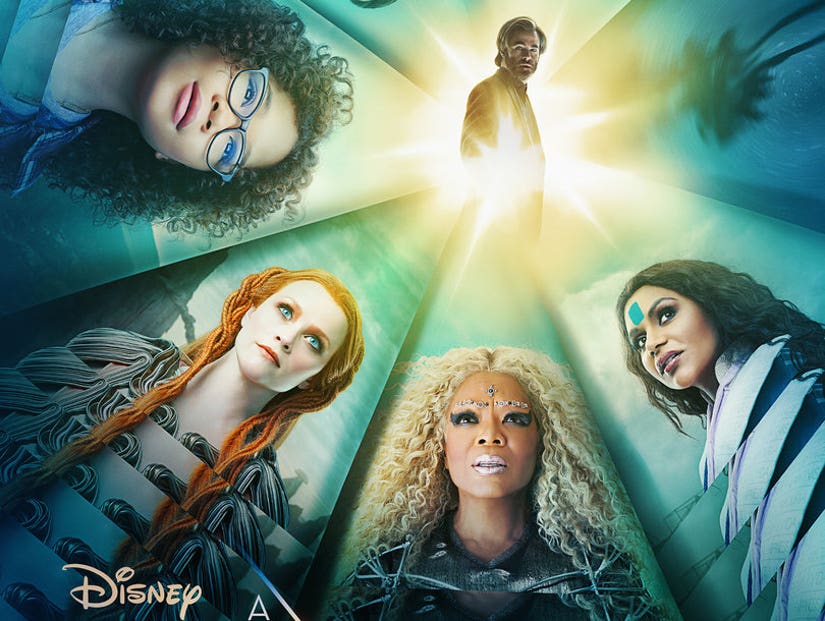 Madeleine L'Engle's required reading, "A Wrinkle In Time," is heading to the big screen thanks to Walt Disney Pictures and director Ava DuVernay and, according to the cast and crew, it couldn't come at a better time.

TooFab caught up with the movie's cast, it's crazy talented director and screenwriter Jennifer Lee on Sunday, where they revealed why now was the perfect time for the beloved book -- which was first published in 1962 -- to get a new adaptation.

Oprah Stresses the Importance of Hope

One of the big themes of the movie is restoring hope in a dark world. During Sunday's press conference, Winfrey was asked whether it's possible to be hopeful in times like these.

DuVernay Says Trust Your Voice (Even If You're Oprah)

"We really held hands on this and became a family, try to give a little bit of sweetness to the world in these dark times," the director explained. "It's a tough time right now. This film really saved me in a lot of ways from going down dark holes."

"We're living in a chaotic time as adults, so imagine if you've only been on the earth for 10 years, 11 years, the tension that you feel," she stressed. "To be able to give a little breather, to say who you are is enough, this is how you're going to make it through, by finding something in yourself that guides you. We all have that little voice inside of us and a lot of times we don't listen to it."

She then mentioned "a friend" of hers who went through "a tremendous episode of peer pressure of gigantic proportions," referring to Winfrey.

"Just a couple weeks ago when the whole country was saying you should run for president," she said, 'The voice inside of me says I am not your president, I can do good in the world in a different way,'" Ava explained. "I probably would have said, everybody thinks I should, I'll give it a try. That's what we need to tap into, your own voice. She's the strongest I ever met."

"To be part of a big big movie like this, it makes me, I feel real proud," said Galifianakis, tearing up. "I can't really talk about it without getting emotional."

"It's nice for a young boy, young man even to see it is OK to have a sensitive side of you," he continued. "Young boys in this climate, they're seen as sensitive and they're made fun of. That means you're stronger to me. I wish we could change that. I came from a very masculine upbringing, I love the way I was raised, but looking back, we need balance. It's time for balance. I think that's the happy medium."

Levi Miller also said "toxic masculinity" is "rampant in society" right now, and believes this film tells "a very special story" to battle that. He added that he grew up with two older sisters, so he was "always" looking up to women.

"We forget that a lot of dumb kids become dumb adults," the actor said.

"Just look at what's happening in the world. There's a big verb that we want to 'harden' schools. What an interesting word, 'harden,'" he continued. "You want to make the most beautiful supple creatures, children, you want to harden that? What are you talking about?"

"The beautiful thing about this piece, is [his character] has been so rigid, structure, that he's so hard, he forgets the most beautiful thing on the planet: this beautiful, supple flower of a gorgeous daughter. He forgets that's the prize. There's no other property or money, none of that stuff matters. It's this. That's like the man finding his inner child, everything that's beautiful about being a human."

Kaling said she loved science fiction and fantasy films growing up, but saw it as a genre "that never loved me back."

"I never saw representation of a dark skinned Indian woman, Indian girl," she said, calling her love for these films so "pure" because she wasn't getting anything in return.

"To be part of this movie and on green screen stage in harnesses because you're doing a science fiction and fantasy movie, it's so fun because I finally feel welcomed with open arms in something that has ignored me completely," she added. "That is so profound and I think that can be something that the miniature version of me could watch and be excited by, I think that's such a huge thing."

"A Wrinkle In Time" hits theaters on March 9.