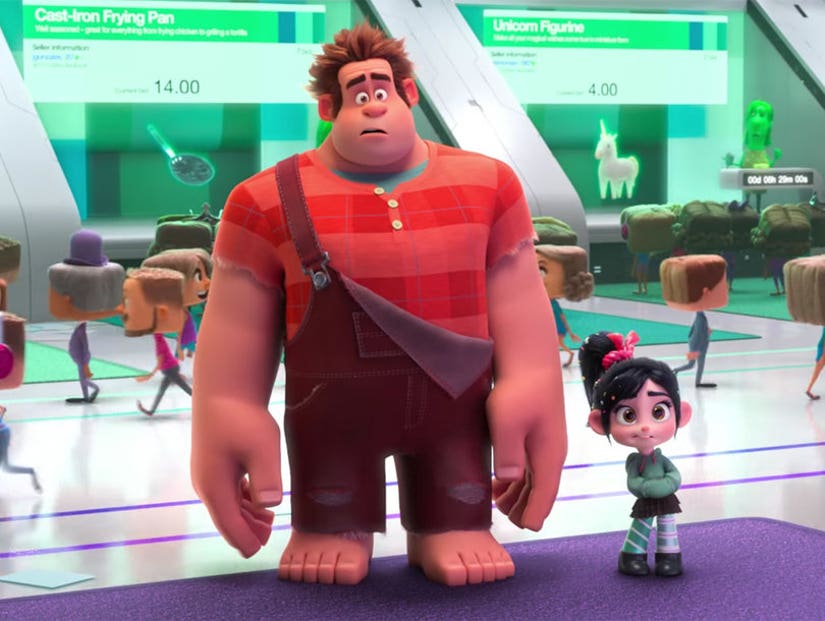 Six years after the first film became a box office success, Wreck-It Ralph is back -- and this time, he's got WiFi.

The sneak peek shows them leaving the safety of Litwak's arcade for the first time, entering the Internet, where they battle pop up ads and clickbait, get enticed by eBay auctions and become addicted to apps just like the rest of us in the real world.

The footage was different from what was shown back at Disney's D23 fan expo back in 2017, where the audience also got a glimpse at a scene where Vanellope visits the OhMyDisney.com website and mingles with almost every single Disney princess that's ever been on film.

The women who voiced all the princesses in their respective films -- including "The Little Mermaid," "Princess and the Frog," "Beauty and the Beast" and "Moana" -- all returned to do voice work for the movie.

The movie's official synopsis from Disney is below. The film hits theaters November 21, 2018.

"Ralph Breaks the Internet: Wreck-It Ralph 2" leaves Litwak's video arcade behind, venturing into the uncharted, expansive and thrilling world of the internet—which may or may not survive Ralph's wrecking. Video game bad guy Ralph (voice of John C. Reilly) and fellow misfit Vanellope von Schweetz (voice of Sarah Silverman) must risk it all by traveling to the world wide web in search of a replacement part to save Vanellope's video game, Sugar Rush. In way over their heads, Ralph and Vanellope rely on the citizens of the internet—the netizens—to help navigate their way, including a webite entrepreneur named Yesss (voice of Taraji P. Henson), who is the head algorithm and the heart and soul of trend-making site "BuzzzTube." Directed by Rich Moore ("Zootopia," "Wreck-It Ralph") and Phil Johnston (co-writer "Wreck-It Ralph," "Cedar Rapids," co-writer "Zootopia,"), and produced by Clark Spencer ("Zootopia," "Wreck-It Ralph," "Bolt"), "Ralph Breaks the Internet: Wreck-Ralph 2" hits theaters on Nov. 21, 2018.