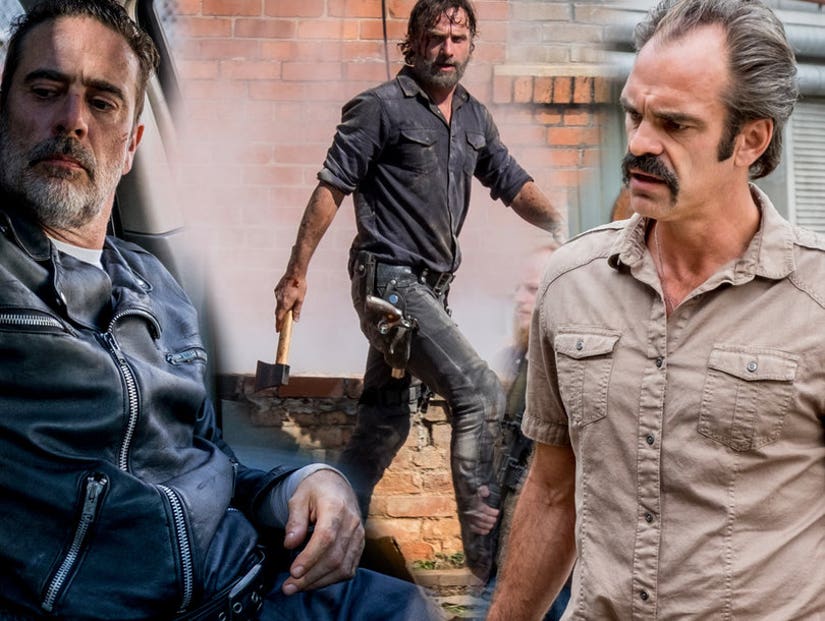 There was a major power shift in Sunday's "The Walking Dead," which ended with Negan completely out of control in almost every way.

If anything, this might be the most hopeful episode of the show this season, as survivors began taking Carl's wishes to heart and Negan started losing his grip on the Saviors. Throw in a promising development in the Hilltop thanks to a new trade, and things are starting to look up for our favorite post-apocalyptic warriors. Well, as much as they can on this show at least.

Let's break down the biggest developments from "The Key." 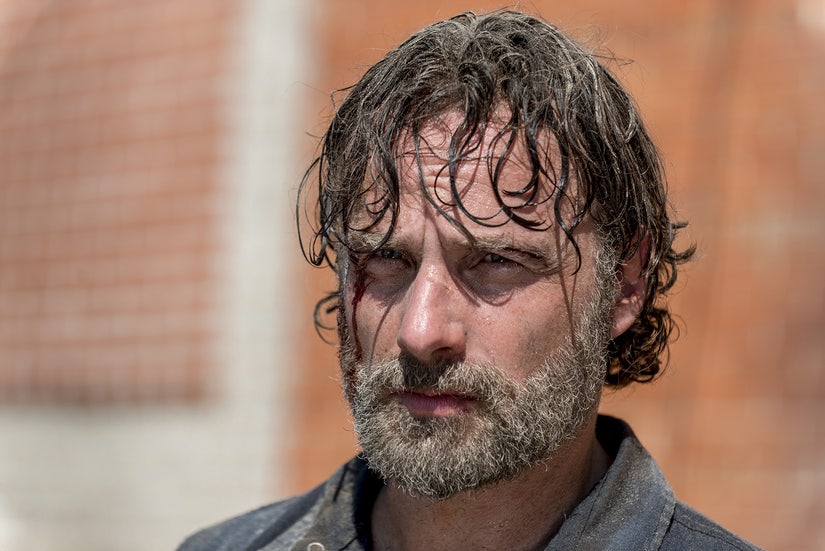 Rick, Jadis and Simon were all out to get Negan, who was dead set on delivering another message to the Hilltop with his whole infected weapons plan. While Simon worked on blindsiding his leader (more on that in a minute), Rick literally took him on headfirst.

First, Rick slammed into Negan's car on his way to the Hilltop. Then, he emptied both an entire assault rifle and handgun while firing at him, missing completely, before chasing the guy into a walker-filled warehouse. Though Rick seemed to have the upper hand, Negan didn't stop his trash talking. "You not only failed your boy, you failed your people, Rick," he told him, before saying he'd give him one more chance. Rick didn't go for it though, asking why he should trust him after what happened to Jadis' community. Negan, of course, had no idea what actually happened there since Simon never told him he actually killed all the trash people. Whoops!

Then, things got epic. At some point during the warehouse chase, Negan lost good ol' Lucille, which Rick stumbled upon. "The only thing you care about is this bat. You can't even save that," he shouted. "I'll make you a deal, I'll let you kiss her goodbye." He then LIT LUCILLE ON FIRE, before the two battled with the flame-engulfed bat lighting the scene.

Rick escaped the building, but it was unclear what happened to Negan until the very end of the episode. In its final moments, he woke up in someone's car, only to find Jadis behind the wheel. After letting out a, "Well, shit," she knocked him out cold. The big question here is what the hell is she going to do to him? Jadis believes he's responsible for her people getting killed, when really he only wanted one or two of them executed (and, yes, that still makes him horrible). His own people also think he's dead, so it's not like they'll be looking for him anytime soon, either.

Think he'll be able to talk his way out of this one? 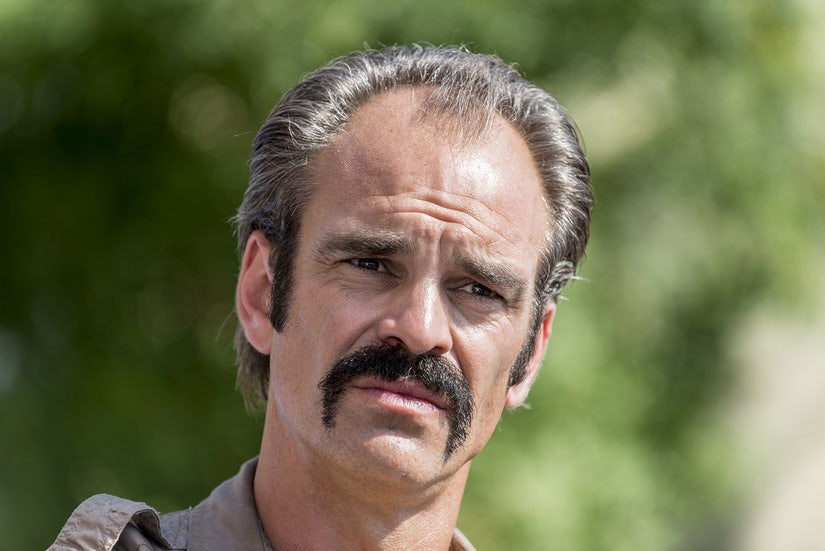 Negan's big plan for the Hilltop was to make them "feel the tip of what we're packing" before making them "drop to their knees, lickety-split" and get back in line. Simon, however, wasn't on the same page. Though Simon started the episode by following the leather-clad villain's commands -- telling the Saviors to just make a few "flesh wounds" with their infected weapons -- those orders went out the window by hour's end.

Riding with Dwight to the Hilltop, Simon clearly saw Rick's car coming for Negan and did nothing about it. Then, instead of helping the bossman, he insisted it's "nothing Negan can't handle on his own." When the rest of the Saviors pushed back, he made it so only himself and Dwight would go, again setting himself up for a big move.

In Simon's eyes, Team Rick just doesn't "scare" and their warning tactics aren't working. While making a plea to Dwight to abandon Negan completely, Simon said they could forge ahead without him, make new arrangements and just "move on." It doesn't sound like too terrible an idea, until he let the other shoe drop while talking to the rest of the Saviors.

"It don't matter if the big man ain't here, we're still Negan," he said. "Our plan, Negan's plan, was to go on to Hilltop and put the fear of God into these people. After what just happened, what they did to Negan, that tells me that what we need from them is beyond them ... There's only one thing left for us to do. We must expunge them. We must redact them. They are a mistake that we shall now erase. We are moving on."

The Key to the Future 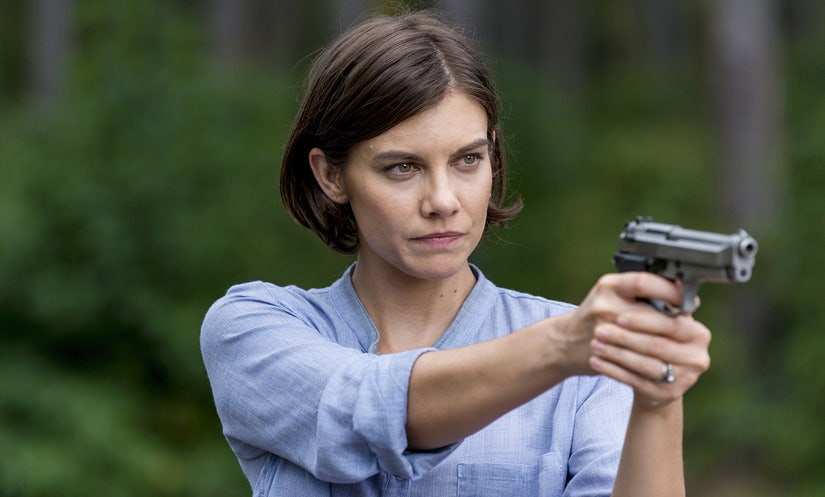 Meanwhile at the Hilltop, Maggie, Michonne, Enid and Rosita were making some big decisions of their own.

While on lookout duty, Maggie spotted a milk crate in the field outside their community. In it, there was a note reading, "If you fill the crates with food or phonograph records, I will gladly exchange them for a key to your future," along with coordinates for where to meet.

After some debate over whether or not to check it out -- Maggie was skeptical, Michonne was curious -- they decided to do it and met an older woman named Georgie and her two sidekicks, Hilda and Midge. Georgie's proposition: give them some food or records -- music, not spoken word -- and she'd supply them with "knowledge."

Georgie called it an "exercise in trust," one that Enid and Maggie failed at initially by wanting to steal all their food and call it a day. Michonne's counter-argument: "Carl rescued Siddiq and now we have a doctor and a friend. Carl was brave. He didn't give up on who Rick wanted him to be and we can't on who he wanted us to be. We can't."

Yep, she pulled the Carl card. That convinced Enid and Maggie, who then gave up a crate full of albums. In return, Georgie not only gifted them with a handbook filled with plans to build silos, wind mills, aqueducts, and basically everything they'd need to turn Hilltop into a truly thriving community, she actually gave them some food from her stores as they were in more dire need than her.

"This isn't a gift, it's a barter, I'll be back," Georgie non-threateningly promised. "When I do, I expect great things." While there is no character named Georgie in the comics, many believe she could end up being Pamela Milton, the leader of the Commonwealth. Making its debut in issue #173, the community is massive, with over 50,000 people, though its motives are still unclear. While Georgie is styled similarly to Pamela, the character doesn't appear for quite some time in the source material -- leaving fans wondering if the show will skip right over The Whisperers, the next group Team Rick finds themselves up against.

OK, now back to Sunday's episode. This storyline ended with Enid asking whether Carl would have wanted them to simply stop fighting. "I don't think Carl wanted us to stop fighting for our future, but I think he was telling us to get to our future it'll take more than fighting," Michonne replied. "There's gotta be something after," she added, quoting Rick's dearly departed son.

Though he's gone, Carl's clearly not forgotten. Now that Michonne's adopted his way of thinking, will she be able to convince Rick -- who's clearly still out for blood -- to do the same?