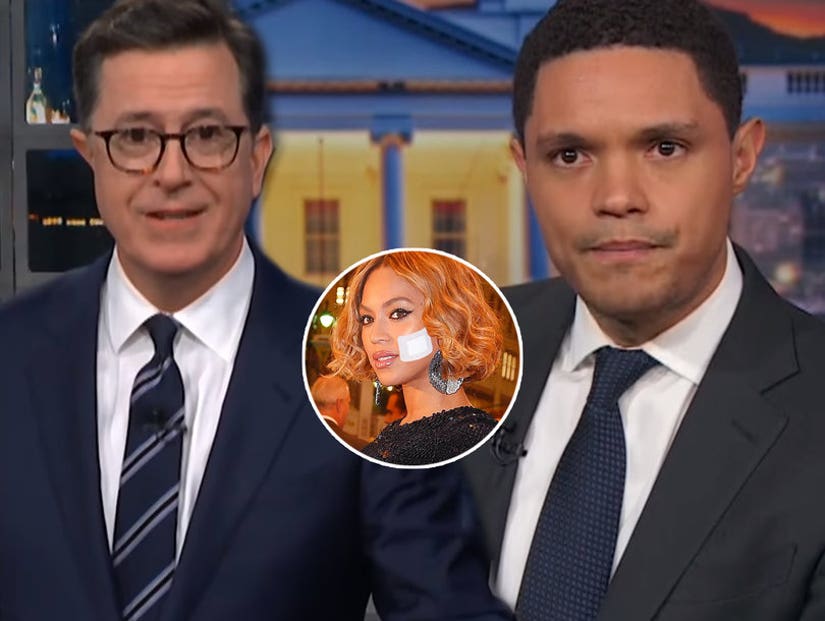 The investigation into who bit Beyonce immediately took over the internet after Tiffany Haddish dropped the bombshell story, and now late-night hosts are getting in on the fun.

Stephen Colbert and Trevor Noah contributed their own ideas Wednesday night after Haddish added another suspect into the mix: Stormy Daniels. 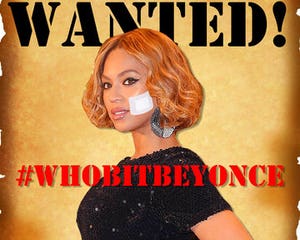 "You wanna know who bit Beyoncé? I'm gonna just tell you all. And it's the last time I'm talking about it, I ain't going to say nothing else about it. Let me sip some of my tea,” Haddish said in an Instagram Live video on Tuesday. "I'm going to tell you who did it then I'm never talking about it again because really it's done. People should be focusing on the real issues at hand."

Haddish inadvertently set off a pop culture obsession on Monday when she told GQ that she saw an actress bite Beyonce at a party in December, prompting a nationwide effort to identify the perpetrator. 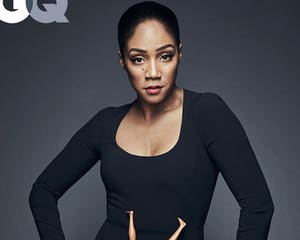 There have been a number of female stars suspected of biting the Grammy winner -- Sanaa Lathan (who TMZ reported is indeed the biter), Chrissy Teigen and Lena Dunham, to name a few -- but Noah had his own suspect in mind, while Colbert raised another important question.

The CBS star weighed in on the debate, first by emphasizing the importance of the investigation.

"The president almost definitely colluded with Russia, but there's equally important news out there: Tiffany Haddish said someone bit Beyonce," Colbert began. "This is the 'Who Shot JR?' for a generation that is too young to understand that reference."

The late-night host then went on to list celebrities that are definitely not suspects, or at least have denied their involvement. "So far all sorts of celebrities have denied being the biter including, Lena Dunham, Jennifer Aniston, Sanaa Lathan, Frances McDormand, even Shirley MacLaine who's spokesperson said, 'No, Shirley did not bite anything. She's 83 years old, for God's sake,'" Colbert said.

What Colbert deemed most important is not only unveiling who would have the audacity to bite Queen B, but that we need to know what Beyonce tastes like. "Fact is Beyonce's biter remains at large," Colbert explained. "And it's extremely important to me that we figure this out, because America needs to know: What does Beyonce taste like?"

The Comedy Central star took the investigation to the next level and utilized a commercial break to delve in to the debate. The late-night host might not know exactly who committed the crime, but he's confident on who is innocent.

"I'm trying to figure it out in my head, I'm trying to like go through it all like I don't think that it would be a black celebrity. As his audience laughed in response, Noah continued, "I'll tell you why. I just don't think any black person thinks that they would be like comfortable enough to like bite Beyonce. If you ever see black people with Beyonce, everyone is just like ... the Queen. We're here we're here we're just like stand around, there's like a forcefield."

Although Noah joked that a black celebrity couldn't be the culprit, he did bring up a possible tall blonde suspect. "I've heard rumors of like Jennifer Lawrence, which I could see, she seems like she would pull something like that, she'd just be like, 'Oh my God, you're so tasty grrr.' I can see it."

Noah opened up the forum to his studio audience, in which a member suggested model Chrissy Teigen. The host jokingly shot her down. "No, she said she didn't do it, she said John Legend told her she didn't do it ... he probably would have made her turn herself in."

Another audience member jokingly accused Mike Tyson, which then prompted Noah to give a spot-on impression of the former boxer, which brought the studio into a fit of laughter.