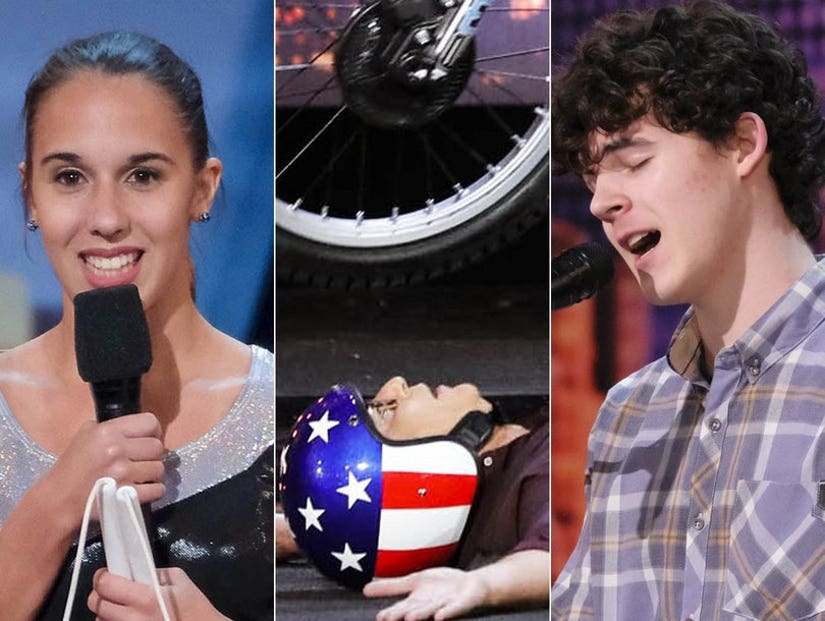 "Remember you're the fifth judge. Be as badly behaved as you want," Simon told the audience on "America's Got Talent" Tuesday night, but come on! We know who he was really talking to. I see you, Simon!

But then Heidi Klum took his words to heart, too, relentlessly teasing and embarrassing a 20-year-old singer who had to admit in front of the entire audience -- and America for that matter -- that not only had he never been on a date, he'd never even "snogged" a girl. And then the poor guy had to go and audition. He was almost as scared as Howie Mandel, who nearly lost his "jewels" while lying catatonic and slack-jawed for a stunt motorcyclist. 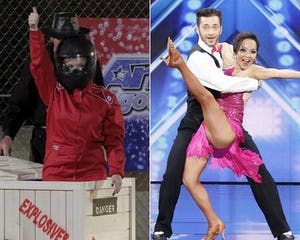 It was a night of wild and crazy auditions, but no golden buzzer. That's not to say there wasn't inspiration galore, and even a couple of acts that might have been worthy of that. There was the violinist who can't feel his fingers, the contortionist who can prowl around like a panther and the second coming of Whitney Houston. As always, you never know what you'll get on this show, and it's always entertaining ... even when it's bad.

'Who do I think I am?' you ask. Well, I spent nearly a decade of my life sweating and bleeding to the music as a dancer. From a young boy learning a shuffle-ball-change to performing with the St. Louis Ballet Company, I experienced the ups and downs of one of the most difficult physically demanding sports on the planet. 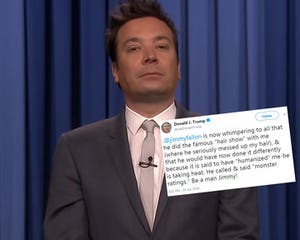 (comedian) I'm not sure if the edit cut him short or if he came out with one subpar joke, but this was bad. Brian left his business two decades ago and has been doing stand-up ever since, and this was his best opener in all that time? That his perfect online match would be a pterodactyl? That's rough, man.

(singer) A doctor by trade, his passion for music worked its way into his trade through writing songs for his patients. It's sweet that he sings for his patients, but this was not a good audition. The writing was pedestrian, the singing was worse and the whole thing was kind of a disappointment. I was hoping he was hiding some secret gift, but he needs to stick to medicine and convince his mother to stop pleading his case. "Wait a minute, wait a minute," she pleaded. But time was up.

(contortionist) Troy was set up as the most ordinary bloke the world has ever seen, clocking in regular hours in HR, eating the same sandwich every day for lunch, following the same routine. It was an interesting setup for a ridiculous contortionist act. He literally looked like a big cat the way he was able to run across the stage, up and down stairs, while twisted over on his back. It's not just his flexibilty that was impressive, it was his mobility while contorted that I'd never seen before. How do you turn that into a million dollar act? I'm game to give him a chance to show me.

(comedian) Andy walked in with a great attitude and was absolutely charming. There was an innocence to his jokes, even as they were pretty blue. It was more like the old-school comedians who could get pretty dirty, but somehow manage to do it in a classy way. Honestly, I'd have liked to see a little more from him to get a good gauge of his talent, as I thought his jokes were good, but none of them really stood out as great. Still, he gets a pass from me for the potential, and because he did make me want to see more of what he's got. 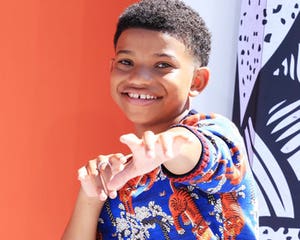 (singer/pianist) Heidi Klum put him on the spot right away by asking if he'd ever been "snogged" right before performing, but Joseph has never kissed or even had a girlfriend before. Apparently, we were shown that cringey moment to add meaning to his lonely and gut-wrenching performance of Lionel Richie's "Hello." It was heartfelt and so passionate, but also underplayed to really let the emotion of the lyrics come through. He even rearranged the verse into a more contemporary sound. It was just beautifully done from top to bottom. I'm not sure he'd have enough of a unique quality to survive a singing show, but he could have a nice run here.

(comedian) After three X's and a slow start, this accordion-playing comedian started to find his groove, and even managed to turn the audience to his side. By the end of his set filled with one-liners and bad puns, he even had most of the judges chuckling along. It's just that he's so abrupt and weird, it takes a second to get into the unique rhythm of his comedy. Howie, at least, knew well enough to give it and French a moment to find himself. And to his benefit, he proved himself funny off the cuff as well, responding to how his set was going as it happened. Like a musical Steven Wright or Mitch Hedberg, French has definitely got something.

(singer) Proving that you never know what talents are hiding inside someone, Glennis had absolutely no difficulty bringing Whitney Houston to life on "Run to You." She has the pipes and the range and even that angelic innocence on the softer notes. The biggest criticism I could give her is that this performance was almost too much like Whitney's take on the song. But being able to pull of Whitney is a feat in itself. She just needs to take the time to find herself musically, because that instrument is breathtakingly gorgeous.

(stunt motorcyclist) Howie Mandel should really get hazard pay for some of the things he does to help these contestants out. He looked frozen in terror for Kenny as he jumped all around him on a dirtbike, including right up between his legs and dangerously close to his "jewels," as Heidi Klum called them. It was harrowing, dangerous and a lot of fun to watch, but why is it always Howie? The poor guy has got to learn to say no once in a while. At least no one touched him in this act. Of course, if that had happened, he might not have survived it. It was very cool to watch Kenny display such control over his machine and pull off some impressively precise tricks. There's definite potential here. 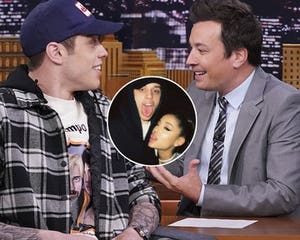 (illusionist) I loved the fun of selecting assistants from the audience by throwing frisbees into the crowd. He then added Heidi Klum and Tyra Banks. He then started a live feed with his cell phone and stepped outside of the theater to perform his act. He then surrounded a platform with witnesses so they could watch as he magically appeared on the stage again. It was a very clever and powerful performance, and even better, it leaves him wide open with possiblities to wow us again.

(singer) Born female, Brody realized he wasn't just a tomboy, he was a boy. Bullied relentlessly, he began transitioning in 2010 and has since found himself. Music helped him through every step of that journey, and it was easy to see why as he has a beautiful voice. What's even more remarkable is that transition inevitably changed his voice from female to male, and he again found a beautiful tone in his new voice and his new body and life. There's a natural ease to his performance, and even without his story he's a talent worth noting. Singers do well on this show, and Brody could well be one of those who goes pretty far.

(jump rope) And just like that, jump rope is so much more than I ever imagined it could be. Vivienne did things I've never seen before, stunts that were intricate, artistic and with unbelievably high difficulty standards. On top of that, she had a musicality to her performance, as well as a joyfuly playfulness that leaves you both breathless and smiling. I'm sure there's a whole sub-sect of jump rope enthusiasts who are familiar with this level of performance, but Vivien brought it to a major platform and just blew everyone away.

(violinist) Suffering from neuropathy, Brian can no longer feel the strings under his fingers, but rather plays from memory. As a cellist, I can say this is absolutely astounding and the discipline it must take him to stay in tune is remarkable. The power of muscle memory, baby! He made violin hip and current and cool in a way that maybe only LIndsey stirling has before him. He also has a very dynamic stage presence, which isn't always easy to do while playing a violin alone on stage. I don't know how much longer he'll have to play either, but I wouldn't want to be the one to stop him. 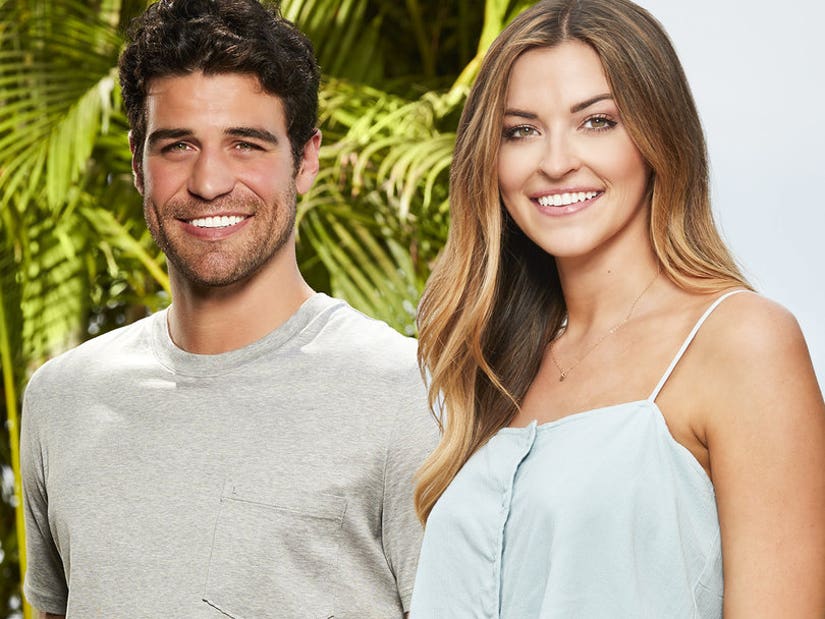