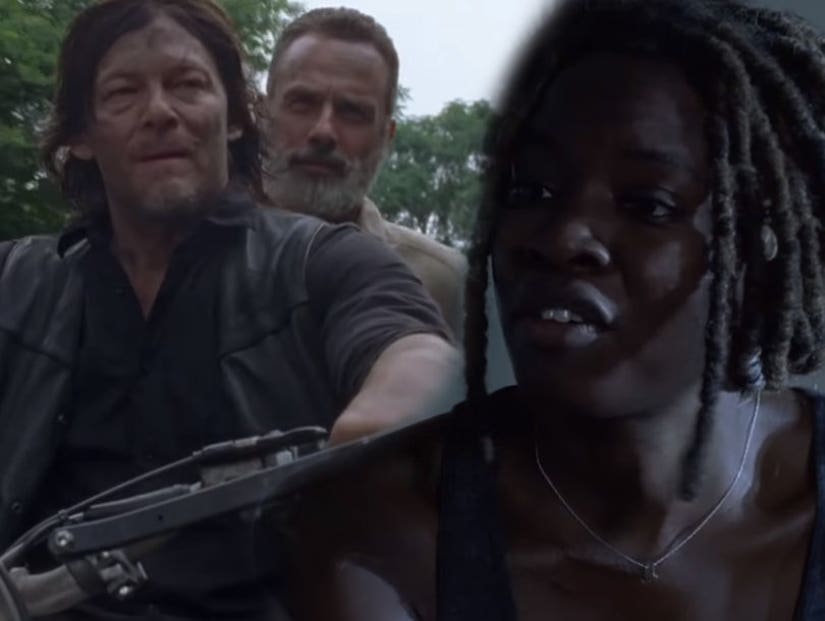 After breaking everyone's heart in Hall H by confirming that Andrew Lincoln is leaving “The Walking Dead” during Season 9, the cast spilled some more about his exit and what's to come when the show returns in a press conference Friday afternoon. 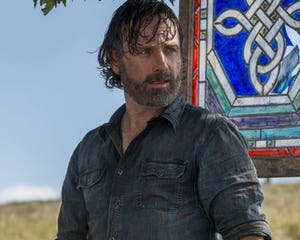 Here's everything we learned from the group!

What Andrew Could Tease About His Goodbye

“I think Lennie James is a perfect example of leaving without dying and doing rather well on it,” he said, referring to the character of Morgan, who jumped to “Fear the Walking Dead.”

“I saw him 5 minutes ago and he looks terrific,” he added. “Yes, there is that way. And then there is obviously the other way, which we've done quite a lot. I'd prefer the Lennie James of it all, but I think what we have in store this season is truly remarkable and I'm really proud of the work that we've done.”

Lincoln also added that he did get choked up during the Hall H panel and said he loves this season.

What About the Whisperers?

Unfortunately, Lincoln couldn't say whether his character sticks around to come face to face with the next group of Big Bads: The Whisperers.

Nicotero, however, talked about bringing that group of villains to the screen. “For me, personally, it's one of the most exciting times that's been on the show in a long time,” he said. “We have this new threat that was really well l introduced in the comic book, knowing we get that little bit of a tease, I love that that's where the show's headed.”

While Samantha Morton has been cast as the gang's leader, Alpha, a reporter asked about her right hand man, Beta. "We talked a little about the trailer today and knowing Alpha has been cast, probably safe to say Beta will be close behind," said Nicotero. "But we're concentrating on the new group of people form the trailer."

He then joked, "I think Andy Lincoln is going to play Beta." Maybe he's not leaving after all!

What Was In Carl's Letter to Michonne?

While we know what was in Carl's letter to his father, we only saw Michonne react to the one he left for her. And no, it wasn't blank. In fact, Danai decided to write the letter herself based on what she thought it would say.

“I had actually written what I believed he would have written me, so I was reading his words. That I wrote. I wrote myself a Carl letter,” she said. “It was a lot of, it feels personal to share, but some of the things you hear him saying to her in those final moments, being the strength, remembering moments he had with her that can keep him alive with her.”

“Like moments up to Terminus together and re-finding each other and the things she's done for his dad,” she added. 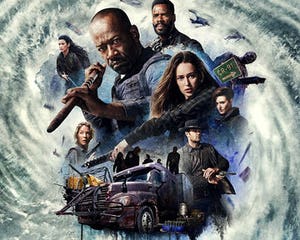 Rick vs. Daryl and Maggie

When the season ended, it was pretty clear that Maggie and Daryl weren't happy that Rick spared Negan's life, especially after all Lucille's master put them through.

“You're definitely going to see us in disagreement, but we're still a family,” Cohan said. “It's fun, it's been a pleasure to work together in pretty deep, pretty involved scenes.”

“We were curious too,” Reedus said of what that scene meant for Season 9. “We felt it but we didn't know where we were going next with it.”

Speaking about Maggie and Rick, Nicotero added, “They made a deal that Negan was done, they were going to kill him. When Rick spared his life and Maggie broke down, because of all the sheer emotion of what he had done to Glenn, he did to everyone around him. So, Maggie felt betrayed.”

“Some people, they're not at each other's throats,” he continued, “but they're not really down with the decisions their friends made.“

Reedus also teased a moment in the fourth episode of the upcoming season that is just "f--king epic." "It was really well written and we worked on it, really fine tuned it and got it to a place where it became effortless. I think both of us were really proud of that."

Can Negan Be Saved?

The big question for Jeffrey Dean Morgan was whether his character can find redemption after all the horrific things Negan's done.

“I think there is,” he said, before adding, “I can't say if we've shot anything like that.” He teased that we'll see “a very different side of Negan quickly. There's been a growing period, trying to figure out how to not go crazy in the position he's in.”

“I think there's redemption to be had for Negan, whether we see that, you have to ask Angela,” he added. BTW, Angela once again said to stay tuned.

What Happens After Rick Leaves?

While there have been reports that Reedus was going to take over as the show's lead after Lincoln's exit, he basically shot that down while talking about how the show will move on after Rick.

"To stay true to Andy and to Rick, we're telling the truth. We've had a season or two of two guys chest bumping ... this is a very female driven season right now and it's nice to have that happen," he said. "It's less bravado and more real depth this year. It feels like we're shooting a Western with feeling. There's love in this season. You can't take Rick's place in this show, that's not even possible. Everyone's playing the same characters, nobody's the lead now." 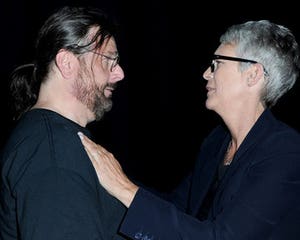 Corey Hawkin's character, Heath, has been MIA since Season 7 ... but we may eventually find out what happened to him.

Gimple teased, "I guess the best answer to that question is, yes, if circumstances play out right. It might not be on 'The Walking Dead' or 'Fear the Walking Dead,' but Corey Hawkins is an amazing actor and we only had him for a bit of time and now he's a movie star."

"But we want to work with him again and tell more about that character," he said. "There's a lot of flexibility built in because he's making movies."

Get Ready for Caryl

When asked to give an update to Caryl shippers out there, Reedus said his character and Melissa McBride's Carol have some sweet moments coming up, but wouldn't go so far as to call it a romance. And he's happy they haven't gone there yet.

"The two of those characters are so similar, they go on a journey … they interact with each other, but it kind of goes down the rabbit hole into something else," he explained. "One of the episodes has a really sweet, heartfelt moment and it's one of my favorite moments of the season. Those two will forever have their backs."

With Lincoln saying goodbye, that means Michonne will once again be solo. But before he goes, their relationship will enter a "new phase."

Lincoln said his final scenes with Danai were ones that left him leaving the set happy. "I rarely get happy, once a season I'll drive home happy with the day's work, but in the last 2 weeks of my filming, I drove happy 4 times. That's because I got to do scenes with all of these guys here, and Melissa McBride and a few other surprises and it was the reason I became an actor. We don't get actors like this in Europe. These guys, there's ambition, a desire to keep pushing and changing themselves. I've learned so much."

Of her costar, Gurira sung his praises too. "I always say this and I truly mean it, this is the only show I've worked on as a regular. I truly believe this is the best leading man on television, he has made us all better, his leadership, his character, his generosity, his kindness has really paved a path for all of us to carry on without him."

Speaking more about Michonne, she added, "She grows basically in connection with him from the second she meets him, saves his ass a bunch, because she can see the goodness and power in this man and how he takes on what he has to take on. I love how nuanced we got to be, even more so in this season. I'm excited for you all to see that, it's all heartbreaking, as 'Walking Dead' always is."

She also teased that her most "challenging" scene to film ever was one this season ... perhaps a goodbye to her man? The scene was delayed three times because of weather, and when she finally had her moment of "release" she asked for a medic.