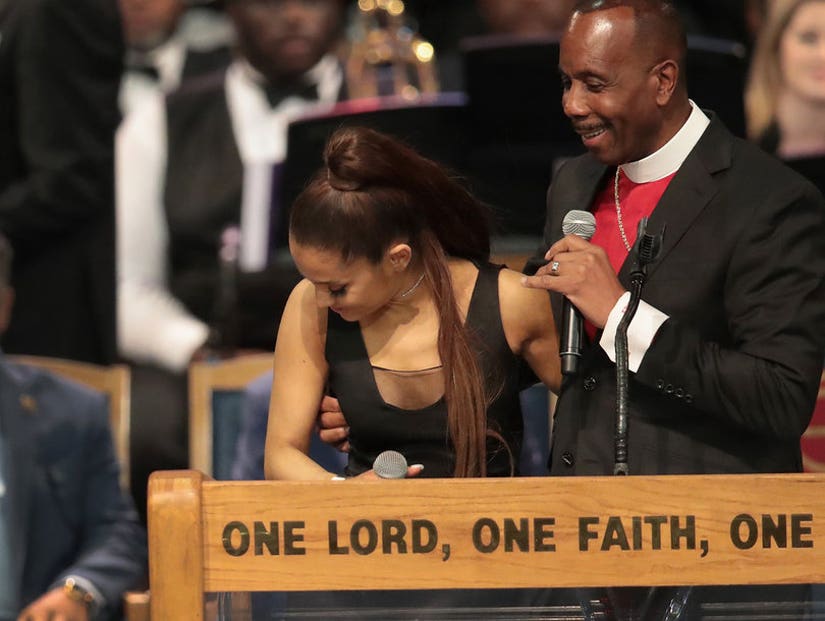 Bishop Charles H. Ellis III is apologizing after he was criticized for how he touched singer Ariana Grande, as well as a joke he made about her name during Aretha Franklin's funeral.

The bishop, who officiated the service, was just one of the reasons Grande went viral on Friday, as she was criticized as well for her dress being too short and for bringing Pete Davidson with her to the memorial.

But let's start with Ellis, who came under fire for appearing to touch her inappropriately after her performance of ("You Make Me Feel Like) A Natural Woman." Those watching the service quickly took to Twitter to sound off on how uncomfortable she appeared as he held onto her above her waist.

I don't care what you think about Ariana Grande, her music or her dress. This is wrong. That bishop's hand should not be on her breast: I just saw this because I've been working and not watching pic.twitter.com/ixVhgYBJTN

"It would never be my intention to touch any woman's breast," he told the Associated Press after the complaints surfaced. "I don't know I guess I put my arm around her. Maybe I crossed the border, maybe I was too friendly or familiar but again, I apologize."

"I hug all the female artists and the male artists," he continued, saying he hugged everyone throughout the service. "Everybody that was up, I shook their hands and hugged them. That's what we are all about in the church. We are all about love. The last thing I want to do is to be a distraction to this day. This is all about Aretha Franklin."

He also said he was sorry for offending anyone with his joke comparing her name to something you'd find on the menu at Taco Bell. "I personally and sincerely apologize to Ariana and to her fans and to the whole Hispanic community," he told the AP. "When you're doing a program for nine hours you try to keep it lively, you try to insert some jokes here and there."

Grande caught flack of her own for the black dress she wore during the service, which went down to her upper thigh. Even Smokey Robinson, a longtime friend of Franklin's who also performed at the funeral, told TMZ he thought it was inappropriate.

See some of the other reactions below:

Ariana Grande's ponytail is longer than her dress. #ArethaFranklinFuneral

Like, I get it, you're Ariana Grande but you're at the FUNERAL FOR THE QUEEN. HAVE SOME CLASS. You know every auntie in there is ready to tell her that her hair is longer than her damn dress. #ArethaHomegoing pic.twitter.com/ima45NwC3m

I know the church mothers are upset with how short @ArianaGrande dress is. #ArethaHomegoing pic.twitter.com/h0s0djbEJG

Jennifer Hudson in funeral chic. Take note Ariana Grande. This is how you dress for a Black funeral, not like you going to da club. #ArethaHomegoing

I'm just going to say it: Ariana's dress was disrespectful. Way too short for a pulpit.

You dress for the ocassion and the venue. Govern yourself accordingly. When in doubt, let the hem of your garment at least touch your knee. #ArethaHomegoing

Aretha in heaven looking at Ariana dress like #ArethaHomegoing
(She sound good though) pic.twitter.com/PP3eGZwXoY

Many also defended her outfit, however, after the backlash -- saying people should be more focused on the bishop's actions or simply telling them to shut up in general.

I think every woman can look at Ariana Grande's face and body language and viscerally feel what she's feeling. The tension. The nervous laughter. Not wanting to make a scene or make him angry. Every woman knows this feeling.

But google her and everyone's talking about her dress. https://t.co/VYikD43RnM

Y'all are talking about @ArianaGrande's dress being too short when we could be talking about this groping and how uncomfortable Ariana is? & the look on his face? Dear Jesus. pic.twitter.com/HO7i9y9WFP

If Ariana Grande's dress makes anyone uncomfortable, I'd suggest you check that demon within yourself and not blame that young lady for YOUR perverted mind and or the perverted minds of others whom for whatever complicit reason you choose not to check instead.#ArethaHomegoing pic.twitter.com/b0TBnWHloS

Fake woke twitter spent hours hating on Ariana because her dress was apparently "too short and disrespectful" yet they don't say a word about a grown ass man that supposed to be a "pastor" touching her like that in front of all these people#RespectAriana
pic.twitter.com/jRHqpmlPqZ

Ariana Grande's dress was not inappropriate or that short. Y'all just love to sexualize attractive women.

Others were also taken aback by Pete Davidson, Ariana's "SNL" star fiancé, attending the funeral with her. While it certainly makes sense she'd bring him, some found it surprising to see regardless.

watching ariana grande, pete davidson and bill clinton take a selfie together at aretha franklin's funeral is something even mad libs couldn't have predicted

Ok we all have limits and my limit is Pete Davidson sitting VIP at Aretha Franklin's funeral https://t.co/njiGLBUQtA

Aretha in heaven wondering how Pete Davidson got an invitation to her funeral. pic.twitter.com/nJCvU94wOa

oh how i wish aretha franklin were still alive so that she could comment on pete davidson attending her funeral pic.twitter.com/xhyW8YJdmA

For her part, Ariana hasn't tweeted since the service.