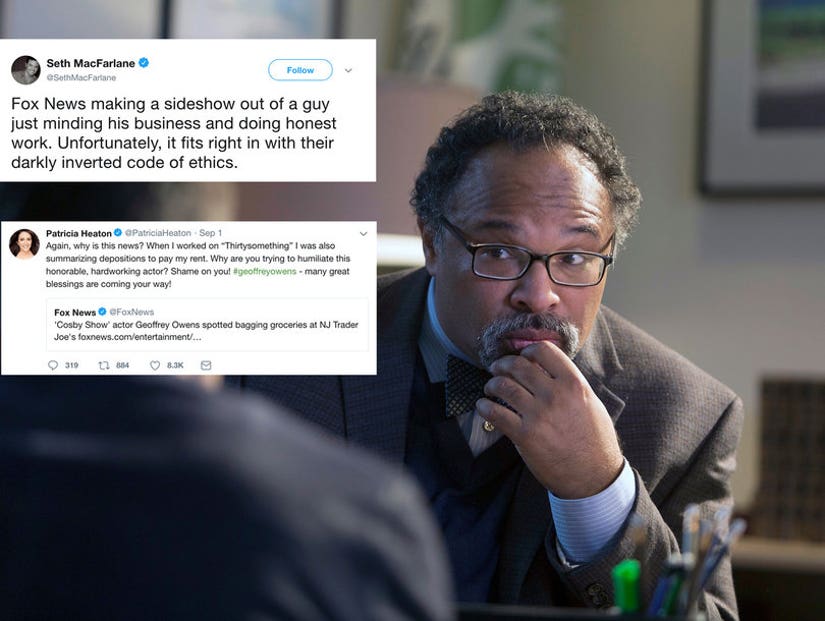 The world now knows former "Cosby Show" star Geoffrey Owens is a cashier at Trader Joe's in New Jersey, and fellow actors who are no strangers to day jobs are lashing out against Fox News for "shaming" the thespian for working for an hourly wage in between gigs.

"Fox News making a sideshow out of a guy just minding his business and doing honest work," tweeted "Family Guy" creator and actor Seth MacFarlane after he saw the story last week. "Unfortunately, it fits right in with their darkly inverted code of ethics." 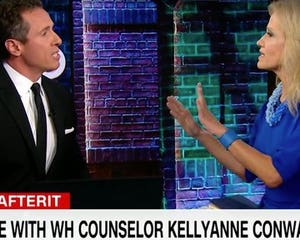 "This #LaborDay, we honor #geoffreyowens & ALL of the hard-working actors & artists who work 1, 2, 3 day jobs in order to pay the bills, take care of their families & still work to entertain us," the organization tweeted Monday morning. "#ActorsWithDayJobs, please share yours! We're here for u & will RT #ActorsWithDayJobs"

Although Fox is taking most of the heat, The Daily Mail was the original instigator in the situation, publishing pictures of Owens in uniform last Thursday. 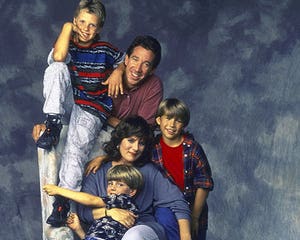 Karma Lawrence, the woman who snapped the picture of the 57-year-old working actor, told the Mail she was surprised to see the actor who famously played Elvin Tibideaux -- the husband of Cosby kid Sondra Huxtable -- on the classic sitcom working at a grocery store.

"I would have thought after 'The Cosby' Show he would maybe be doing something different," she said. "It was a shock to see him working there and looking the way he did."

To add more insult to injury, she added, "It made me feel really bad. I was like, 'Wow, all those years of doing the show and you ended up as a cashier.'"

Owens played Elvin on 44 episodes of "The Cosby Show," and has since racked up a total of 41 credits as an actor. Most recently, he's booked roles on CBS crime drama "Elementary," NBC drama "The Blacklist," HBO dramedy "Divorce" and even Fox show "Lucifer" (as pictured above).

Other prominent TV stars, including Patricia Heaton, Pamela Adlon and Blaire Underwood, were not happy to see Owens' day job becoming a national news story. And now thanks to the SAG-AFTRA Foundation, Owens' story has turned into a public awareness campaign encouraging actors to share their struggles to make ends meet while pursuing their passion.

Again, why is this news? When I worked on “Thirtysomething” I was also summarizing depositions to pay my rent. Why are you trying to humiliate this honorable, hardworking actor? Shame on you! #geoffreyowens - many great blessings are coming your way! https://t.co/8tgvW3iixr

#NOSHAME in good, honest, hard work. He's being a man in doing what he needs to do to provide for himself and his family. Much respect to you Sir! https://t.co/rQoNdnj6bd

I had been a working actor for years. Jobs stopped, as they do. I worked in retail. At a flower shop. I passed out flyers. It's about the work. Work gives you pride and purpose. Your visibility as an actor never goes away. But the money sure does. #geoffreyowens pic.twitter.com/BBzZaBrGBx

Lost in Fox's Geoffrey Owens shaming is that he is still working as an actor too, but SAG benefits are tiered to how much you work, and at 57 he probably needs more coverage than he's eligible for from SAG. Working actor reality is not what Fox viewers think it is. pic.twitter.com/y9eXkqj7bI

There are so many ridiculous misconceptions about actors I could write a book about it! A tip of the hat this #LaborDay to honor all #ActorsWithDayJobs. Hold your head high Geoffrey! I'm also a proud @sagaftra @ActorsEquity & @directorsguild member & supporter! #UnionStrong https://t.co/SbVu6jgE22

Right now I'm on the of the lucky few who gets to just be an actor. But for 15+ years, I was also an admin assistant, customer service manager, online community manager, freelance writer, telemarketer, & SAT tutor... & will do it again if I gotta. #ActorsWithDayJobs #LaborDay https://t.co/nAv5NTlSY6

Waitress, hostess, box office worker, nanny, receptionist, personal organizer. The norm for an artist is not being paid to do what we love, the norm is to HUSTLE and do whatever it takes to chase that dream. There is no shame in that—only pride. #ActorsWithDayJobs #laborday https://t.co/GypQs9HrLi

🙋🏼‍♀️Got a job as a hostess when I left General Hospital. Many didn't understand why I'd leave #GH without another acting gig waiting for me. (If only we could all be so lucky). This is what dedication to your artistic happiness actually looks like. #actorswithdayjobs https://t.co/t1nGRFf9Zz

Thank U @sagaftraFOUND I'm a proud, union working actor for 30 yrs & at various times, between acting gigs, I waitressed, painted houses, & cooked in a restaurant kitchen. Cheers to ALL actors who take care of themselves & their families. #LaborDay #ActorsWithDayJobs 💪🎭 https://t.co/WrwqAeTHYt

I have noticed many people assume @Johnhalbach and I are wealthy. We are not. We rent our apartment, the same place we have had for 8 years back when we were waiting tables. We almost never buy clothes or go on vacations that aren't part of our work. #ActorsWithDayJobs

#geoffreyowens Had my 15 minutes of fame as Phylicia Rashad's sister on The Cosby Show. I worked mostly when it was time to raise money to produce one of my plays. My husband carried our family. It was a huge sacrifice, but that was how I stayed in show business as long as I did. pic.twitter.com/llIsoExW57

I'll also add that GeoffreyOwens is one of the VERY few people on the planet who has acted on a hit TV show. That is something I'm certain that Karma Lawrence has never, and will never do. #Respect

In 2008, I left a job at KTTV voluntarily. Then the economy crashed & I couldn't find steady work. I struggled. At one point I called my agent & told her I was going to apply at Target. I wasn't ashamed. I needed to work. I had bills. And an honest days work is just that, honest.