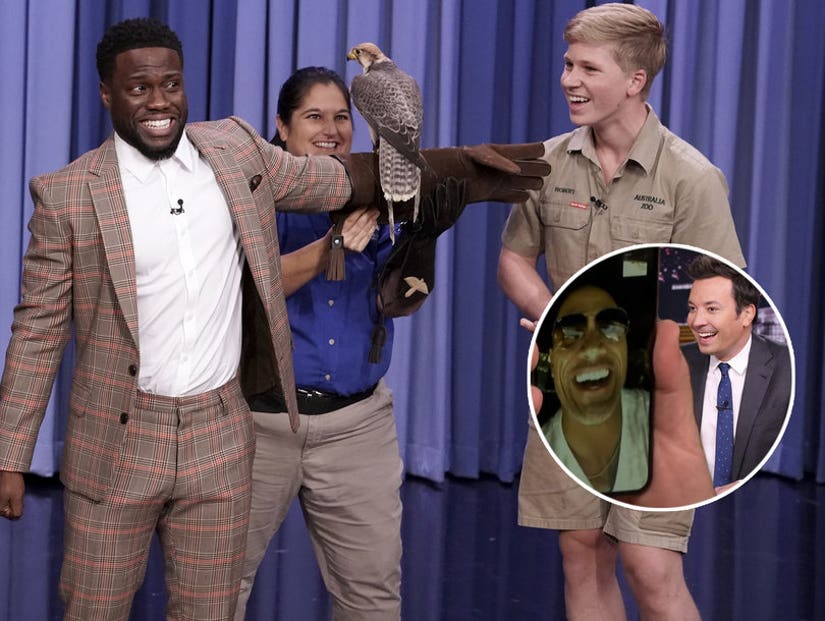 Find out why Hart exclaimed, "I got so much sweat dripping down my ass right now. I'm so nervous!"

The actor and comedian interrupted Fallon during his opening monologue and stuck around all night, as they did a number of pre-recorded sketches, interacted with Robert Irwin and a ton of wild animals and gave Dwayne "The Rock" Johnson a call. Spoiler alert: He only picked up the phone for one of them.

The night kicked off with Hart walking onto the stage to criticize Jimmy Fallon's opening joke.

"Oh my god, Jimmy, what are you doing, you're doing jokes about cats?" he asked. "Therapy animals, are you serious right now?"

Fallon's response: "I'm sorry, did someone lose their child?"

"You really make me laugh, Jimmy. Short joke, Jimmy? That's how original you are. Look at you. Just look at you. Has anyone ever told you that you got a big head, Jimmy?" Hart shot back. "Like a big head. I'm not talking about your ego, I'm just talking about an enormous-sized head. You know they had to create an IMAX just for the two movies that he made. There's two. There's two movies."

"You've made so many films in the last few years, have you ever thought of just slowing down and making one good one?" Fallon responded. "I'm so happy your co-hosting tonight. I'm really happy you said yes after Dwayne Johnson said no."

Hart then compared the host to pumpkin spice latte. "You're a little too sweet but the white people love you," he joked.

After bringing up Johnson during the monologue, Hart decided to FaceTime his "Jumanji" co-star and fill him in on his hosting gig for the night.

While The Rock didn't come to the phone when Hart called, he answered right away when Jimmy tried from his own line. Calling Fallon his "best friend," Johnson went on to talk smack about Hart, who, of course, was listening.

"You know what's crazy about Kevin, Kevin to me is like a little gremlin that I just want to take him and throw him into oncoming traffic," Johnson said, before singing the host "Happy Birthday" and signing off.

Speaking of the birthday boy, the 44-year-old host was given quite the present from Hart during the show: a new campaign photo of Hart modeling his Tommy John underwear.

Eyeing the very noticeable bulge in the image, Fallon cracked, "Wow, it looks like an easy photoshoot ... was it hard?"

Hart joked Fallon's would be walnut-sized.

The longest segment of the night included the late "Crocodile Hunter" Steve Irwin's 14-year-old son, Robert Irwin, who easily slipped into his father's shoes by introducing the studio audience to a group of exotic animals.

One problem: Hart was deathly afraid of nearly everything Irwin brought out, including an ostrich, tarantula, falcon and snakes.

When the latter came out, Fallon joked, "He knows how to deal with big snakes, have you seen his Tommy John ad? You gotta look at the picture, you'll know what I'm talking about."

Shaking with fear, Hart exclaimed, "My ass is sweating, I got so much sweat dripping down my ass right now. I'm so nervous!"

We gotta give major props to Irwin for remaining a total pro during all the ridiculousness -- watch Hart shake in his boots above.