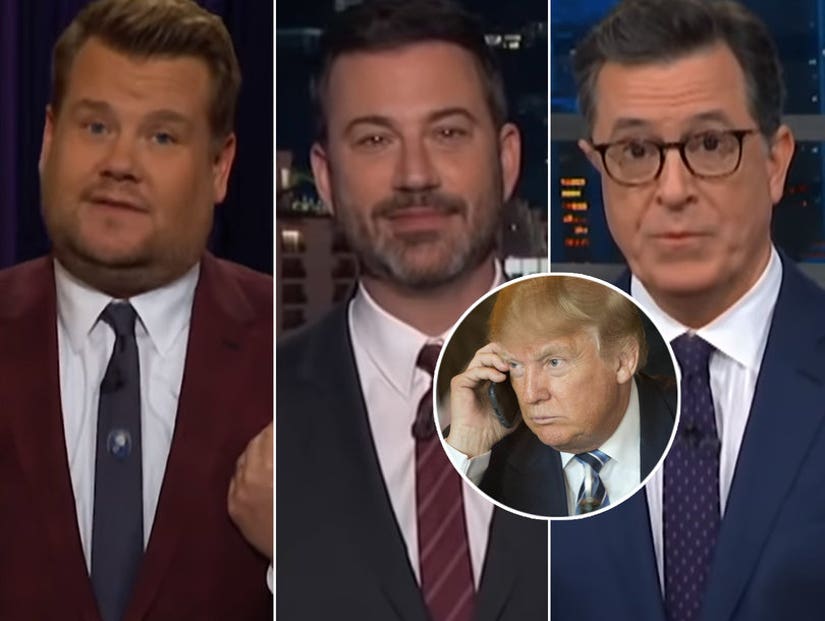 Almost all of them pointed out how POTUS used his iPhone to deny he regularly uses one.

While Donald Trump slammed a New York Times report alleging Chinese and Russian spies were eavesdropping on conversations he regularly has on an unsecured iPhone, he wasn't off the hook when it came to late-night hosts bagging on him for it.

James Corden, Jimmy Kimmel, Stephen Colbert, Jimmy Fallon and Seth Meyers all railed on POTUS over the report, with many of them making the same joke about the president's denial.

James Corden joked that the president doesn't even have "private thoughts," before pointing out how Trump failed by responding to the allegations by tweeting that he only has "one seldom used government cell phone" from said iPhone.

The so-called experts on Trump over at the New York Times wrote a long and boring article on my cellphone usage that is so incorrect I do not have time here to correct it. I only use Government Phones, and have only one seldom used government cell phone. Story is soooo wrong!

He then played a few mock phone calls from Trump to show what kind of classified information might have been leaked to spies -- as he talked about "major babes" in Wisconsin and plotting a Twitter war with John Cena.

He then joked that he felt bad for the spies who actually have to listen to Trump on a daily basis.

"Every day, some poor Chinese spy has to hear a McDonald's employee patiently explain to the president that he doesn't know when the McRib is coming back," he said.

Also pointing out the "Twitter for iPhone" tag to Trump's denial, Kimmel added, "He tweeted about rarely using a cell phone from a cell phone! He may not be a good president, but he is the LeBron James of internet trolls."

"The Chinese spies know Trump's most innermost thoughts ... right before he tweets them," joked Stephen Colbert.

He then referred to the New York Times adding that Trump probably wasn't leaking important intel because he rarely reads or understands his briefings.

"That's the most reassuring answer you could come up with, that the president isn't a danger because he's too incompetent to know anything?" asked Colbert.

Also referencing that iPhone tag on his tweet, the host joked, "Come on! That's like handing the judge your not guilty plea by writing it on the murder weapon."

Jimmy Fallon and Seth Meyers were shorter with their takes on the subject.

"Americans were shocked, they were like, you actually want to listen to Trump?" joked Fallon. "The White House staff can't get Trump to stop using his iPhone. They have a plan to make him get rid of it: they're going to change his wallpaper to the Mexican flag."

Meyers joked that Trump also has "an Android that he uses mainly as his Vice President," and added that "it doesn't count as eavesdropping if that's who you call."

"Hello, Russian spies?" he said, pretending to be POTUS.