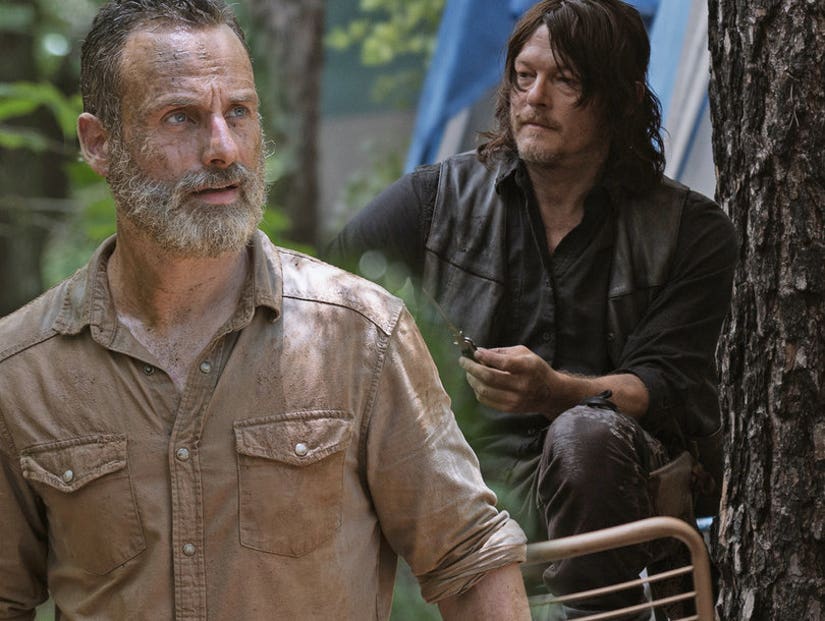 Andrew Lincoln's penultimate episode of the AMC series ends on quite the cliffhanger.

The future isn't looking too good for Rick Grimes, who will reportedly bid adieu to the world of "The Walking Dead" for good one week from tonight.

In star Andrew Lincoln's penultimate episode, his character clearly began saying a few of his goodbyes, before ending up in one very precarious position in the final moments.

With Maggie out for blood, Negan's mind games and Anne doing whatever the hell it is she's doing, it's all leading up to a sure-to-be epic exit for Rick next Sunday. For now, let's focus on "The Obliged" and the big questions we've got after watching the new episode. 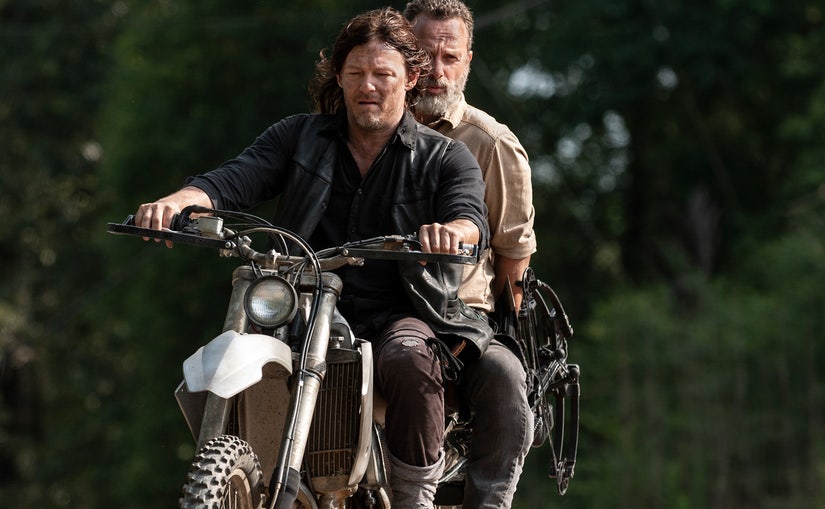 Who Did Rick Say Goodbye to For the Last Time?

When you're working with a cast as big as "The Walking Dead," you gotta start those goodbyes early and tonight, Rick did just that. If we had to venture a bet, we'd guess he won't be sharing much screen time next week with Eugene, Carol or even Daryl, as he left them all with messages that seemed very final.

With Eugene, he made sure to tell him that despite his past, the mullet master "got us here" and "after everything, that's everything." Eugene (and likely actor Josh McDermitt) even teared up as he walked away.

For Carol, he may not have been thrilled to hear she was returning to the Kingdom instead of helping the Sanctuary get back on their feet, but he left her on an optimistic note too. "If anyone gives me hope for how things can turn out, it's you," he told her before they parted ways.

As for Daryl, they had the most emotional one-on-one of the night, in a scene Norman Reedus said he was "really proud" of when we caught him at Comic-Con. He should be.

As Rick tried to intercept Maggie's attempt to kill Negan, Daryl offered him a ride, only to steer him further from her location. They then started fighting, before falling into a big hold in the ground. That's where things got real, as Daryl called out Rick for betraying Glenn's memory by keeping his killer alive. He said that by sparing Negan, he was only giving his followers "hope," before dropping the bomb that the Oceanside women killed those missing Saviors.

Choking back tears, Rick said that if Negan dies, he becomes a martyr and "the war was for nothing, every person who died, died for nothing. Carl, Carl died for nothing." Daryl told him that he was "chasing something for him that ain't meant to be," and should just "let [Carl] go." That, of course, will never happen.

If these are, in fact, Rick's last conversations with these three, it'll be interesting to see how they all reflect back on them after he's gone. 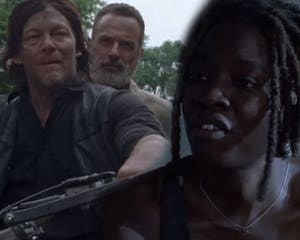 That Horde Won't Be the End of Rick, Right?

In the episode's last moments, Rick jump on horseback and attempted to steer a giant horde of walkers away from the bridge, only to end up surrounded. After being bucked off the horse, he landed on a brick of concrete and was impaled by a pole. It didn't look too good for him as a ton of very hungry zombies closed in.

There's no way in hell that Rick is going to die from this, right? While next week is supposedly his last episode, it'd be pretty damn frustrating to see him go out like that and without a proper goodbye to Michonne. The question is, who's going to be the one to save him at the last second? Could Daryl turn around? Will Maggie randomly show up instead? All we know is, someone better help a guy out!

And that being said, how do you think Rick will go out? If it's anything less than a hero's exit -- like saving the bridge that'll keep the communities connected and Carl's hopes alive -- we'll be truly disappointed. 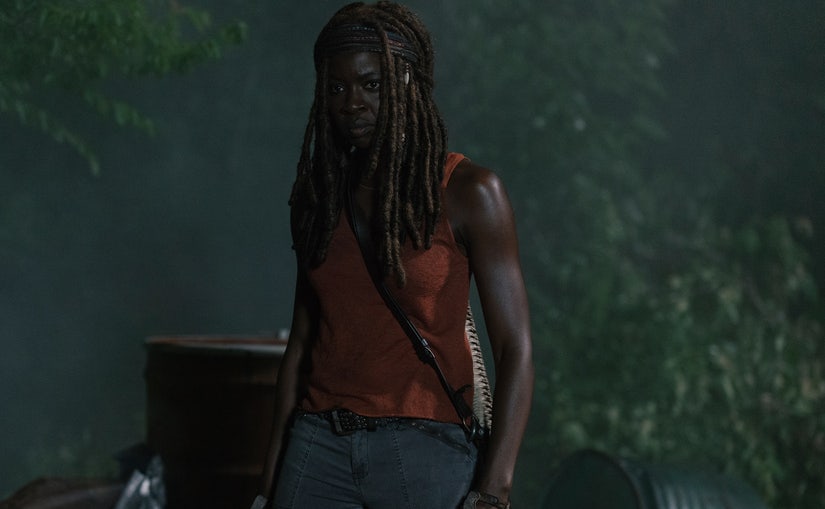 Will Michonne Hold Her Ground?

Aside from the Rick-Daryl convo, another dialogue-heavy portion of the episode was devoted to Michonne and Negan, as he made the case that the two of them are exactly the same.

While he had a point by saying they both itch for danger -- we see her battling insomnia by sneaking out of bed to kill walkers -- he lost her when he said she was probably "grateful" her son died, because he would have only made her "weak."

"You're connected to the dead, same as me. We are the same and you can't stand that we're the same," he told her, but Michonne wasn't having it. "I do get strength from the dead," she admitted, "but I live for the living." Though Negan relished in chaos, Michonne said her goal is to make the world better for every child who comes into it in the future.

He also tried talking her into giving him back his big, bad bat, but she didn't budge. He proved he's not fit to be released by then smashing his head into his cell wall.

Though she'd never admit it to him, you can tell there's part of Michonne that is worried she'll turn into Negan. She looks disgusted with herself after she kills a walker with a bat, and is again shook when she sees a baseball bat in one of Judith's books. Will Rick's exit push her further down a dark path or shake those worries right out of her? 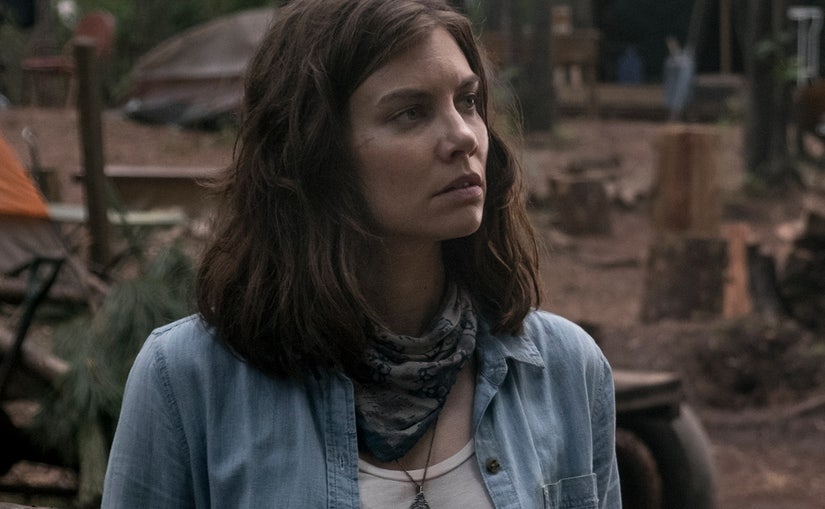 What Will Maggie Accomplish?

Maggie swung by Hilltop to pick up a crowbar and fill Jesus in on her plan to take out Negan. He was not on board. "Negan deserved to die when it ended, Rick was wrong because he made a call that wasn't his to make," he said, adding, "I just want to be sure that you're not wrong in the same way that he was. I want you to be sure."

She was sure, took off for Alexandria and that was the last we saw of her.

Provided Rick escapes from all those walkers and survives being impaled, the show is seemingly setting up one helluva showdown between these two over Negan's life.

We still doubt she's going to be successful in taking him out, but with actress Lauren Cohan's time on the show also running out, there's got to be some closure for this storyline coming. Our guess: Something will happen that will send her off to work with Georgie, but what? 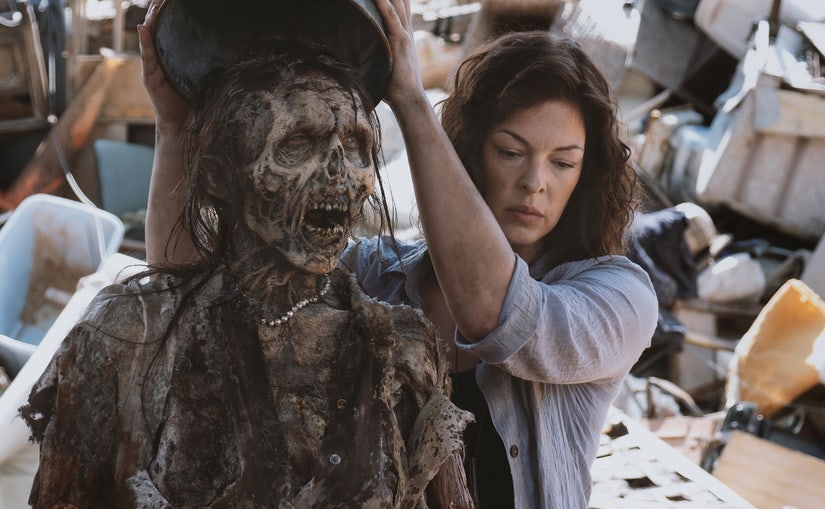 What the Hell Is Up with Anne?!

Yes, we asked this same question last week, but still got no answers.

After knocking out Gabriel and taking him back to her junkyard, she attempted to kill him with a walker bite ... but couldn't follow through. Instead, she knocked him out again and left him inside one of her shipping containers.

Where did she go, though? Is she on the run from the man she talked to on the walkie talkie last week, after failing to deliver an "A" to him? Or did she take off in that helicopter while Gabriel was unconscious?

We're demanding some answers here soon, hopefully after Rick's run is all tied up.

Are you sad to see Andrew Lincoln's time come to an end and what are you expecting from his final episode? Sound off below!