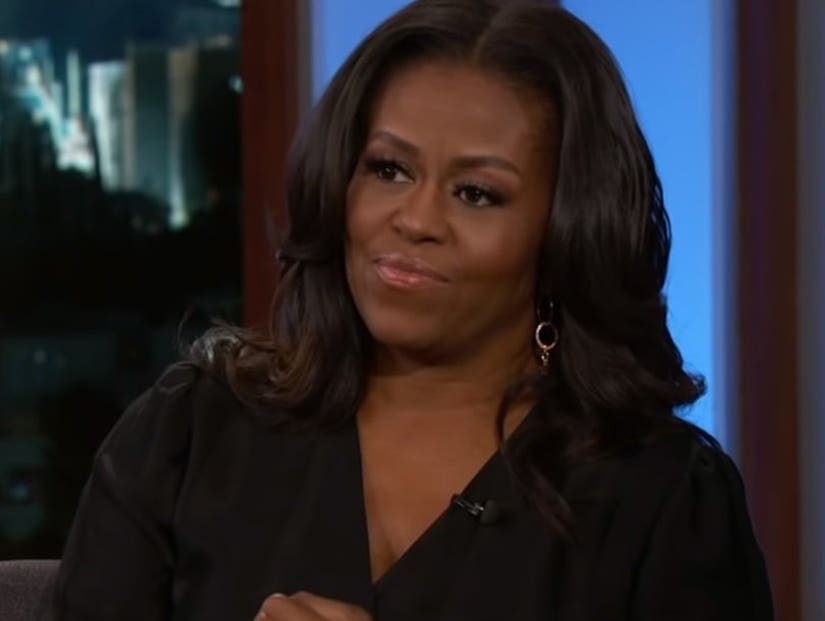 The former First Lady spills on her celebrity text messages, the First Dogs and her famous "freebie."

Michelle Obama is on one helluva press tour for her new book, "Becoming," and last night, she stopped by "Jimmy Kimmel Live" for a hilarious (and very revealing) chat.

While the former FLOTUS said her life with Barack Obama is pretty "boring" these days, the appearance was filled with some interesting tidbits about their days in the White House as she was asked about the food situation at 1600 Pennsylvania Avenue, dogs Sunny and Bo and whether she or either of her daughters could possibly step into office. 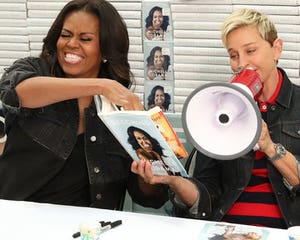 First, Kimmel asked Obama to reveal which celebrity in her phone she texts most often. And, yes, the answer made us instantly jealous.

"It depends on what's going on," she responded. "Lately, because Oprah kicked off the book tour and she was an early reader, I've been doing a lot of texting. Gayle is a worrier, so a lot of times she'll call, like 'What the ....' ... Oprah and Gayle, those two."

Imagine being on that text chain!

While Barack's time as POTUS is up, could Michelle, Sasha or Malia follow his lead? Kimmel made sure to ask about both options, after asking the family to "save us" a la Superman.

"Oh god, that will never happen," she said of her daughters running for president. "I can say never with those two." She added that if they did somehow become president, however, she would move in with them in a heartbeat -- under one condition. "I would, if they had kids," she said.

As for her own political future, she said people ask her to run for president "all the time," but it's not an idea she's seriously entertained. "I've never had any serious conversations with anyone about it," she told Jimmy. "It's not something I'm interested in or would ever do, ever."

While she had many jobs inside the White House, one surprising one she talked about on the show was organizing the schedule for their dogs, Bo and Sunny.

"[Bo] had a schedule, both the dogs did," she explained. "I would do briefing requests for them. They had to get my permission. I would find, in my briefing room, it would be like, 'Can Bo and Sunny stop by this press event?', there would a time and I had to approve of it."

Another surprise: they were responsible for paying for their own food, something she didn't have a problem with, but certainly caught her off guard.

"Rent is free, staff is free, we shouldn't be mooching off of the taxpayers," she explained. "It's a little shocking, because nobody really tells you this stuff. They let you get whatever you want, and then you get the bill for a peach and it's like, that was a $500 peach."

"I would tell Barack, do not express pleasure for anything unless I know how much it costs," she joked. "They're very responsive, at your expense. In all fairness, the taxpayers -- we want a certain kind of jam or jelly, we should pay for that." 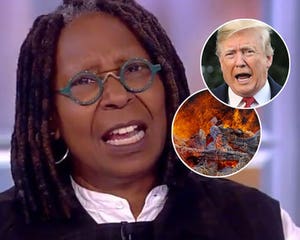 Referencing stories about Melania Trump calling for the firing of her husband's deputy national security adviser, Kimmel asked how she would have gone about giving someone in Barack's administration the boot. Her very diplomatic response: "Why do you ask ? We had wonderful people in our administration. Not one [situation like that]."

Even though she clearly wasn't ready to spill all with that response, Kimmel ended the interview by having her read off a list of "Things Michelle Obama Couldn't Say as First Lady."

The not-exactly-true revelations included Obama admitting she's never eaten a vegetable, revealing she confuses her two daughters and saying that George Clooney is her celebrity "freebie." Watch the interview in full above! 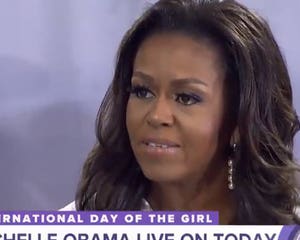