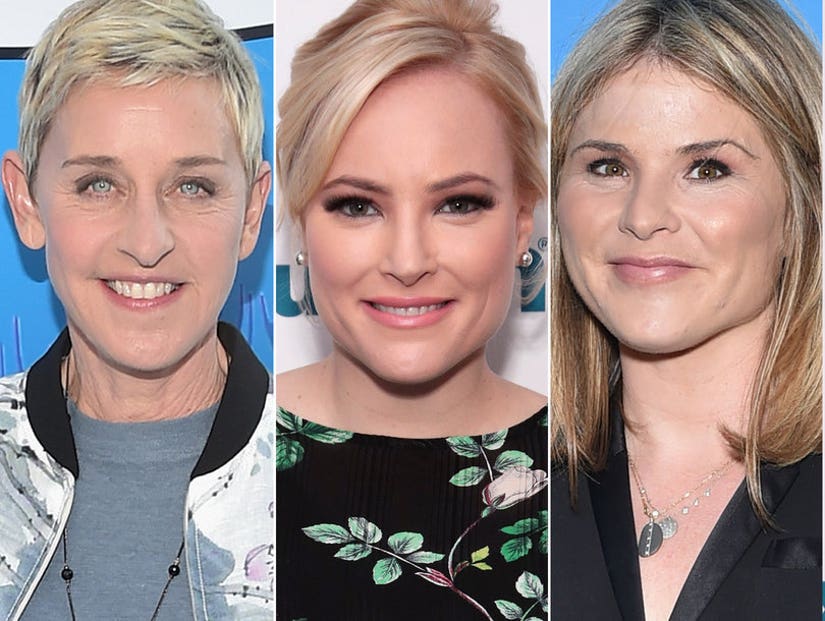 "I will miss him desperately but so happy he and my Grandmother are back together," Bush's granddaughter Jenna writes.

Bush, who was the longest living president in history, passed away Friday night at the age of 94. The politician's death, whose career spanned over three decades, comes seven months after the passing of his wife, former first lady Barbara Bush.

"Waking up missing this giant of a man who gave me everything," Jenna captioned a series of photos of her and her twin sister Laura with Bush. "He taught me and my family about service, family, decency, the power of gentle words and a beautiful heart. I will miss him desperately but so happy he and my Grandmother are back together."

"The View" co-host Meghan McCain tweeted, "I am incredibly saddened by the passing of President George H Bush. A member of the greatest generation and a real hero in his right. A true friend to the entire McCain family. We are all sending so much love, strength and prayers to the entire Bush family - God bless you all."

It wasn't just Republicans who posted tributes to the late politician, as vocal liberal celebrities including Ellen DeGeneres, Andy Cohen and more also took to their social media accounts to pay their respects.

"I will never forget George H.W. Bush and President Clinton meeting me in my old hometown of New Orleans to show support and raise money after Hurricane Katrina," Ellen wrote. "I send my love to his family tonight."

Cohen posted a photo of Bush and Barbara to his Instagram with the caption, "#RIP."

I will never forget George H.W. Bush and President Clinton meeting me in my old hometown of New Orleans to show support and raise money after Hurricane Katrina. I send my love to his family tonight.

America has lost a patriot and humble servant in George Herbert Walker Bush. While our hearts are heavy today, they are also filled with gratitude. Our thoughts are with the entire Bush family tonight – and all who were inspired by George and Barbara's example. pic.twitter.com/g9OUPu2pjY

Hillary and I mourn the passing of President George H. W. Bush, and give thanks for his great long life of service, love and friendship. I am grateful for every minute I spent with him and will always hold our friendship as one of my life's greatest gifts. https://t.co/1CYdrIeKmz

President George H.W. Bush led a long, successful and beautiful life. Whenever I was with him I saw his absolute joy for life and true pride in his family. His accomplishments were great from beginning to end. He was a truly wonderful man and will be missed by all!

I was very much looking forward to having a press conference just prior to leaving Argentina because we have had such great success in our dealing with various countries and their leaders at the G20....

....However, out of respect for the Bush Family and former President George H.W. Bush we will wait until after the funeral to have a press conference.

President Bush has left us for one last flight but his destination isn't unknown. He's flying into the arms of the love of his life, Barbara. This evening, each of us should take a minute to look up and offer him a silent thanks. FULL STATEMENT: https://t.co/XbuFYztrmg

Here is my statement on the passing of President George H.W. Bush. https://t.co/kGlxGrBsOB pic.twitter.com/rv1MPufx2G

President George H W Bush rejoins the heavens, adding his own point of light among the thousand he once so beautifully described. A nation mourns the loss of a leader, and a family their beloved father and grandfather.

We have lost a great American. Service defined President George H.W. Bush's life, and he taught all of us about leadership, sacrifice and decency. We send our deepest sympathies to the Bush family.

My heart aches knowing George Bush 41 has passed. An authentic caring human being who never hid his truth. He will always remind us 2 exemplify that wining will never be our legacy. His love for life and family will live on RIP dear soul.

My condolences to the Bush family on their tremendous loss. President George H W Bush spent his life in service to our country. Though I didn't agree with most of his policies, I appreciate and respect his dedication as our President and VP, and his love of our country.

First question:
Did you also use the cover of George H.W. Bush's passing to have an “on the feet” meeting with Putin? https://t.co/MwTb49kmyf

My grandfather was the greatest man I ever knew. His life spanned the American Century—he fought in World War II ... took part in the Texas oil boom ... served out a distinguished career in public service including serving as president during the final days of the Cold War. pic.twitter.com/6i68EPVC3j