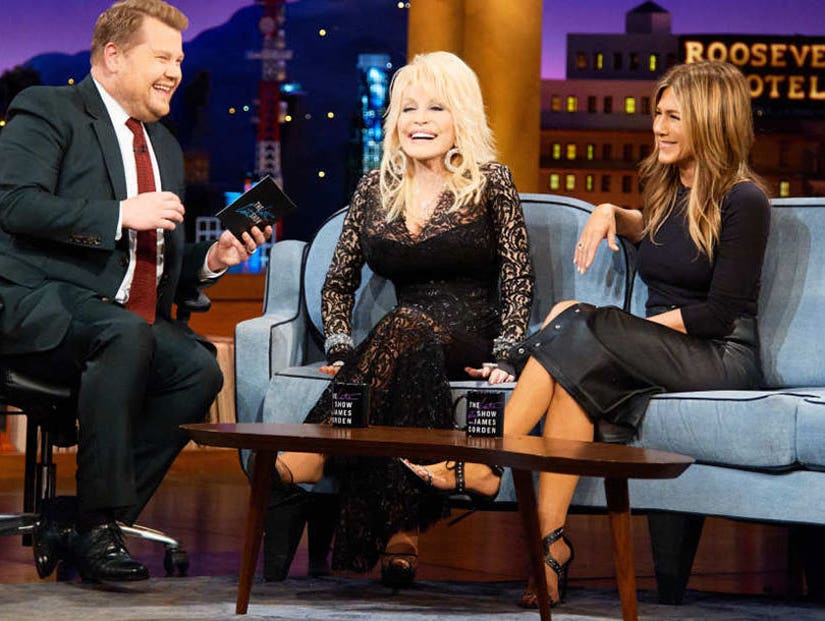 James Corden was in for a rollicking good time when he was joined by "Dumplin'" friends Jennifer Aniston and Dolly Parton on "The Late Late Show" Thursday night.

The pair became fast friends working together on the Netflix film, which Aniston stars in and produces while Parton provided several new, original tracks -- scoring a Golden Globes nom for one of them -- and their easy chemistry was on full display as they planned a "Friends" spinoff, talked about Jennifer's haunted house, Dolly's wigs and the country music legend had to say which "Friends" guy she would hook up with. 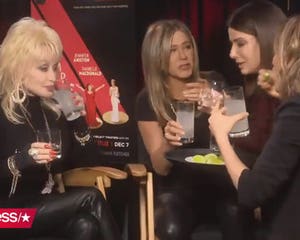 It was all Corden could do to keep up with the ladies, as they looked like they could have handled the full interview without them. It would have been an absolute hoot to watch, as they're both so quick-witted and funny, riffing off of one another and finding the funny twist in almost anything.

Of course, any time you have a cast member of "Friends" on as a guest, you're going to ask them whether or not they'd be interested in a reunion or revival of the show. In today's era of television revivals, the demand would be through the roof for new episodes of "Friends." You thought people were excited about the return of "Will & Grace."

"Listen, the girls always say we would love to do it again and the boys are a little less excited about it, for some reason," Jennifer explained. "I don't know."

But that doesn't mean we are without hope, because all that needs to happen is a brilliant mashup with another iconic show. "We've decided that we'll just do -- and I've said this before -- we'll just do a remake of the 'Golden Girls' in 40 years. Just kind of go out on wicker chairs."

We say, why wait 40 years. Rue McClanahan, who was the youngest of the "Girls," was 51 when "The Golden Girls" first hit the air. At 49, Jennifer is nearly the same age, so why not start developing it now.

When James dared suggest that Jennifer, Courteney Cox and Lisa Kudrow would be taking on the iconic "Golden Girls" roles, Jennifer properly shut him down. "What if we're Rachel, Phoebe and Monica as just golden girls?" she asked. 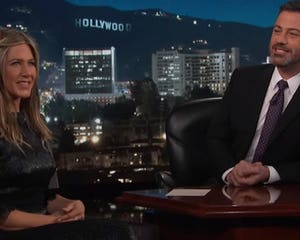 One of the funnier stories that's been circulating during the promotional tour for "Dumplin'" is how Jennifer Aniston named her dog after Dolly Parton. She shared the story shortly after meeting the country singer and later worried she might have offended her.

"When I first found out about it, I didn't know if it was an insult or a compliment," Dolly admitted. "I thought, is she saying I'm a dog?"

Since that time, though, Dolly has learned that it was meant as a tremendous compliment and honor, and she's had the opportunity to meet her namesake when she spent time at Jennifer's house.

"I met the dog and then as the night went on, it kind of got a little embarrassing because there were other people and she was saying, 'Dolly, don't pee on the rug,'" Dolly lamented.

"But Dolly is very well trained," Jennifer interjected about her human guest. "She went to the bathroom." 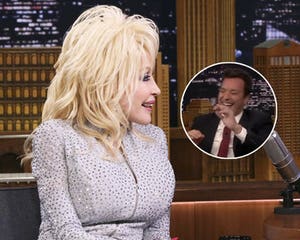 Long before fame and success, Jennifer lived with a roommate shortly after moving to Los Angeles. And then, she had what she described as the most Los Angeles experience ever when she discovered her house was haunted by a ghost.

"I was like, Oh man, I have landed in Los Angeles," she said. "You're talking about ghosts, spirits and a ghost whisperer."

But she went full native and hired a ghost whisperer to come to her house, and while the woman was there things only got freakier.

But while Jennifer wasn't laughing at all while it was happening, both James and Dolly were cracking up when she revealed why the ghost was acting out so much. "He hated my roommate," Jennifer told them, based on what the ghost whisperer told her.

So did she tell the roommate the problem so they could figure out what to do? "No, I moved out," Jennifer admitted. And to this day, she has no idea what happened to that poor young woman. 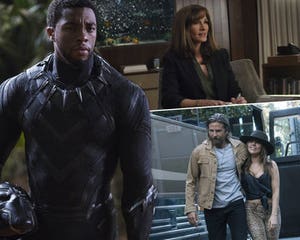 Of course, James couldn't resist asking Dolly about her massive wig collection. She's joked at times that she has a wig for every day of the year, but admitted she doesn't really count them.

"They're my little handicaps," she said. "I never have a bad hair day. It may not always look good to you, but if I don't like it, I just go pick another one."

They then got to talking about Jennifer's iconic hairstyles as Rachel Green on "Friends," which started a genuine trend across America. And so, James challenged her to bring back a lost hairstyle.

"If you did it every day for a month, I guarantee every salon in America will be full of people going, 'Can i get that crimping thing Jennifer Aniston does?'" he told her.

"Or they'll be like, 'Oh, it's a shame about Jennifer Aniston. Must be a midlife crisis,'" Jennifer joked.

But we kind of think he might be right. Everything old is new again and yet crimping has yet to come back in style. If anyone can do it, it's Jennifer Aniston. Maybe she can revive the "hair wall" bangs again while she's at it. Maybe some things are best left in the past. 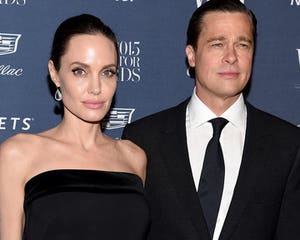 To wrap up their time together, James challenged Dolly to play a game of "Dollywood or Dolly Wouldn't." The premise was simple enough, but Dolly still took the rules into her own hands. She had no problem playing the sampling of instruments he provided, but things took a turn when he brought out a picture of those reluctant "Friends" boys.

James tried to turn it into a variation of "F--k, Marry, Kill" that got way, way, way too complicated, so Dolly just focused on a much simpler way to look at it. Which of those handsome young men would she most hook up with.

Dolly looked over at Jennifer and said, "Ross was with you. Now we're girlfriends, we wouldn't do that."

In fact, she had a pretty logical breakdown for all three of the guys. "[Chandler] had Monica, [Ross] had [Rachel] and Joey probably had the clap and syphilis," she laughed.

She did finally make a choice, and it's the same choice most of America was making at the time. Check out the whole game in the clip above.

Then, catch the music of Dolly Parton's music and the awfulness of Jennifer Aniston as a narcissistic pageant mom in "Dumplin'," now streaming on Netflix. 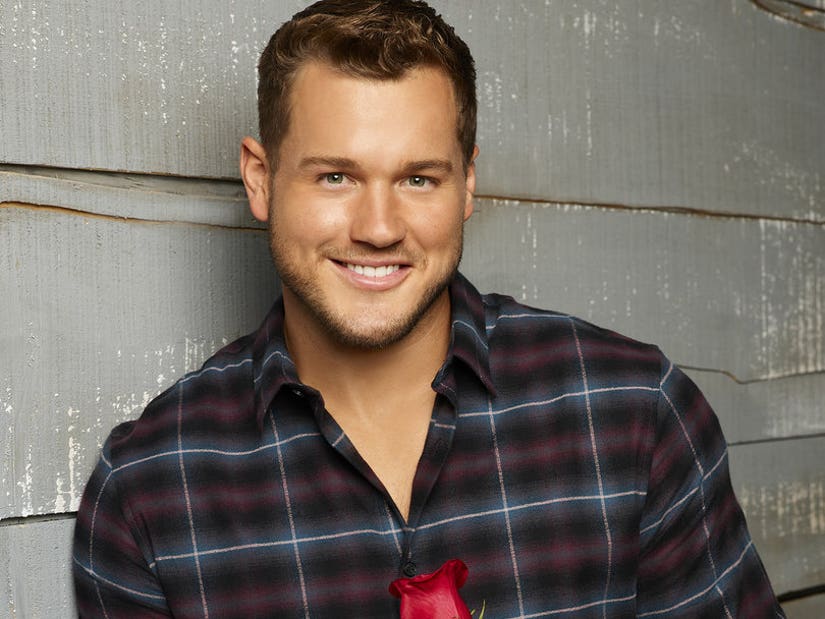