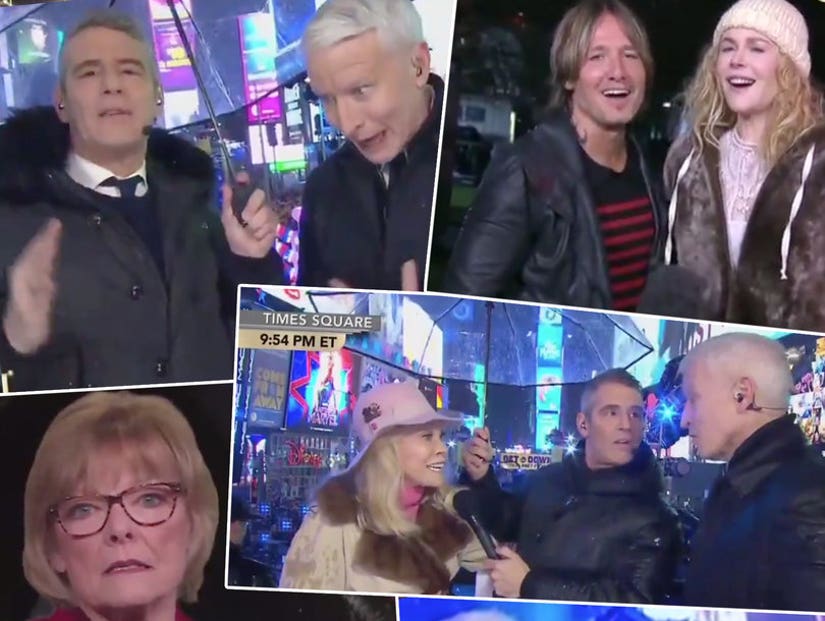 BFFs Andy Cohen and Anderson Cooper once again took over CNN on Monday night to host the network's annual New Year's Eve special and, once again, it did not disappoint.

The duo took the reigns for their second year in a row hosting the evening's festivities, after Cohen replaced Kathy Griffin when she was fired over the now-infamous Donald Trump photo in 2017.

The show was trending all night, thanks to Andy's antics and a few of their special guests. Among the many stars paraded out during the telecast: Gary Oldman, who popped up in Las Vegas to do a magic trick with Criss Angel. Talk about random!

Here are 7 more moments that had everyone talking!

"It's a boy!" @Andy Cohen reveals the gender of his first child, who is expected to be born in early 2019. https://t.co/kc4HtOcDeE pic.twitter.com/APW0kjocAz

Andy Cohen announced earlier this year that he's going to become a father via surrogate in 2019 and, last night, the host revealed the gender of his baby-to-be.

"It's a boy and I gotta tell you something, I cannot wait to meet this boy," Cohen said during the special. "I'm so excited. You know, when I was growing up, I just never thought it would be possible as a gay man to grow up and have a family and then here we are ... anything's possible and I'm so grateful."

Nicole Kidman and Keith Urban also talked to the two from Nashville, where she gave Andy some sweet advice for being a father.

Nicole Kidman and @KeithUrban give advice to @Andy Cohen about caring for a baby:

“Love that baby … The more loved a child is, the better they are in the world.” pic.twitter.com/YOF1R9ZLkZ

It was a wet night in NYC and Cohen threw a fit on air when he was told by the Times Square Alliance that he could no longer hold an umbrella while filming.

After fighting with the Alliance off-camera for over an hour, Cohen called them out during the show. "I said I won't do it," he explained, "I said get the paddy wagon, because that's what it's going to take!"

He said they then threatened to pull CNN's credentials for next year. "What does the Times Square Alliance do besides eff with my New Year's Eve?" he asked. "This is some Grade A BS. Honestly!"

Through the night, the two hosts took shots at the top of every hour -- and Anderson's reaction face each time was just pure gold.

"I feel like my lungs are scorched," he said after throwing back a shot of tequila. And it didn't get any easier for him as the night went on.

Anderson Cooper talks about his mom's sex life, says she "hooked up with" Marlon Brando: “She and Carol Matthau both watched the movie and both made a deal they were going to 'meet up' … Carol got it first and then set it up for my mom. It was a 'one night date.” pic.twitter.com/406dGiFUgO

During an interview with Faye Dunaway, Cooper took it upon himself to spill some old Hollywood gossip.

Faye looked shocked as he continued, saying it was around the "On the Waterfront" years. "She and Carol Matthau both watched the movie and both made a deal they were going to 'meet up,'" he continued. "Carol got it first and then set it up for my mom. It was a 'one night date.'"

CNN guest Jane Curtin: "My New Year's resolution is to make sure that the Republican Party dies." pic.twitter.com/fHmcpwaFgi

Throughout the night, the hosts showed prerecorded videos of celebrities giving their New Year's resolutions but none were as instantly meme-able as Jane Curtin's.

Her resolution: "To make sure that the Republican Party dies."

During a live shot from Key West, CNN's Bill Weir accidentally said "cock" live on air, instead of "conch."

He tried to recover, but Andy and Anderson definitely heard his mixup. Their reaction faces say it all!

“We're there and we see you, and let's hope the new year brings better things, and you're not alone” —@andersoncooper's message to all those feeling alone or going through a tough time on New Year's. pic.twitter.com/p6RTtytsDb

Anderson Cooper ended the night by reflecting on the LGBT community and what he saw as major progress going into 2019.

"You know what's incredible about this? If you stop and think about it, for generations, gay and lesbian and transgender people lived in the shadows in this country and around the world," he said. "And now on this day, this year, you and I can be hosting a New Year's Eve celebration, [Richard Quest] is with us, Don Lemon is with us in New Orleans and we're highlighting a drag queen drop."

"It doesn't have to be in the shadows anymore," he added, "and it's people expressing love openly, you're having a son and that's 2019."

He also spoke to those watching at home who might be struggling or going through a hard time, telling them, "We're there and we see you, and let's hope the new year brings better things, and you're not alone."