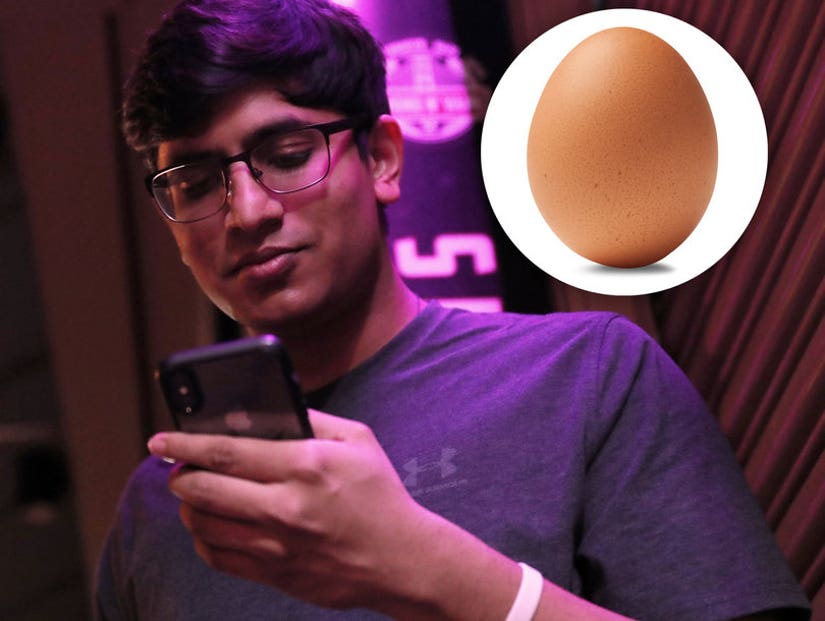 Ishan Goel tells TooFab why world_record_egg struck such a powerful pop culture chord, and warns about the dark side of viral success.

A stock photo of an egg dethroned Kylie Jenner's baby's picture as the most-liked Instagram post of all time earlier this week, but it was no accident.

While TooFab was trying to track down the individual(s) behind the world_record_egg account taking pop culture by storm, we got in touch with Ishan Goel, the 19-year-old viral marketing guru taking partial credit for the world's latest viral sensation. As of this writing, the account has attracted 7.4 million followers, and its single post has been liked by nearly 47.4 million people. To put that staggering figure into perspective, that means nearly 15 percent of the United States population (325.7 million) or more people than Canada's entire population (36.71 million) have flocked to "like" this egg.

"I hopped on when it was just under a million likes," he told us. "I reached out via direct message on Instagram and offered to help take it viral." 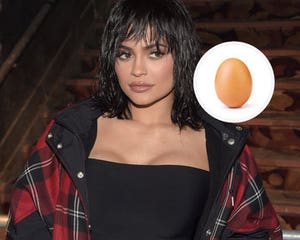 Goel presented TooFab with a screenshot of his conversation with the person behind the viral account to prove his validity. We've reached out to the account for additional confirmation, but so far, no word back. But of the 916 Instagram accounts that the most famous egg in the world follows, Goel's is one of them.

A quick Google search proved Goel isn't a stranger in the booming business of viral marketing -- a tool that can be used to generate a piece of intellectual property to monetize (like this egg) or can introduce an existing product to the masses (lookin' at your rainbow poopin' unicorn, Squatty Potty!). Goel's expertise in the field has already been recognized by Inc. and Forbes because he's something of a social media prodigy. He got his start at just 13 by raising the most money for his school's American Heart Association program, "Hoops for Heart," and then launched his own marketing firm at 14. By 15, he was working for billionaire Mark Cuban.

"I specialize in crafting marketing and communications strategies for corporations and public figures," he said. One of his biggest clients was Super Bowl Selfie Kid, aka Ryan McKenna -- who rode his viral wave of fame all the way to "The Ellen DeGeneres Show" -- and is now a certified Instagram influencer getting paid to take selfies around the world and share them with his 241,000 followers. "I built his brand from scratch working closely with him and his family," he said.

Goel caught wind of this record-setting egg from an acquaintance he met on a plane.

When asked what sparked the momentum for the egg, he said, "I think it began as a fun project that people initially shared for the comedic value. I saw it at that infancy stage and realized it had the potential to actually become something that the internet would rally around."

The egg -- a readily available stock picture photographed by Sergey Platonov, who had no involvement in the Instagram sensation beyond that -- was introduced to the world on Jan. 4 with a challenge: "Let's set a world record together and get the most liked post on Instagram, beating the current world record held by Kylie Jenner (18 million)! We got this."

"There are two core reasons that this post took off," Goel told TooFab. "The first is that the internet fell in love with the idea of using a crowdsourced approach to be able to have a touchpoint to a celebrity that could potentially influence that celebrity's actions or, at the very least, garner a response from them. The second is that the internet quickly began to see it as a challenge, which inspired people to invest their time and energy into helping drive the post into a frenzy."

Fear was Goel's personal challenge and motivator when he took on the endeavor. "While the post was still in the hundreds of thousands of likes, I started telling everyone that I was going to take the post viral and help the account beat the world record. I couldn't fail."

But, like, why did his clients choose an egg, of all things? "For starters, it is a good-looking egg," Goel joked. "But seriously, I think the idea was to choose a silly, inanimate object that people would find endearing. People have personified this egg."

And copied it, too. Ellen DeGeneres hopped on the trend by Photoshopping Kylie Jenner's face on the egg, calculating that the combination of the Instagram juggernauts would result in 51 million "likes." Miley Cyrus used the trendy image to shut down speculation that she's pregnant. Nintendo got in on the action by posting a photo of a Yoshi egg on Instagram.

Even Ellen, who has 64.3 million Instagram followers and several TV shows, couldn't replicate the success of the world_record_egg. So far, her parody has only generated 4.3 million "likes," and Nintendo's effort has resulted in 475,304.

Perhaps they should hire Goel. 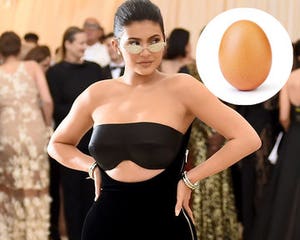 The teenage entrepreneur's strategy was leveraging his network of influencers, media contacts and internet marketers. "I simply got the right credible people to vouch for the post and help propel its growth," he explained.

One only needs to scroll through his Instagram feed to see a sample of the influencers he has access to. Backpack Kid, Jake Paul, Gary Vaynerchuk and "13 Reasons Why" star Alisha Boe all make cameos on his page, which he has brilliantly decided to redirect to form a valuable domain purchase: www.WorldRecordEgg.com. "I saw the opportunity of taking something viral, and I seized it," he told TooFab, stressing that he is not the creator of the record-breaking egg.

Although Goel is no longer working with the anonymous creator(s) of the world_record_egg, he wouldn't crack when we asked for any details surrounding the identity of the individual(s) behind the sensation. So far, the account has represented itself to the media as a chicken named Henrietta, who has has been responding to press inquiries using lots of poultry puns.

When we asked Goel why it's so important for the creator(s) of the egg to remain anonymous, he said, "Because the anonymity keeps this topic alive longer."

And even though the viral marketing guru doesn't expect the hype to last much longer, it is in the egg account's best financial interest to milk this publicity for all its worth. Whoever is running it has opened an official online store called "The Egg Gang" that is selling apparel ranging from $20-$32. Even just 1 percent of the 7.4 million followers buying a T-shirt will make this gang of chickens some rich mothercluckers. That's a gross haul equaling $1,480,000.

"Going viral is a blessing and a curse," Goel warned. "Overnight success is often very mentally and physically tasking. Quick money and/or fame can be a recipe for disaster. Families fall apart. Friends show their true colors. The creators can become depressed. Meaningful relationships often fall by the wayside. It can be a short-lived whirlwind of pseudo-success that leaves the creators in a worse position than before they started."

Although we don't know much about the mystery person(s) or "gang" behind the world_record_egg account, the screenshot Goel provided us to confirm his collaboration with the owner(s) did reveal they're younger than 19. Mashable and The Independent have reported the person behind the mysterious account is a man who lives in the London area who has used the name Eugene in some interviews.

All this seems like a lot of Instafame and sudden wealth for a teenager to manage. But as Goel has proven, age is just a number. "It is all up to maturity level, the quality of their preexisting relationships and their emotional state going into it," he said, adding that he hopes his success story will inspire more young people to take control of their careers before they're old enough to drink.

"I am very much a lone ranger in my particular trade," he said. "I hope my story can enable more teens to push limits and start their careers earlier on. Experience will always be more valuable than anything else, and getting started early lets you gain an edge on everyone else."

And we had to ask: What does over 47 million "likes" for a stupid egg say about culture?

"To me, it mostly indicates that people are yearning to find ways to connect in this increasingly digital world," Goel said. "The egg represents a common goal, a shared vision that people around the world could get behind." 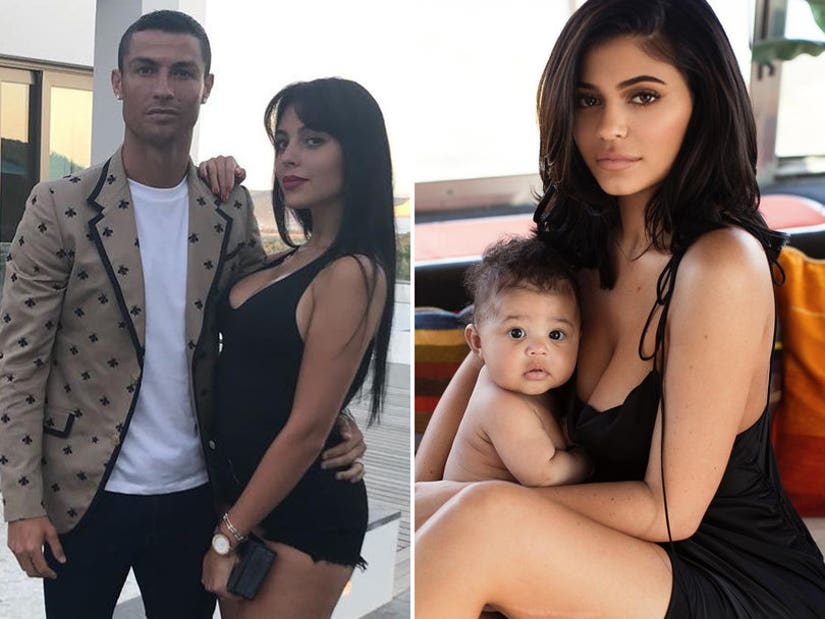