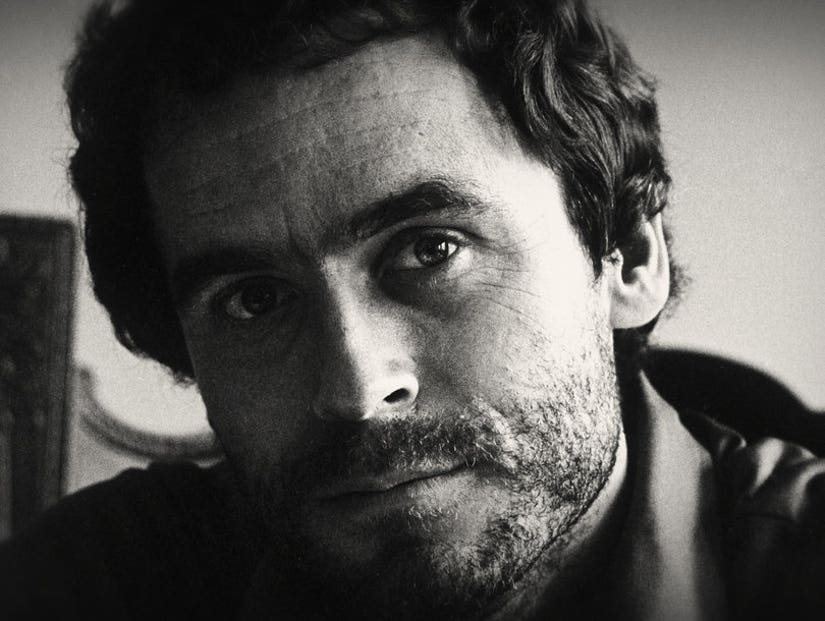 "All I see is the Joker minus the makeup," writes one viewer.

Ted Bundy surprisingly began trending on Twitter today, thanks to a new documentary from, who else, Netflix.

Debuting on the streaming service this morning, "Conversations with a Killer: The Ted Bundy Tapes" reexamines the case and features excerpts from audio interviews journalists Stephen G. Michaud and Hugh Aynesworth did with Bundy on death row in 1980. According to Netflix, some of the audio has never been heard before.

The serial killer brutally murdered and assaulted at least 30 women before he was caught in 1978. His trial became a media circus as he attempted to defended himself in court, won the support of female fans and even proposed to his girlfriend while she was testifying in his in favor. (FYI: She said yes)

While Bundy was executed in Florida for his crimes 30 years ago today, the narrative of him being a "good-looking" guy continues to this day. As the docuseries and those in it comment on his looks and charm, viewers have turned to social media to try and put an end to it once and for all.

For now, see what viewers at home have to say to anyone swooning over the murderer:

I've never never understood this inordinate focus on how “good looking” Ted Bundy supposedly was. Am I missing something? He...looks like every white guy you'd pass in a shopping mall. https://t.co/1YeaR1N9IM

Why do documentaries keep saying ted bundy was handsome? That man was UGLY

To the people puzzled at Ted Bundy being called “good looking,” you need to understand that the Florida male standard of beauty by comparison at the time was (and still is in some parts) Joe Dirt. pic.twitter.com/7LegsnAvVJ

Me when I see Ted Bundy described as attractive pic.twitter.com/ZkshPxY2nK

Women seriously need to stop romanticizing serial killers. That's great disrespect to the victims and is so wrong on all levels.

Ted Bundy was defended because he was "handsome" and Chris Watts is getting love letters.

Everyone else: Ted Bundy was able to get away with it because he was so good looking.

Every episode of the Netflix Ted Bundy doc: "He was very good looking."

Seriously how low was the standard in the 70's?

Wondering how many times it's going to be mentioned that Ted Bundy was “good looking” in this Netflix doc bc all I see is the Joker minus the makeup pic.twitter.com/hagkxv7fDD

why does the netflix ted bundy doc keep talking about how "good looking" he is?? guy is a munter AND a murderer.

To the ladies who thought so, sorry, Ted Bundy was just not that hot.

Watching the new ted bundy documentary on Netflix and I'm gravely concerned for the girls who think he and other serial killers are hot...like are you ok?

Ted Bundy is not hot, he was never hot.

why does everyone call ted bundy hot...he ugly as fuck

Ted Bundy was ugly any way idk what y'all on. He's just comparably ok as far as serial killers go

Really don't understand the hype behind ted bundy he was so UGLY??? Now RICHARD RAMIREZ on the other hand!!!!

I don't understand why Ted Bundy is always referred to as handsome. I know I have iffy taste but he's just not is he? Even young photos he looks like a middle aged man who's smoked a lot 🤷‍♀️

With the new Ted Bundy documentary out, now is a good time for me to once again express my shock at anyone referring to him as handsome. I see your opinion and I raise you his one eyebrow.

Further muddying the waters is the upcoming film "Extremely Wicked, Shocking Evil and Vile," while stars the hunky Zac Efron as the killer himself.

That debuts at Sundance this weekend, while "The Ted Bundy Tapes" is on Netflix now.