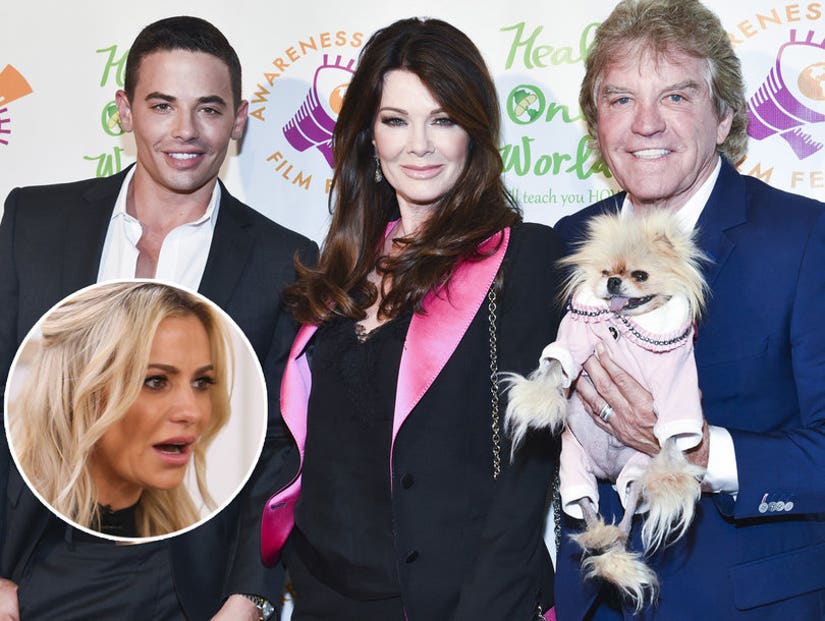 The executive director of Vanderpump Dogs says he didn't "appreciate" Lisa Rinna's comments about him, either.

Dr. John Sessa, executive director of Vanderpump Dogs, is telling his side of the story in the wake of "dog-gate," which has completely taken over "The Real Housewives of Beverly Hills" and caused a major rift between Lisa Vanderpump and her co-stars.

John made quite the splash on the Season 9 premiere when he brought out -- in front of Kyle Richards and Teddi Mellencamp-Arroyave -- the dog Dorit Kemsley had adopted from their West Hollywood dog rescue center. Dorit said the dog bit her children and husband and was therefore not a good fit for her family, so she gave her to someone she believed would provide a better home. According to Dorit's version of events, which she shared with Andy Cohen on Tuesday's "Watch What Happens Live," she told Lisa "immediately."

Kyle backed that version of events in her Tuesday night blog, writing, "When Dorit called Lisa to tell her what happened and that she had to find a new home for the dog, Lisa seemingly understood Dorit's position and never asked for the dog to be returned to her or Vanderpump Dogs."

As both Lisa and John have mentioned, giving a Vanderpump Dogs dog to anyone other than Vanderpump Dogs is punishable by a $5,000 fine. Dorit admittedly signed the adoption contract, which contained this clause, without really reading the fine print. 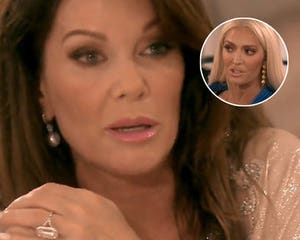 On Tuesday night's "On the Rocks" radio show, John said he was asked by both Lisa and Ken Todd -- friends of the Kemsleys for years -- to forgo their policy because of Dorit's status on the show and their relationship with her. John claims he had a big argument with Ken, "because he's saying, 'Protect my friend.' And I said, 'F--k you. I'm not protecting your friends; I'm protecting the foundation. I don't have loyalty to Dorit; I have loyalty to my foundation, and I have loyalty to my dogs.'"

"This is what upsets me. Everyone thinks Lisa planted this," John said. "This is reality [TV] meeting real world. I got the location agreement on Wednesday. This happened on a Sunday, and we had to film on the following Thursday. So Lisa is in the middle, trying to open TomTom, trying to open the Vegas location that they're doing. And so literally that Monday, she got on a plane to go to Vegas while I'm screaming at her ... I even have the text message from Lisa -- and again, no one know this -- Lisa said, 'Shut this down,' at 9:45, and we were filming at 10. And honestly, I'm not going to because how am I supposed to be an executive director, doctor of international business for a foundation that is international -- we're in six countries -- and I'm supposed to say, 'Oh, when something bad happens and it involves a celebrity, we just push that under the rug.' It doesn't work that way."

"You guys have to understand that PK and Dorit are Lisa and Ken's longtime friends, and Lisa always -- which, Lisa and I have multiple arguments about, I'll admit that -- we always fight about her defending Dorit because Dorit has done several things. She's not only done things to me, but she's done things to Lisa, who I care about, and now she's done something to a dog that I hand-reared," John continued. "So I go over to Lisa and Ken's, and they're having family dinner with two friends. And I have to admit, I'm spitting blood. And I have to say, Lisa was very torn. She was torn between her friends, and she was torn between me. I'm the mentor to all these young, budding philanthropists, saying, 'We have to be so strict with these things.' So how am I going to take my responsibility down and say, 'No, it's Dorit from Real Housewives, so we have to ignore all of our procedures.'"

"So now I'm getting called out by everybody," he added. "And I don't appreciate Lisa Rinna saying, 'She should quell her boys.' I'm a 40-year-old man who has his doctorate in international business, and I'm not her employee." 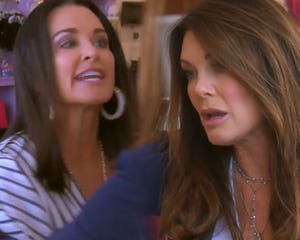 During the season premiere, we learned that one of Vanderpump's employees -- John Blizzard, who happens to be friends with Teddi -- told her her what had happened with Dorit's dog, Lucy Lucy Apple Juice. That part wasn't filmed, but what was filmed was John Sessa bringing Lucy out in front of Kyle, Teddi and Bravo cameras. "Does this dog look familiar?" he asked. He knew what he was doing, but he maintains it was not at the direction of Vanderpump.

On Tuesday's episode, Rinna told Kyle and Teddi that she felt Vanderpump actually orchestrated the whole thing. "She just set you all up," claimed Lisa R. "She doesn't want to get her hands dirty! If she had just gone to Dorit and said, 'Why did you give the dog back? I'm not over this.' Now, it's messy. Now, everybody's involved. This is like f--king high school shit."

Rinna later hurled her theory at Vanderpump herself, shouting, "He's your employee. This wouldn't get out there if you didn't want it out there. This is bullshit going to Teddi, bringing Kyle in. This sounds like a f--king setup." 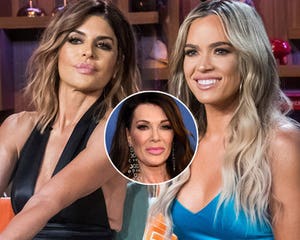 The preview for next week's episode shows Vanderpump printing out text messages Teddi supposedly exchanged with John Blizzard. Immediately after that aired, Teddi tweeted, "I hope next week Ken doesn't leave out the part in those messages that confirms Lisa set this up. Neat thing about texts is I can print them out as well." A source close to the situation later told TooFab they have "seen text messages that seem to contradict John's claims."

I hope next week Ken doesn't leave out the part in those messages that confirms Lisa set this up... neat thing about texts is I can print them out as well. #RHOBH

Teddi also wrote in her Tuesday night blog, "My intuition was already telling me that something was off when LVP was pretending that she didn't want the Lucy info out there but had John Blizzard tell me before coming to Vanderpump Dogs. And now talking with Rinna and Kyle here, I know I have been used as a pawn to get the story about Dorit and the dog out there while LVP can pretend like she had Dorit's best interests."

She said a lot more, but that was the general gist.

In regard to Teddi, John said, "Contrary to what Teddi has said in her blogs and everything that she's doing right now, she's saying that Lisa had planned that all of this would go down at the rescue center on the first day of filming. But that's not true, [according to] the timeline. And I have emails. If you want receipts, Lisa Rinna, I can give you some receipts."

"Here's something else that no one else knows: This is the second dog that Dorit had returned to us, or rather, given up," John said. "She adopted a 3-to-4-year-old beautiful Yorkshire Terrier. So Dorit adopted the dog. She loved the dog, Madison. And a week later, two weeks later, she says, 'I'm sorry, it's just not gonna work out with the family. The dog is biting my family.' Similar to what she said the second time around. I'm not sure what happened. I did see there was a photo with bite marks on PK's nose. So the first dog, we take back."

"I have an amazing adoption coordinator, Hannah Bortz, who, honestly, dogs are her life. She does the pre-check, she does a final check and she reached out to Dorit -- again, no one knows this -- two times via text message: 'Please let me know how the dog is. Please let me know what's going on with the dog.' No response," John continued. "So then I'm trying to be the mentor and the figure to these young kids who basically work for free. I mean, it's a nonprofit. So I'm saying, 'We have this protocol.' And I'm a stickler. We have an adoption pre-process, we have the home check, we have an after process, we have the adoption contract. So I have Hannah over here, who trained the first dog. I hand-reared the second dog from a nursery at my house because I'm like, let's not give Dorit a rescue dog. Let's give Dorit a dog that I have hand-reared that's never had any issues."

John explained that he has an agreement with certain shelters that allows him to take their pregnant females to his home, where he can oversee the whelping process. He said Lucy, Dorit's second dog, was one of the pups he hand-reared until she was 8 weeks old.

"This is a dog that was born in my house, bottle-fed by me," he said. "And then Hannah spent three weeks training Dorit on how to take care of the dog. We took the dog back for spade and neutering. We never do any of this, just so you know. So then Hannah's reaching out, trying to find out what's going on with the dog, and Lisa finds out. Sunday I get a message from -- I won't say the shelter name -- but a kill shelter in Orange County that said they have one of my dogs."

John said when the shelter contacted Vanderpump Dogs' info line, they didn't use Dorit's name. They simply said a "reality celebrity" had brought in a Vanderpump Dogs pup. When he found out it was Dorit, he was fuming -- and still is.

Rinna has not yet returned TooFab's request for comment, and Kyle's rep told us she has "no additional comment" on the matter.

This story is far from over. The dog drama will continue on next week's episode of "The Real Housewives of Beverly Hills." 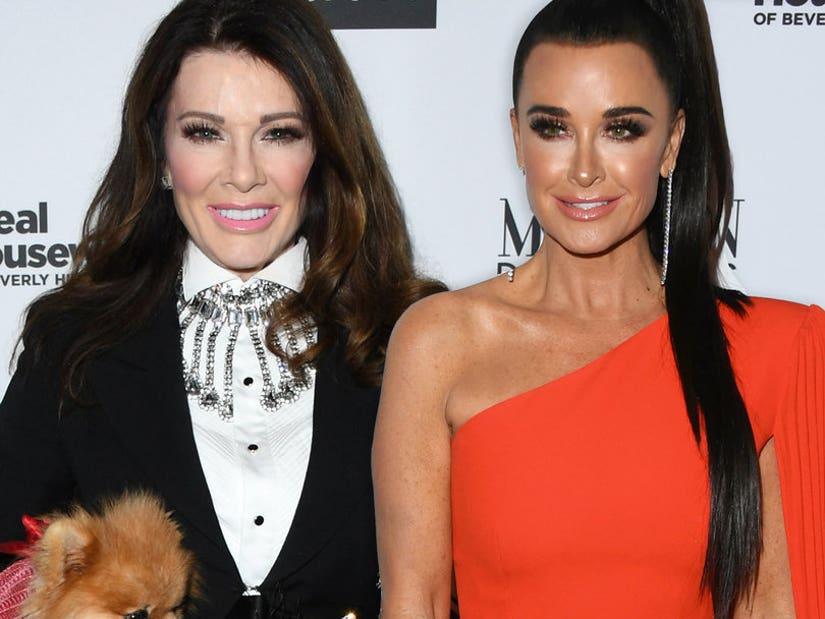