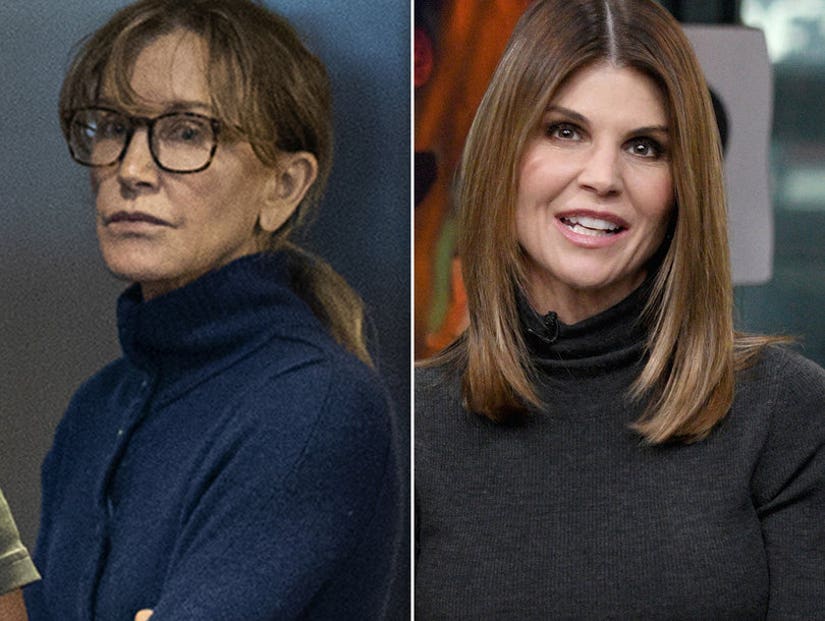 Many celebs poked fun, but just as many called them out for allegedly using their privilege to cheat.

UPDATE at 6:45am PT on March 14, 2019: As new details continue to be revealed, Huffman, Loughlin and everyone else involved in this scandal continue to get lambasted by celebrity critics all over social media. Below are even more reactions posted by a variety of stars over the past 24 hours, since our last update.

Chrissy Teigen mocked the situation by doing some Photoshopping herself (or at least having someone else do it -- poorly -- for her).

Kyle Richards commended her daughter Sophia for hitting back at trolls asking, "Did your parents bribe and buy your way into Gw just like all your neighbors back home did? You do seem incredibly stupid." Sophia's response: "I actually graduated high school on the deans list and worked really hard to get into a good school thank u for ur concern tho sweetie." Re-sharing the post on her own stories, Kyle added, "Yesss Sophia ... some people are really unbelievable. So proud of you." 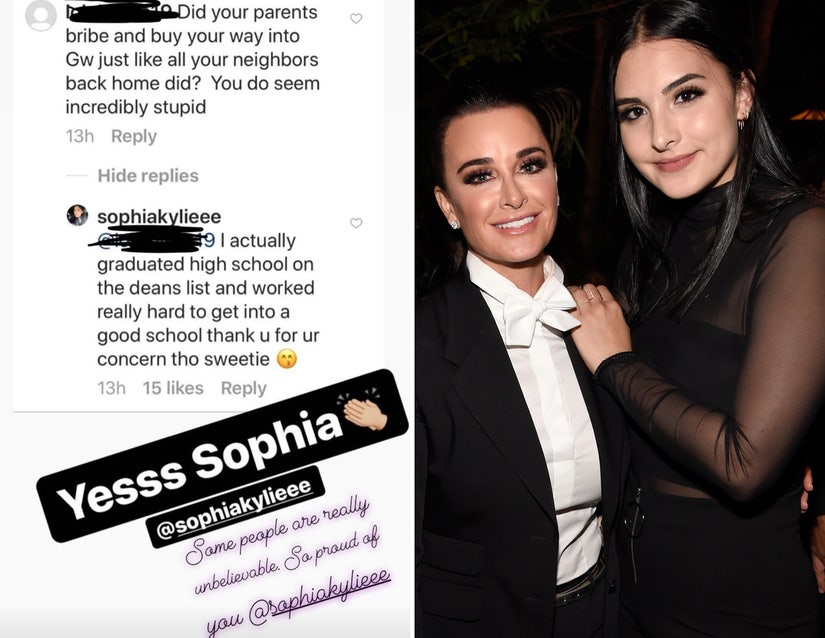 UPDATE at 6:45am PT on March 13, 2019: The reactions just keep coming as this scandal continues to dominate the news cycle. Below are some more Twitter reactions from other stars -- and click here to see how late night tackled the situation.

"Varsity Blues" star James Van Der Beek poked fun at the FBI giving their operation the same name as the 1999 movie and how relevant one quote of his from the film would be in this scenario.

I went to NYU for 1 yr w/ a very small scholarship ($1500 per semester) and my dad paid the rest. I was shocked at all the rich kids whose parents “made them” go to college. Seriously- let someone who wants to learn go in your shitty kid's place.

The part of the college fraud thing that's most disturbing to me was paying someone else take to take SATs for their kid .. What does this message send? You are too stupid to get a high SAT score? Ugly

To Aunt Becky's husband who talked shit about ASU - The @McCainInstitute for International Leadership does incredible work w/ students in cooperation with ASU and I guarantee those students involved will go on to do great things in the world and didn't have to lie to get there...

But wait, how do the kids not know they got in on a crew scholarship? If you ask your kid to stand in front of a crew boat, aren't they curious? I'm just confused all around.

And....if you see a bethenny building and my kid in a classroom (which will not happen) then you know the deal. It's not some surreptitious scam.

Ps. I graduated from NYU, a very hard school to get into. It would not have mattered where I went. I just wanted to check the box like people I knew at the time. And it NEVER comes up in business where I went. Literally NEVER. People mortgaging houses for this process.

Can we move on now?

HOW THE FUCK DOES LORI LAUGHLIN HAVE ENOUGH MONEY TO BRIBE USC???

2019 is about us witnessing how privileged, unethical people get themselves out of more jail time and their children into elite universities.

Donald Trump Jr. also mocked the two actresses on Twitter, before getting dragged himself.

Within minutes of the admissions scam story breaking on Tuesday, Felicity Huffman, Lori Loughlin and — yes — "Aunt Becky" were among the top three trending topics on Twitter.

The actresses were among 50 suspects caught up in a nationwide college admissions cheating scam, allegedly paying a collective total of $25million to ensure spots for their offspring in elite schools.

Reaction was swift, with many celebs poking fun at the two actresses, but just as many calling them out for allegedly using their privilege to cheat. 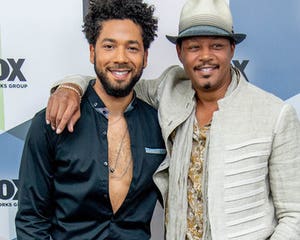 Billy Eichner was among the first to react with a Desperate Housewives gag, admitting: "TERI HATCHER GOT ME INTO BROWN", before following up with "JUDITH LIGHT GOT ME WAIT LISTED AT TUFTS, and a third: "Look, it's not the biggest problem in the world but I would not have gotten into Dartmouth without Mo'nique."

Arrow star Kirk Acevedo did not see the funny side: "No such thing as White Privilege? then how about, Rich White Privilege," he tweeted. "Teach your kids the benefits of hardwork, instead of raising them 2 believe cheating is the answer. Your payoffs only rob a more qualified kid out of a spot in that school OR scholarship for those in need!"

ESPN sportscaster Jemele Hill added, with Twitter tongue in cheek: "I, for one, STUNNED that rich people would pay millions in bribes to get their children into elite colleges. You mean they didn't earn it based off merit alone, as we're constantly told? ::clutches imaginary pearls::"

TERI HATCHER GOT ME INTO BROWN

No such thing as White Privilege?
then how about,
Rich White Privilege🤷🏻‍♂️
Teach your kids the benefits of hardwork, instead of raising them 2 believe cheating is the answer.
Your payoffs only rob a more qualified kid out of a spot in that school OR scholarship for those in need! https://t.co/p4FvxinrHV

Comedian Loni Love pointed out, somewhat accurately: "Ya spend $500,000 to cheat on SATs to get ya kids in USC? A tutor would have been cheaper and jail free...#auntbecky"

Fellow comedian Guy Branum was among the many drawing subtle — and incredulous — parallels into other federal investigations: "Finally we have the grounds we need to impeach Felicity Huffman."

Firefly star Jewel Staite joked, or maybe didn't: "Dibs on playing Felicity Huffman in the Lifetime movie about this mess."

Heathers star Brendan Scannell also joked, or maybe didn't: "Nobody paid to get their kid into Northwestern which tracks because when I got there I found out it was actually just every rich kid's safety school."

I'm learning some new ones as we speak. Stay tuned. https://t.co/ftJjYtMUxt

Undoubtedly the shadiest shade came from Rob Lowe, who retweeted a graduation picture with his son John, declaring: "Very proud of my honest, hardworking sons."

John himself was a little less subtle: "Still proud of this achievement. Happy for everyone out there who earned their accomplishments...and really sad for those who were never allowed the opportunity."

"I studied for MONTHS for the SAT. Twice, sometimes three times a week. Tons of practice tests. Ended up taking the SAT multiple times as well. College apps were no joke... the amount of stress kids put into that to potentially lose a spot to someone unfairly is horrible."

He added: "And let me say: I'm incredibly grateful that I had the privilege and opportunity to have a tutor and to afford practice test programs. A lot of kids don't. And to think of them losing their chance at their dream school to someone undeserving is really, really gross."

Even Donald Trump Jr, who helps run the Trump Organisation and whose dad is the President, mocked both actresses for using their privilege to help their kids.

Retweeting an old Lori tweet about "doing the right thing", he snarked: "Hollywood." He also re-shared an unfortunate old tweet of Felicity's asking for "the best hacks for back-to-school season", jibing: "I'm learning some new ones as we speak. Stay tuned."

OF COURSE Aunt Becky had to commit fraud to get her kids into college. We all know these two were going to grow up to be dumb as hell. pic.twitter.com/ln5n2pPLrl 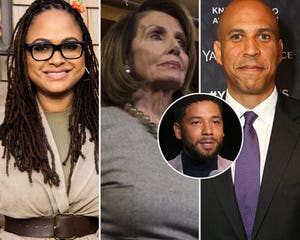