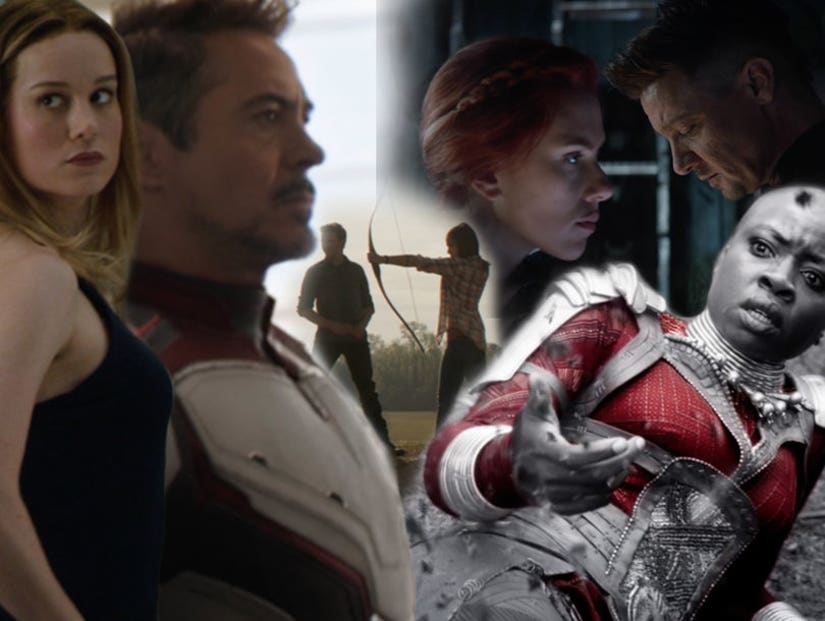 Here's why Danai Gurira and other moments began trending after the new trailer dropped.

UPDATE at 12:45pm PT: After Danai Gurira began trending over her name being left off the top of the "Endgame" poster, Marvel released an updated version, adding, "She should have been up there all this time."

She should have been up there all this time. Check out the official Marvel Studios' #AvengersEndgame poster. @DanaiGurira #WakandaForever pic.twitter.com/5V1veWMxlz

After half of our super-friends -- and the world with them -- were turned to dust with the snap of Thanos' fingers in "Infinity War," a new gang has formed. Its members: Captain America, Thor, Iron Man, Hulk (or at least Bruce Banner), Black Widow, Rocket, War Machine, Ant-Man, Hawkeye (as Ronin), Nebula and, yes, Brie Larson's Captain Marvel, making her Avengers debut. 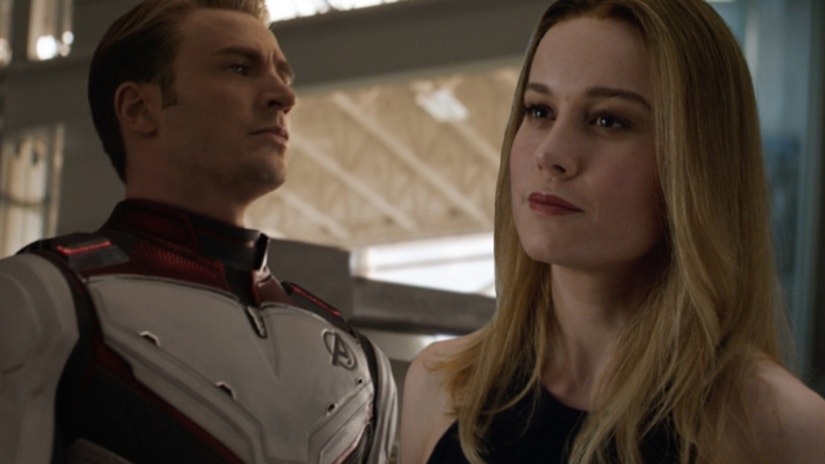 With the new footage comes plenty of new questions and surprises, both of which are blowing up Twitter in the new trailer's wake. Here's what everyone can't stop talking about.

Obviously, the big moment in this sneak peek is the interaction between Thor and Captain Marvel. Anyone who saw the latter's solo movie (in theaters now), know it (SPOILER ALERT) ends with a current day post-credits scene showing her answering Nick Fury's page.

After popping up at Avengers HQ, it's clear she makes a good impression on the God of Thunder, who says -- after grabbing his axe -- "I like this one." Imagine these two together? Yeah, Thanos is in serious trouble.

thor is so soft i've missed him so much i'm so happy seeing him smile again pic.twitter.com/uu4g9Lqjew

Thor making new friends is what I live for pic.twitter.com/9Ls8jWbdPM

when captain marvel and thor meet known damn well they are the strongest avengers pic.twitter.com/4G8AQIGVlD

Tony's Back on Earth

There really wasn't much question that Iron Man and Nebula would find their way back to Earth to join up with the rest of the gang, but this new trailer confirms it.

Previous sneak peeks showed them stranded in space, where Tony left dire voicemails for Pepper, but the footage here shows them all suited up at Avengers HQ. Phew. The big question now: will he survive the movie?

The Russo Brothers said that all promotional material for endgame will be from the first 20 minutes of the film. That means... Tony returns to earth in the first 20 minutes & the team is ready to leave IN THE FRIST 20 MINUTES! WHERE ARE THEY GOING SO EARLY #AvengersEndGame pic.twitter.com/kjL4bWQ8Yo

EVERYONE STOP TONY IS ON EARTH AND IS ALIVE AND BREATHING PLS STAY THAT WAY UNTIL THE END OF THE MOVIE #AvengersEndGame pic.twitter.com/POQK6l7okZ

TONY AND STEVE REUNION IS GOING TO END ME pic.twitter.com/mE21fOtz0O

If Steve, Tony and Thor don't get the happy endings they deserve #AvengersEndgamepic.twitter.com/0iqoOR0WrM

Speaking of Tony and Nebula, when we see them reunited with the other superheroes, they're all decked out in brand new, matching white suits.

The main theory online for these upgraded outfits: they're Quantum Realm suits with a color scheme similar to the one Hank Pym wore when he rescued Janet from the quantum realm. Why are they wearing them? Most guesses point to time travel, in a mission to prevent the snap from ever happening.

One other question: How did Scott get out of the quantum realm by himself?!

INTO THE QUANTUM REALM THEY GO #Avengers #Endgame pic.twitter.com/wX6atlb7I1

The Quantum Realm suits don't look so bad after all??? #AvengersEndgame pic.twitter.com/6Eb6mRQdaf

I wonder where the Avengers are headed? 🤔 #endgame #quantumrealm pic.twitter.com/6U1m8SauBP

The suits are Quantum Realm suits. Back in Ant-Man and The Wasp. Hank went looking for Janet in a suit similar to the ones seen in the trailer. The concept design even looks close to what the avengers were wearing. pic.twitter.com/nKWr3qlrd0

SCOTT GOT OUT OF THE QUANTUM REALM BY HIMSELF HE DOESN'T KNOW WHAT HAPPEN PLEASE I AM NOT READY TO SEE THIS pic.twitter.com/WKgHZcis5E

It wouldn't be an Avengers movie without a new hairdo for Scarlett Johansson's Black Widow, but she's not the only one rocking an updated look.

While Widow's hair goes from "Infinity War" blonde to red ombre in the footage, Jeremy Renner's Hawkeye also goes through a transformation. After being seen with his daughter -- more on her in a minute -- with a regular dad 'do, he's later spotted with a edgy mohawk. His makeover doesn't have great implications for his family, as many assume Clint Barton becomes his Ronin alter-ego after losing them in the snap.

"Half of humanity has vanished. Our friends and family are gone."

Y'all have been petty about Hawkeye for so long that I've gone all in on him just to spite you. Love the haircut, love the vibe, love the no superpowers, love it all.

Wow, Thanos snapped half of Hawkeye's hair too... #AvengersEndgame pic.twitter.com/mfz6JkjWzx

Hawkeye's family vanishes, so now he can get that cut he probably always wanted but wife said "hell naw"

I like how they're simultaneously trying to sell Hawkeye as a middle-aged farm dad AND give him the most fashion-forward hairstyle in the Avengers. pic.twitter.com/ube2yUTxaf

There's additional footage of Hawkeye that really riled up the internet this morning, as he's seen on his family's farm giving archery lessons to a young woman. While his daughter's name is Lila in the MCU, the name "Kate Bishop" began trending after the trailer dropped. In the comics, Kate is a young archer who comes under the mentorship of Clint, joining the Young Avengers alongside the offspring of other superheroes.

The current theories: Either this is Kate or Lila could be taking on Kate's storyline and, if that's the case, a cinematic version of the Young Avengers could be coming. While we have a feeling Clint's family won't survive the snap, chances are she (and everyone else who vanished) will be back.

THEY REALLY WENT THERE AND INTRODUCED KATE BISHOP #AvengersEndgame pic.twitter.com/diBYGF94GQ

Please don't be Kate Bishop, please!!!!!! Kate wasn't trained by Clint, she worked hard and made a name by herself, and only then Clint became her mentor and family pic.twitter.com/U4ANnPQLpr

the mcu is going to ruin kate bishop for me that what they are going to do... and i'm not okay about this pic.twitter.com/sJV257nhav

Don't think for a second that I didn't lose my shit over the shot of Clint teaching the young girl to shoot a bow. There's a 99% chance it's a flashback to his daughter, but the Kate Bishop implications are too great to ignore.

WE ARE GETTING KATE BISHOP IN THE MCU pic.twitter.com/cDfdwU1OLP

While Danai Gurira is featured on the new poster for "Endgame," she's the only pictured star whose name isn't above the marquee. She also doesn't appear in any new footage throughout the sneak peek and only pops up briefly in a black and white clip from "Infinity War."

After watching Black Panther disintegrate in front of her eyes, does she simply stay in Wakanda? That seems like a waste of her skills to us.

Here's how Twitter reacted to Danai being MIA from both the trailer and top billing on the poster:

OKOYE IN THE POSTER BUT NOT IN THE TRAILER? I THINK SOMEBODY'S TRYNA SET ME UP pic.twitter.com/dkvCrMbQ1k

okoye reacting to them not putting her in the trailer pic.twitter.com/nFuOvPZ0o8

How do they put okoye in the poster but not the trailer. What are the girls at marvel headquarters doing- pic.twitter.com/wbYLOflkyY

I'll ask again: HOW IS WAKANDA???? WHERE IS OKOYE? https://t.co/gORIg7IFDR

That billing does not bode well for my hope that Okoye gets her big moment as the sole survivor from the Wakandan power structure.

If Okoye was good enough for the poster then Danai should've got top billing with the rest. Period! It's nice to see the Marvel fandom defending her though. She's trending rn.

BLACK PANTHER star Danai Gurira is the only actor pictured whose name isn't billed at the top. Her image is larger than some actors who do get that billing. The only one from the franchise's best and most profitable movie, and yet? @MarvelStudios, this isn't difficult. Fix this. https://t.co/22miymysgj