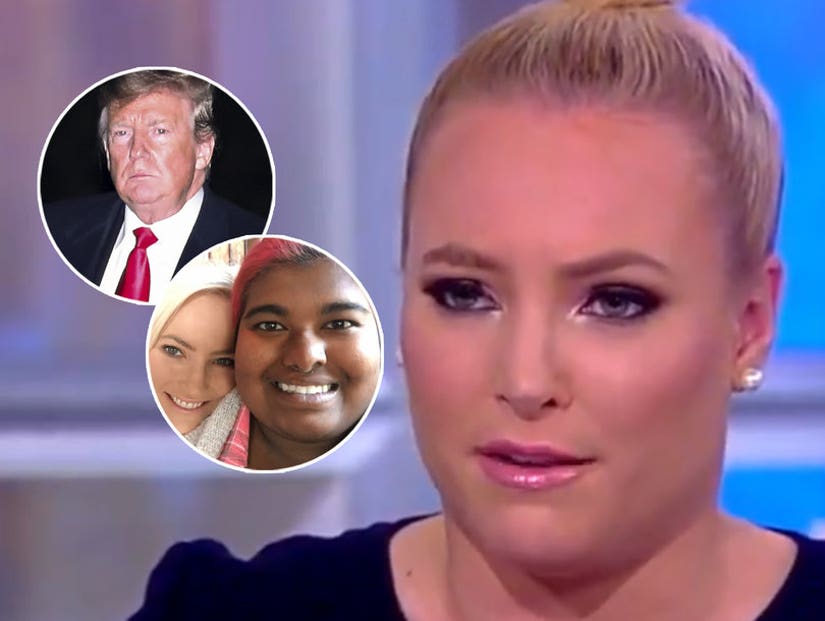 Meghan's sister speaks out "for the first time ever," before Ana Navarro unloads on POTUS.

For the third time this week, Meghan McCain was left defending her father's legacy on "The View," after continued attacks from President Donald Trump. This time, however, she let her younger sister Bridget -- who usually keeps an incredibly low profile -- do most of the talking.

The McCains once again had to hit back at POTUS after he said on Wednesday the late senator's family never thanked him for giving John "the kind of funeral that he wanted." By all accounts, Trump's limited role in the ceremonies included authorizing military transportation of McCain's body and respecting the family's wishes that he not show up. 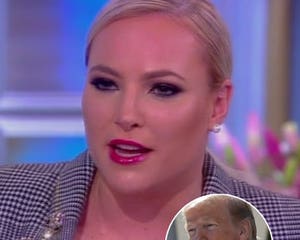 "It's extremely emotionally exhausting," Meghan said as the cohosts kicked off Thursday's show by talking about the latest comments. "I'm not the only child in my family, I have six brothers and sister and my little sister Bridget, for the first time ever, has decided that she wants to speak out."

Adding that Bridget is "very, very private," Meghan then read a pair of tweets her sister sent to Trump last night:

@realDonaldTrump Everyone doesn't have to agree with my dad or like him, but I do ask you to be decent and respectful. If you can't do those two things, be mindful. We only said goodbye to him almost 7 months ago. (1/2)

@realDonaldTrump Even if you were invited to my dad's funeral, you would have only wanted to be there for the credit and not for any condolences.
Unfortunately, you could not be counted on to be courteous, as you are a child in the most important role the world knows. (2/2)

"I think it's very brave of her," Meghan said of her sister, 27. "She's very young and she does not speak publicly. I don't expect decency and compassion form the Trump family. I do want to thank the American public for all their decency and compassion that they have given us. Do not feel sorry for my family."

She later added, "the one thing I'll say is my family is deep in grief, as any family would be losing your patriarch, but he made us strong for a reason, nothing breaks me, least of all this guy. Don't worry about us."

After applauding Meghan for taking "the high road," Ana Navarro went a different route, getting fired up as she unloaded on the president.

She then turned her sights on the Republican party for not doing nearly enough to push back against the attacks.

"The reason they're not speaking is because they're spineless and they're afraid of this man, because they think he's like Lord Voldemort and if they mention his name, he will come down and strike them dead politically," she said.

While she noted many Republicans were speaking out in favor of McCain this week, they came short of criticizing the president for not doing the same.

"Most of them -- with some notable exceptions -- have been too cowardly to call out the guy making the attacks," she continued. "They are enabling him. The silence and complicity of the Republican party is enabling Donald Trump cheapening the White House and the presidency."

Ana Navarro says Republicans are praising late Sen. John McCain amid Pres. Trump's attacks, but most "have been too damned cowardly to call out the guy making the attacks." https://t.co/BCFhdM6Nn0 pic.twitter.com/bEF2bU55KP

"Every time he talks about it we need to call it out," Navarro said, before turning to Meghan. "It's awkward for you, its painful for you, it might be exhausting, we can not get exhausted. We can not get tired of being outraged by what this man is doing to the presidency of the United States

Joy Behar also said she wished more people "would step up," before Meghan thanked everyone on the show for having her back. 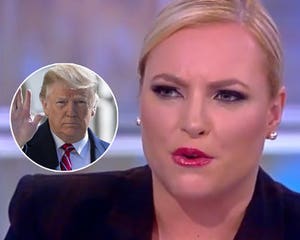