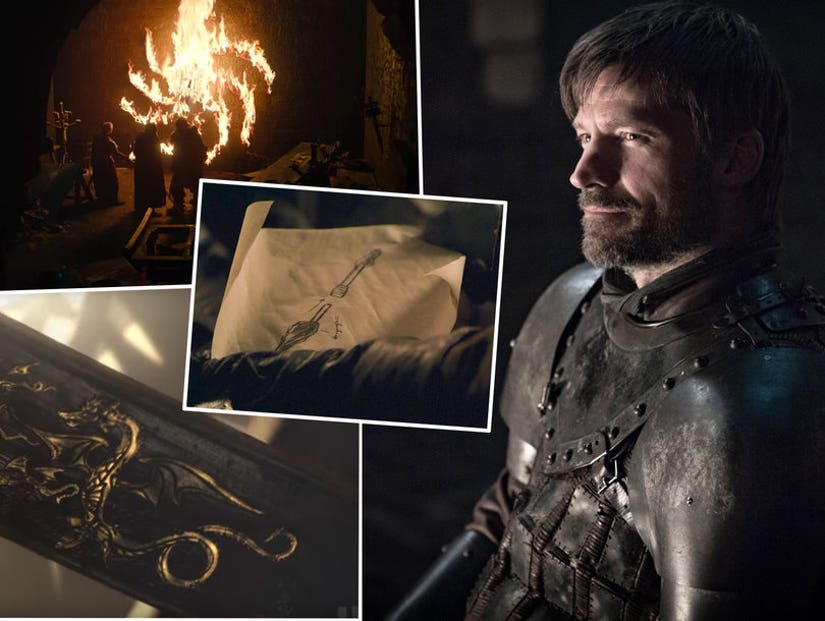 Wait ... did that little Umber kid ran so fast he caught fire?

The last ever season on "Game Of Thrones" finally arrived on Sunday night, bringing tearful reunions, violent deaths, burning children... and lots of unanswered questions. You know, the usual.

Episode 1 of Season 8 — "Winterfell" — served almost as a feature length "previously on 'Game Of Thrones'" segment for the characters themselves, setting up the pieces for what will be undoubtedly be a spectacular finale.

Hopefully we'll get some explanations along the way, for now, here are the 7 burning questions after the premiere! 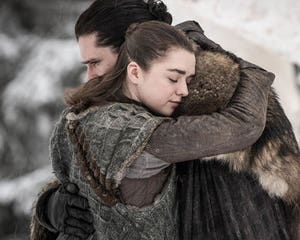 1 - What's up with that new opening title sequence?

The clockwork map to Ramin Djawadi's fantastic theme has consistently been the perfect opening for the HBO fantasy drama; and on Monday night fans were treated to a whole new look. As well as a far more detailed peek inside Winterfell and King's Landing, the murals carved into the astrolabe that represents the sun above the map had some interesting new additions.

Replacing the Doom of Valyria, Robert's Rebellion and the Baratheon ascent to the throne, are three new images, two of them fairly easily interpreted: The Night King's destruction of the Wall, and the Bolton and Lannister's massacre of the Starks and Tullys at the Red Wedding (Not sure how they hanged a headless direwolf, but there ya go).

The final image triggered some debate online, as it appeared to show four dragons. Will the dragons breed? Has anyone actually checked if Drogon and Rhaegal are both boys? Just because they're siblings, that never stopped anyone hooking up in GOT.

However most agree that the big dragon represents Dany herself, and the three smaller ones her children; the comet in the sky is the same one from season two, which would roughly confirm the timeline.

Also, can the credits give the Night King and wight-Viserion a little more respect? They knocked the wall down ALL THE WAY to the sea, not just that little gap.

2 - How fast is that little Umber kid?

As the seasons have progressed, geography, time and distance have become less and less, shall we say, based in the realm of physics. In the first episode, Robert Baratheon literally took months to get to Winterfell to ask Ned Stark to be his Hand. In the interest of moving the show along, nobody minds.

However Sunday night's episode may have seen a new speed record broken by little Ned Umber. After the wall came down, Sansa called all bannermen to Winterfell — including little Ned, who came all the way from the north-most stronghold outside The Gift, Last Hearth, which is TWICE the distance from Winterfell as it is from Eastwatch-By-The-Sea, where the Wall was breached.

So between the time the Wall came down and his freaky flaming pinwheel exit, Ned Umber somehow made it all the way to Winterfell and back to Last Hearth in the same time it took the dragon-riding Night King to cover a quarter the distance. Guess they are called white walkers for a reason. 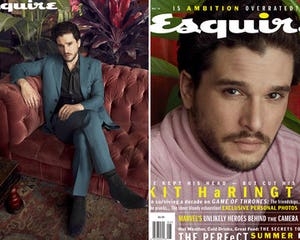 Why Kit Harington is Grieving Jon Snow, Details How Emilia Clarke Took His 'Breath Away'

3 - What the hell did Arya ask Gendry to forge?

Not satisfied with just Needle and her Valyrian steel dagger, Arya asks her best bud Gendry to make her yet another weapon. But what the hell was it?

From the brief glance at her drawing — which seemed to be enough for Gendry — it almost looked like a Dragonlass blowdart gun. Not a bad idea! Dragonglass probably a bit heavy to be blowing great distances though. Maybe Arya just invented the gun?

In all likelihood it's probably that spear Arya could be seen wielding in the trailer, which would allow her incorporate all that bo staff training she put in with the Waif at the House of Black and White.

4 - Is Tyrion REALLY that stupid?

Thank God Sansa asked the question were were all thinking. Tyrion IS the cleverest person in the show — so why would he believe Cersei suddenly started keeping her word? Does he really believe that? Or is he trying to stay relevant with the promise of a Lannister army still hanging?

Surely he knows how bad it will look when they don't turn up after he has vouched for her? Something is definitely fishy with Tyrion.

And speaking of Lannisters in Winterfell....

5 - How did Jamie waltz into Winterfell unmolested?

He was literally public enemy number one for seven seasons. He tried to kill Bran, attacked Ned, went to war with Rob, not to mention attempting to kill Daenerys.

Literally every person in the North has retreated to Winterfell on high alert to prepare it for the biggest fight it has ever seen... and Jaime Lannister saunters in on horseback, with merely a hood as his cunning disguise?

And speaking of sneaking into places...

He may have no penis — but he certainly has balls. Theon somehow manages to board Euron's flagship Silence, free his sister Yara, and escape with at least THREE of his uncle's ships? This is how the Gold Company prove to Cersei how great they are, by having their transport stolen from under their noses? And that's after already annoying her by turning up with zero elephants. Did none of the rest of Euron's fleet notice the flagship wandering off?

And come to think of it, if Cersei really wants the northerners to think she is on their side — shouldn't she have asked Euron to park the fleet that supposedly abandoned her somewhere less obvious?

7 - Did the show just confirm bad blood between Lena Headey and Jerome Flynn?

As legend goes, Lena and Jerome once dated, and the break-up was so bad that they refuse to film scenes with each other.

Cut to Sunday night's episode and Cersei has a task for Bronn... and sends Qyburn to tell him. There is absolutely no reason Cersei couldn't have done this herself. As a go-to distraction, there were three naked ladies in the scene, so nobody thought about it too much.

It adds the question whether Cersei actually did issue the order... could Qyburn have an ulterior motive for getting rid of them? Cersei certainly hates Tyrion, but could she really be as upset at Jaime, brother, lover, father of her late children? Will Bronn really betray two guys he genuinely admires? And wouldn't it make more sense / be cheaper for Cersei to simply let her brothers help fight the walker invasion, and probably get killed in the process? 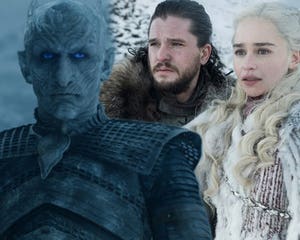