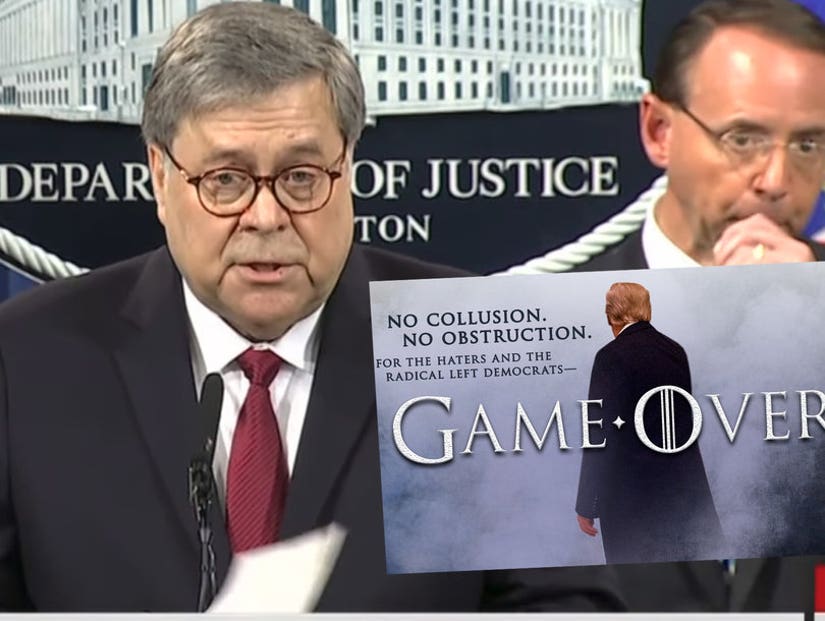 The Mueller Report supposedly indicates no collusion — but Americans clearly want to come to their own conclusions.

A redacted version of the report was released on Wednesday, but not before Attorney General William Barr gave his personal summation, a move which cause #BarrCoverUp to quickly trend on Twitter.

"The process is poisoned before the report is even released. Barr shouldn't be spinning the report at all, but it's doubly outrageous he's doing it before America is given a chance to read it. Barr doesn't want Americans to make up their own mind. What is he so afraid of?" she re-posted.

The president himself may have risked copyright when he used Game Of Thrones font to declare: Game Over.

"No collusion. No obstruction. For the haters and the radical left," he addressed his dramatic message.

Politicians on both sides of the aisle fired their opinions across social media; however John Walsh, who served as Attorney General under Barack Obama, reminded that Barr's position should be objective.

AG Barr has confirmed the staggering partisan effort by the Trump Admin to spin public's view of the #MuellerReport – complete with acknowledgment that the Trump team received a sneak preview. It's more urgent than ever that Special Counsel Mueller testify before Congress. https://t.co/waoGzLntlt

I had the honor of being appointed US Attorney by a President I deeply admired. But my colleagues and I always knew that our jobs were *not* political. Fed prosecutors are charged with following the law and the evidence. We should all keep that in mind today. #MuellerReport

"I had the honor of being appointed US Attorney by a President I deeply admired. But my colleagues and I always knew that our jobs were not political. Fed prosecutors are charged with following the law and the evidence. We should all keep that in mind today. #MuellerReport".

Even Fox News' own political analyst Chris Wallace admitted Barr was acting more like the President's personal attorney rather than the attorney of the American people: "The Attorney General seemed almost to be acting as the counselor for the defense, the counselor for the president, rather than the Attorney General, talking about his motives, his emotions... Really, as I say, making a case for the president."

Elsewhere on Twitter, people were poking fun where they could. Many couldn't help but notice that Deputy Attorney General Rod Rosenstein, who originally signed the probe's authorizing document, stood completely motionless behind Barr throughout the entire press conference, prompting some to surmise he had been taken hostage.

Gilbert Gottfried shared a clip of himself helping to narrate the audiobook version of the Mueller Report, screaming 'REDACTED!' in his trademark dulcet tones over the reading.

The purpose of the Mueller probe was to investigate Russian interference into US elections, and whether or not the Trump campaign colluded with them.

Robert Mueller delivered his report to Attorney General Barr last month, who summarized that the President, his team or indeed any other American did not assist the Russian effort, which involved the hacking and leaking of sensitive information.

If Loretta Lynch or Eric Holder ever held a press conference about Barack Obama or Hillary Clinton without releasing the accompanying report, as William Barr just did, Fox News & the entire Republican Party would have blown a gasket. This is corruption at its worst. #BarrCoverUp

- William Barr, after he generously conducted a propaganda conference for the President.#TrumpColluded #BarrCoverUp

He added: "While this report does not conclude that the President committed a crime, it also does not exonerate him."

On Thursday, a redacted copy of the report was released to the public. Attorney General Barr gave a press conference 90 minutes before the release rather than after it; many commentators pointed out how that was very unusual, and gave the appearance Barr was attempting to put a positive spin on the report before the public had a chance to read it.

He insisted once again the report found no evidence of collusion, adding that Trump fully co-operated. He said the President read the report first and was "well within his rights" to insist on further redaction, but did not in the "interest of full disclosure and transparency".

The 400-page report had four different types of color-coded redaction: grand jury information, sensitive intelligence about sources and methods, material about ongoing information (such as Republican activist Roger Stone, who has pleaded not guilty to lying to Congress) and material affecting peripheral third parties.

Is it just me or does Rod Rosenstein look like a POW made to appear in a propaganda video? #MuellerReport #BarrCoverUp pic.twitter.com/ajBWPam0Qv

Blink twice, Rod. The Seals are on the way. #MuellerReport pic.twitter.com/Ad8ELSIkOd

Expect to see a lot of Twitter lawyers on the TL today with ace analysis of the #MuellerReport pic.twitter.com/wSTa3deiTB