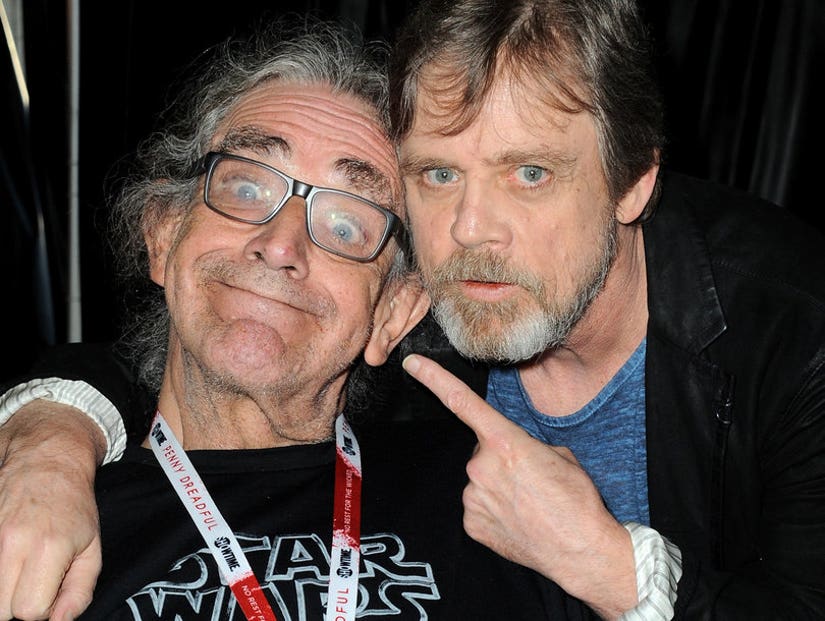 "Star Wars" actor Peter Mayhew, best known for playing Wookiee Chewbacca in the original trilogy, passed away this week at the age of 74.

His family confirmed the news on social media, saying he died at his North Texas home on Tuesday, surrounded by family.

"He put his heart and soul into the role of Chewbacca and it showed in every frame of the films from his knock kneed running, firing his bowcaster from the hip, his bright blue eyes, down to each subtle movement of his head and mouth," read the official announcement. "But, to him, the Star Wars family meant so much more to him than a role in a film."

"The relationships that began then grew into the friends and family that he would love for decades to come. As the films released and became more well-known he had his eyes opened to the possibilities of what he could achieve with his role in the Star Wars universe," the statement continued. "For more than 30 years Peter traveled all over the world spending time with his fans and friends. Peter developed lifelong friendships with the other cast members and his fans while on the convention circuit touching the lives of millions. As he realized over the years the impact he could have, he became heavily involved with the 501st legion, Wounded Warriors, Make-a-Wish, and other non-profit organizations."

The 7'2" actor appeared in the original trilogy, Episode III "Revenge of the Sith" and some of "The Force Awakens." He was also a consultant on "The Last Jedi," which saw his body double Joonas Suotamo fully take over the role.

He's survived by his wife Angie and their three children. According to his family, a memorial service for friends and family will be held on June 29th. A memorial for fans will be held in December 2019.

"Star Wars" creator George Lucas, who cast the towering Mayhew for the role that would become his legacy, said in a statement received by Deadline, "Peter was a wonderful man. He was the closest any human being could be to a Wookiee: big heart, gentle nature — and I learned to always let him win. He was a good friend, and I'm saddened by his passing."

Harrison Ford, who portrayed Mayhew's on-screen best friend in Han Solo, said in a statement received by Buzzfeed News, "Peter Mayhew was a kind and gentle man, possessed of great dignity and noble character. These aspects of his own personality, plus his wit and grace, he brought to Chewbacca. We were partners in film and friends in life for over 30 years and I loved him. He invested his soul in the character and brought great pleasure to the Star Wars audience."

Mark Hamill tweeted, "He was the gentlest of giants; a big man with an even bigger heart who never failed to make me smile and a loyal friend who I loved dearly. I'm grateful for the memories we shared and I'm a better man for just having known him."

Suatamo, who shared the role of Chewbacca with Mayhew in "The Force Awakens" before taking it over entirely, called him a "dear friend and mentor," writing, "Peter's warm welcome when I came aboard as his double in 'The Force Awakens' meant so much to me. ... He was an absolutely one-of-a-kind gentleman and a legend of unrivaled class and I will miss him."

"Since 1976, Peter's iconic portrayal of the loyal, lovable Chewbacca has been absolutely integral to the character's success, and to the Star Wars saga itself," said Lucasfilm president Kathleen Kennedy in a statement. "When I first met Peter during The Force Awakens, I was immediately impressed by his kind and gentle nature. Peter was brilliantly able to express his personality through his skillful use of gesture, posture and eyes. We all love Chewie, and have Peter to thank for that enduring memory."

Daniel Logan, who played the young Boba Fett in 2002's "Attack Of The Clones", tweeted "We have lost a beloved member of the Star Wars family. My heart is breaking. I am so grateful I knew Peter & could call him a friend. He was a mentor, a friend & a family member."

He added: "Peter is now one with the Force. Lovely man who loved all his fans. RIP my friend. We all love you! He was a lovely person. He will be missed."

Savage Garden frontman and mega Star Wars fan Darren Hayes wrote: "Oh, sweet Peter Mayhew. You were so kind and loving to all your fans. May The Force Be With You and your family. Always."

See some of the reactions to the sad news below.

He was the gentlest of giants-A big man with an even bigger heart who never failed to make me smile & a loyal friend who I loved dearly-I'm grateful for the memories we shared & I'm a better man for just having known him. Thanks Pete #RIPPeterMayhew #Heartbroken @TheWookieeRoars pic.twitter.com/8xbq9HEWF2

Much more than Chewie to me...My heart hurts…I will miss you my dear friend…thanks for the great memories! #RIPPeterMayhew #StarWars pic.twitter.com/0DfCo59zpG

RIP Peter Mayhew. To create a beloved character with warmth and humor is a testament to any actor's spirit. To do it under a half ton of yak hair takes a true legend. ❤️❤️

The @WaltDisneyCo mourns the loss of our beloved #chewbacca portrayer, #PeterMayhew. Peter was larger than life in so many ways...a gentle giant playing a gentle giant. Rest in peace.

Peter Mayhew created one of the greatest film characters of all time. Chewbacca was funny, courageous, and caring. He did it all without the benefit of speech, just that vocal growly cry that 1 in 100 fans can do real well when they're drunk. He was always really nice to me.#RIP

Sad to hear of Peter Mayhew's passing. So long, Chewie, may the force be with you.

We have lost a beloved member of the Star Wars family. My heart is breaking. I am so grateful I knew Peter & could call him a friend. He was a mentor, a friend & a family member. Peter is now one with the Force. Lovely man who loved all his fans. RIP my friend. We all love you! https://t.co/YkWD23Vogw

Oh, sweet Peter Mayhew. You were so kind and loving to all your fans. May The Force Be With You and your family. Always.

What a terrible loss. Best known for playing Chewbacca in Star Wars, Peter Mayhew was one of the kindest people in any fandom. Rest in peace, Mr. Mayhew, and thank you for all of the memories.https://t.co/Twr8gNGRRj

I hope these 2 are having an amazing catch-up. RIP Peter Mayhew. ❤️ pic.twitter.com/s6zKIZ3dh9

The night before The Force Awakens panel at Star Wars Celebration 2015, I was at a dinner with the cast and sat next to Peter Mayhew.

He was a lovely man who told wonderful stories about his giant friendship with tiny Kenny Baker.

Chewbacca's warmth did not come from the fur. https://t.co/hl76zHPgNs