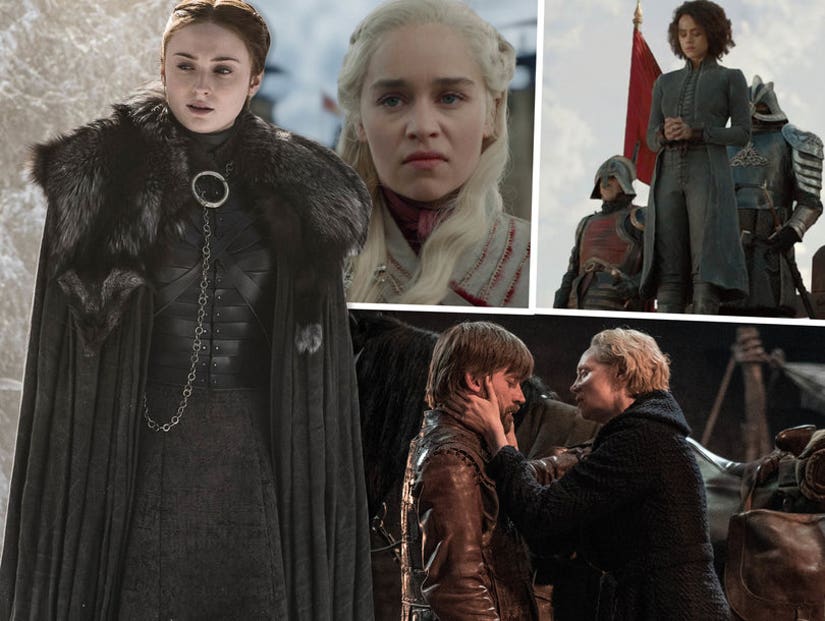 We say RIP to a dragon and Dany's closest confidants ... while everyone freaks out over a latte.

The battle for the Iron Throne made its way to King's Landing on Sunday night's "Game of Thrones," where a few last-minute shockers set the stage for an all-out battle between Dany and Cersei's armies.

The 80-minute episode began with the fallout from the Battle of Winterfell, with the survivors all saying goodbye to those lost in the fight against the Night King. What followed was a series of celebratory moments, as everyone in the North plotted their next moves to gain control of the Seven Kingdoms ... and got busy.

The latest installment also set off a lot of online outrage, especially regarding the show's ongoing treatment of its female characters and people of color.

Keep reading to see what really popped on social media during and after the episode aired.

Outrage Over Writing for Women and PoC

There were a number of moments from Sunday's episode that sparked major criticism of the show's writers, creators David Benioff and Dan Weiss.

The first scene to get major backlash was Sansa telling The Hound that the rape and torture she endured from Ramsay Bolton only made her stronger, once again playing into a trope the show has struggled with for some time.

The episode was also criticized for putting one of the few women of color, Nathalie Emmanuel's Missandei, back in chains and using her death as a plot device for Dany... and for making Brienne, one of the series' strongest characters, cry over Jaime Lannister.

Game of Thrones's decision to put a freed slave back in chains and then murdered merely to show, once again, that the bad character is bad is unconscionable

David Benioff and D.B. Weiss writing the storylines for female characters on Game of Thrones pic.twitter.com/ebuKzFvd8f

Even as someone who likes #GameofThrones in general, I can't help but think about how much better this show would have been if they'd had more women, poc, and woc writing and directing it. Just, every part of it would have been improved.

Remember when Sansa was like "you know, it actually was a good thing I got raped and otherwise assaulted and abused all those times, bc now I am a Strong Woman." Interesting. #GameofThrones pic.twitter.com/Xd6klW0dKN

turning daenerys the mad queen because everyone betrayed her, making her look like a fool and weak, killing her dragons... in this essay i will explain why men can't write female characters

Things I can suspend disbelief for in #GameofThrones :
Dragons
Zombies
Bran's entire plotline

Things I cannot suspend disbelief for in #got:
Brienne of Tarth crying over Jamie Lannister. GTFOH.

as happy as i am with sansa's development throughout this series, i do have a problem with the way the writers keep pushing the narrative that a character has to go through something like rape and abuse to grow and develop.

As Dany inches closer to the throne, she also seems to be inching closer to her own father's fate as the "Mad King." After Missandei's murder at the hands of Cersei, she seems driven toward rage more than ever and it could be her undoing.

This latest development is a divisive one among fans, as some want to see her burn King's Landing to the ground after what happened to her right hand woman, dragon Rhaegal and both the Dothraki and Unsullied armies ... while others don't think it fits with how the character has evolved over the previous seasons.

Daenerys is about to become the mad Queen for real, for real #GameofThrones pic.twitter.com/DEzKV8FxRZ

I do not like this version of her. #ThatIsAll #GoT

Ummm the GOT writers trying to make Dany a mad queen makes no fucking sense when for the last 7 seasons she's never demonstrated anything of that sort. How else would you react if two of your children got killed and you best friend. Me as a queen: BURN IT ALL DOWN. pic.twitter.com/F6T2sDU0Pp

if they really gonna make dany the mad queen y'all know imma stan this woman until the very day i die. mad queen indeed. dracarys, bitches. we burning it all down, imma show up to the red keep like pic.twitter.com/8M9SFPflO6

I have been a Dany stan since day 1, and I'll be damned if I let anyone change my heart now. Not Cersei, not all the sneaky men on the show, and definitely not this moment. #Dracarys

anyway after tonight's bullshit dany still deserves the throne and the GoT writers are just shit pic.twitter.com/F9InUB8zqD

turning daenerys the mad queen because everyone betrayed her, making her look like a fool and weak, killing her dragons... in this essay i will explain why men can't write female characters

She's lost everyone.🙏🏼
Viserys Targaryen.
Khal Drogo.
Her unborn child.
Ser Barristan Selmy.
Viserion.
Most of her Dothraki.
Most of her Unsullied.
Jorah Mormont.
Rhaegal.
Missandei.
now Jon and her claim to the throne.
The Mad Queen has finally awoken.#GameofThrones pic.twitter.com/2O8ta7BjJG

#GameofThrones
Drogon and Dany pulling up on Kings Landing after the death's of Missandei and Rhaegal pic.twitter.com/JipqUndvvS

Honestly. At this point ı'm all for mad queen #Daenerys amount of pain she suffered in the last episodes was just heartbreaking to see. I want her to destroy that filthy landing. #GameofThrones pic.twitter.com/4UK3fnf7dL

Sansa really doesn't want to see Dany sit upon the Iron Throne and is ready to spill whatever secrets necessary to prevent it from happening.

After both she and Arya promised Jon they wouldn't tell anyone about his true identity as Aegon Targaryen, she did just that. Not only was it a secret that her dad had no problem keeping for years, but one that, if it picks up steam, could make Jon the true ruler of King's Landing ... something he doesn't even want.

Sansa when Jon asked her to swear she would keep his secret #GameofThrones pic.twitter.com/hXgu7OtgGC

Sansa after she swears not to reveal Jon's secret #GameofThrones #DemThrones pic.twitter.com/n6GXb4PrVH

When your daughter cant keep a secret for 2 minutes that you kept for 18 years #GameofThrones #Sansa pic.twitter.com/RaSr6n9Qac

On a scale from Sansa Stark to Ned Stark, how good are you at keeping a secret?
🤣#GameofThrones #GOTS8E4 pic.twitter.com/bTOLNSTNt0

After surviving the Battle of Winterfell, Jon's direwolf, Ghost, was sent off to the North to live with Tormund and the rest of the wildlings. He believes it's where his pooch -- now rocking a torn ear -- truly belongs.

Ghost hearing he has to go North because the CGI budget deported him#GameofThrones #DemThrones pic.twitter.com/wj1JDyBx90

y'all mad at Cersei but Jon didn't even tell Ghost he was a good boy before he left. let's focus on the REAL issues.

Jon to Tormund: Ghost belongs with you in the north#gameofthrones pic.twitter.com/HaUMqD5Tsu

This is the proper way to say goodbye to your faithful wolf! #YouKnowNothingJonSnow pic.twitter.com/o9jB5v8Ps3

ghost fought for the north, was always on jon's side, was loyal to him his whole life and jon just decided that ghost is better off some place else... the way he put his head down when jon was leaving him behind, PLEASE, let me protect him pic.twitter.com/eH2Iil3waN

Ghost lost a ear in the battle and Jon couldn't even pet him goodbye, wtf is that?! #gameofthrones pic.twitter.com/dC3CmLTIGf

We will all say what Jon couldn't:
You're a good boy Ghost 🐺#GameofThrones pic.twitter.com/bUlEOdZjDt

#DemThrones #Gameofthrones #GameofThrones8x04
Ghost coming back to Jon after he finds out Rhaegal died pic.twitter.com/GPtYY8dsHq

In one of the show's lighter moments, Dany named Gendry a true Baratheon and made him Lord of Storm's End. While this move was more in her best interest's than anything else, it gave Gendry the courage to ask for Arya's hand in marriage.

She, however, turned him down and said she'd never be a "Lady." Speaking to The Hound, she later made it clear she's heading to King's Landing with no intention of ever returning.

gendry in next episode when he goes after arya to make sure nothing bad happens to her pic.twitter.com/96hDYuq3j0

Arya, rejecting Gendry's proposal: “You'll be a wonderful lord. And any lady would be lucky to have you. But I'm not a lady. I never have been. That's not me.”

Arya when Gendry asked her to be Lady of Storm's End #GameOfThrones pic.twitter.com/cE1kjh9NkD

However you feel about Brienne of Tarth losing her virginity to Jaime Lannister, that was made all the more messy when he decided to bail on Winterfell and what could have been a good relationship to return to Cersei in King's Landing.

Did he break Brienne's heart to keep her from following him? Does he truly still have feelings for his sister ... or does he have something else (i.e., her murder) in mind? We'll see.

but how fucked up is it that poor brienne lost her v card to jamie and he went back to his toxic ex?? turns out even knights fall victim to fuck boys ://

Jamie literally took Brienne's virginity, made her fall head over heels, and then told her that he'll always be more in love with his sister. The level of fuccboi! #GameofThrones

#GameofThrones #DemThrones Brienne of Tarth: You really gonna just hit it and go back to your sister?

Grey Worm, Arya, and Jaime all fighting over who gets to kill Cersei next week #GameofThrones pic.twitter.com/kgFYmpyLqg

Let's all agree that Jaime is going back to Cersei to kill her because he truly loves Brienne, k? K. pic.twitter.com/CvTMU64rAm

Will Euron Figure It Out?

Euron proved he's an excellent warrior for Cersei by taking out one of Dany's dragons ... but can he do simple mathematics?

Last night's episode showed Greyjoy being told he's going to be a father to a future king, something viewers know is not actually the case. While Euron thinks he knocked up Cersei, that baby is really Jaime's and Tyrion may have just blown her cover story.

Showing up at King's Landing, Cersei's brother tried to talk her out of fighting Dany by appealing to her maternal side. "You've always loved your children more than yourself," he said. "I beg you if not for yourself then for your child. Your reign is over, but that doesn't mean your life has to end. It doesn't mean your baby has to die."

Considering Tyrion hasn't been around King's Landing for a bit of time, he shouldn't know she's expecting ... unless the pregnancy happened a while ago. Think Euron will pick up on this?

Euron when Cersei's baby is born in two months pic.twitter.com/UF8XNQOnsf

Rare image of Euron trying to calculate how Tyrion knows Cersei's pregnant when he's just started sleeping with her pic.twitter.com/cA0kXV5m8G

So we're all going to pretend that Euron Greyjoy didn't just figure out that Cersei's pregnancy isn't his? Tyrion pretty much outed her!

Although...Euron is a f**king idiot so guess not? 😒#Dracarys #GameofThrones pic.twitter.com/uv6on4RdqC

Last, but certainly not least, Starbucks was trending all night after a coffee cup showed up in a scene at Winterfell. Whoops!

my favorite show in the entire world forgot a STARBUCKS COFFEE CUP ON THE TABLE WHILE FILMING pic.twitter.com/60z3pOCfg9

If they bothered using lights they might have seen the Starbucks they left in the shot. https://t.co/5pUqFxzEla

You're telling me they had TWO YEARS to put together a decent show and they couldn't even spot the goddamn Starbucks cup in Winterfell??!?! #GameOfThrones pic.twitter.com/8opg7nyydv

OH MY GOD, the showrunners were literally in the same scene as the Starbucks cup. pic.twitter.com/TS7wNPUCDf

Daenerys Stormborn of House Targaryen, the First of Her Name, Queen of the Andals and the First Men, Protector of the Seven Kingdoms, the Mother of Dragons, the Khaleesi of the Great Grass Sea, the Unburnt, the Breaker of Chains, and Drinker of Pumpkin Spice pic.twitter.com/BOPdolRhXz