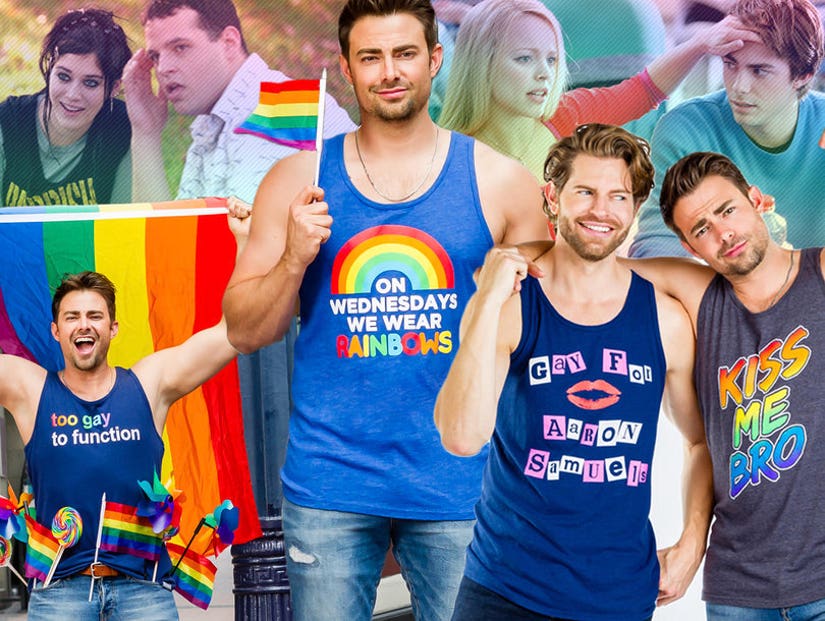 "Having pride to me means realizing you're never too much and you're always enough and being proud of that," Bennett tells TooFab.

Jonathan Bennett went from living in the closet during the release of "Mean Girls" to designing -- and proudly wearing -- a tank top embracing one of the movie's most iconic lines: "Too Gay to Function."

The actor partnered with Tipsy Elves this year for a new Pride collection, one with nods to the movie that made him a household name. One, written in Burn Book font, proclaims "Gay for Aaron Samuels." Another: "On Wednesday's We Wear Rainbows." And, yes, our favorite: "Get In Loser, We're Going to Pride."

Speaking with TooFab about the collaboration, Bennett opened up about his decision to wait until after the "Mean Girls" buzz died down to come out and why he's so proud to be part of that film's legacy, especially for its many LGBTQ fans. Read the full Q&A below.

A lot of actors who get recognized for one major role don't really lean into it. You've really embraced it with 'Mean Girls,' however. Between this line, the wine, your cookbook, the Ariana Grande video, why have you really gone all in?

You and Daniel Franzese have both talked about how you were advised to stay in the closet when 'Mean Girls' came out. Do you ever think about how your career would have changed if you had come out back then?

That is the question that no one ever knows the answer to. I think 2003 is a much different climate than 2019. And 2019 isn't a climate that's completely thumbs up, guns blazing, 'This is awesome.' The cities we live in, we feel like it's completely acceptable and normal because it is and then you'll go to other parts of the country in middle America and some of the smaller towns there. It's not OK still.

There comes a time in your life when you realize it just doesn't matter and it's not worth it to not just live completely open as yourself. And that's what happened for me. I never really talked about it when 'Mean Girls' came out, my friends all knew. I just was kind of told by not anyone specifically, but everyone [to stay closeted]. We lived in a weird world where us actors who were working in the public eye at the time that were gay, we all didn't know what to do. There was no like, 'How does this work?'

The manual wasn't there.

The manual wasn't there. So we were all figuring it out together. And you know it's definitely changed a lot. It's a better climate, but I don't know if it would have changed if I would have come out earlier. I want to stress this to everyone: I don't think people should be pressured into coming out just because they're celebrities or because they're actors or because they're in the public eye or even even because they're gay. If they're not ready, that's OK, that's their time and they can do it however they want and there's no rule that says you have to do it a certain way. It's everyone's own journey and they can do it how they want. For me, I was like, OK, it was time. I was like, 'Yep, I'm done. I'm over it.' I'm like, f--kin' don't cast me, I don't care.

What does Pride mean to you?

Having pride to me means realizing you're never too much and you're always enough and being proud of that.

Can you talk about how the collaboration with Tipsy Elves came about, just in time for Pride this year?

It was so funny. Last year on my birthday -- which is June 10, which is pride -- we were in Orlando and I was wearing one of the Tipsy Elves shirts that said Bromos. I just have loved Tipsy Elves for so long. I think if there's any clothing company that encapsulates me as who I am as a person, it's this brand because all their clothes are funny, a little obnoxious and really loud and bright. So I said to my boyfriend [TV host Jaymes Vaughan], I go, I should do a Tipsy Elves Pride line for next year and we should do like kind of like a spoof on all the things in my life and turn them into shirts. And, literally, I just reached out to the company and called them and I said I love your company I want to do this. And they were extremely receptive and they thought it was a perfect fit. So we launched it.

And a portion of the proceeds go to The Trevor Project , right?

Absolutely. 10 percent of the proceeds from all the shirts sold from the pride collection goes to help The Trevor Project, because while we want to celebrate Pride, we want to make sure we take care of those who need help in our community as well.

A lot of the shirts are obviously 'Mean Girls'-inspired. What went into the design process?

We just took all the different major themes from my life and kind of used that as a blueprint. We use everything from 'Mean Girls' to 'Cake Wars' to like the 'Kiss Me Bro' because it's just, I don't know, I think it's funny. Because the whole thing of me always making out with all the hot girls in all the movies for the past 15 years, I thought it would be fun to turn on its head. The 'I Take Pride In My Cakes' one I love because it's a double entendre with your butt and actual cake, so I thought it was really funny. We just wanted people to see the shirts and just have a good reaction to it and laugh.

You're also modeling them with your man. You guys look great together -- how was that photoshoot?

I'm sure for a lot of guys who watched 'Mean Girls,' Aaron Samuels was probably one of their first male crushes too.

100%. It was so much fun getting to shoot with my boyfriend. I have to say my boyfriend is the best Instagram boyfriend / real boyfriend / makes sure I always look good in photo shoots boyfriend. Whatever 'Dance Moms' are, Jaymes is like that times a million, but without the dancing. Make sure you say something nice about him in this interview, so I can show him! He is fantastic. He's so amazing.

Last question: Have there been any 'Mean Girls'-themed opportunities or partnerships you've turned down in the past?

I don't think I have my schedule to come and host a 'Mean Girls' prom at your high school, but thanks for the invitation.