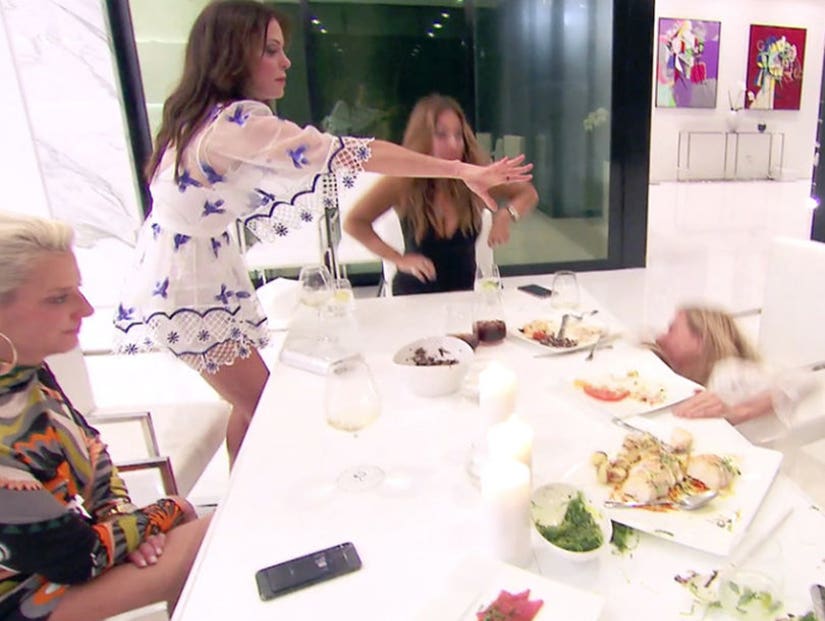 "You just hear horror stories: 'Oh, someone fell and then died in the middle of the night,'" Bethenny explains.

After Lady Morgan tried to pee in the bathtub, screamed about how everyone goes after her exes, fell over multiple times and told Bethenny Frankel she would "knock her out," she nodded off at dinner and smacked her face on the dining room table. 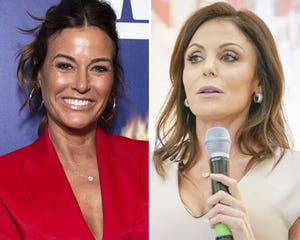 Bethenny, Dorinda Medley, Barbara Kavovit and Tinsley Mortimer immediately rushed over to pick up Sonja, who was still mumbling about how she wanted to knock out Bethenny. Once Bethenny was able to get her upright, Sonja began kissing her cheek.

Bethenny kept asking Sonja if she had hurt herself, but she was too far gone to answer properly. Barbara, however, insisted she saw Sonja hit her head, so Bethenny decided to call the paramedics.

"You just hear horror stories: 'Oh, someone fell and then died in the middle of the night,'" Bethenny explained. "So I want the paramedics here because I need to know with 100 percent absolute certainty that Sonja is okay."

"I just wanna kiss Bethenny!" Sonja half-shouted, half-mumbled as she kept getting up out of bed while the ladies waited for help to arrive.

"I know, I know, I know," Bethenny repeated like an annoyed mother. "Big night. It's a big night." She gave Sonja a kiss on the mouth.

When Ramona Singer walked in to see what was happening, Sonja scolded her for cramping her fun, then pulled up Bethenny's romper and shoved her head under the backside.

"Your ass is amazing!" she shouted as she kissed Bethenny's butt. "Oh, my God. It's an amazing ass!" she continued as she made slurping noises.

In walked Tinsley, totally dressed and ready to hit the town with Ramona, who looked to Bethenny to make sure she would be okay to handle Sonja on her own. Bethenny insisted she could handle it, so off Ramona and Sonja went.

"Get in, bitch!" Sonja yelled at Bethenny, holding the covers open. Bethenny crawled in, took Sonja's hair extensions out and cradled her head. 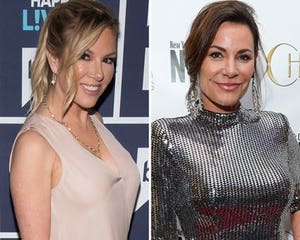 "How many fingers am I holding up?" Bethenny asked, holding up three fingers.

"Who is the president?" Bethenny asked.

In walked the paramedics, and Sonja's face lit up.

"Did somebody fall?" one of the guys asked.

"Oh, I fell!" Sonja announced proudly as she sat up in bed. The guys said they'd check her vitals.

"These guys are hot!" she loudly whispered to Bethenny, who agreed. "Can you check her, too?!" Sonja asked medics.

"That is not appropriate," Bethenny replied with embarrassment.

"Do you take any medications on a daily basis?" one of the guys asked Sonja.

"No, but I am allergic to dust mites," she replied. 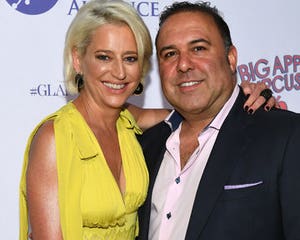 Later, Bethenny told cameras she was "very relieved to hear that Sonja's pupils don't appear to look like she's taking anything" and that she can't wait to "shove that straight up Luann's ass because it's a really horrible accusation." (Last week, Luann de Lesseps told everyone she felt Sonja was "on something" and possibly taking "pills.")

Luckily, Sonja was fine, but Luann was not. She was still fuming over all the things Sonja drunkenly shouted at her at dinner (that she was a "f--king diva" on a "high horse" who didn't think twice before marrying a man Sonja was once involved with).

"Barbara came and she told me the paramedics were there, and after everything that she said to me, I just can't look at Sonja right now. It was so hurtful, I just can't move," Lu said during a confessional. "After Sonja said some devastating things to me last night, nobody's checking on me to see how I'm doing. Is anybody checking on me? 'Are you okay, Lu?' Did I bring a bottle of vodka back to my room? Which God knows I wanted to."

The next day, Lu told Ramona everything that happened, saying, "I think they have a problem with my success, is the problem."

"Ohhh, I don't think so," Ramona replied awkwardly. "I think that they feel that your attitude to the group is that you have this aloof, condescending [attitude]."

But Luann maintained the others were jealous and that they didn't want to see her succeed in either her cabaret show or her sobriety. Ramona said numerous times that was all completely untrue.

Lu then said she felt Sonja was "spiraling into darkness" and that she wanted to invite her to an AA meeting. While Ramona didn't necessarily think Sonja needed AA, she did urge Lu to talk to Sonja directly. 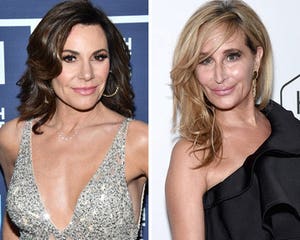 "I'm worried about you," Luann said to Sonja once the two got some alone time. "It's not normal that you faceplant at a dinner table. Do you understand?"

"Oh, really? You who fall in the bushes?" Sonja fired back, referencing the time Luann drunkenly fell into shrubbery during the ladies' trip to Mexico.

"Yes, but at least I own it! I know I have an issue with drinking," Luann replied.

Sonja maintained she "owned" all of her drunken mishaps and said she simply needed to "find a place of moderation" and "reign it in." She also didn't feel Luann's concerns were genuine.

"I don't think you're worried about me at all!" she said. "Why did you complain to the girls? Why didn't you just say to me, 'You know what, Sonja? I think you're a little manic and you're taking pills.' I don't need you saying that to people! If I went around saying that about you, you'd be in jail!"

The two eventually hashed things out, and Lu agreed to go straight to Sonja if she was ever "worried" again. Sonja was also gracious in receiving Lu's AA meeting invite but ultimately decided to stay back with the rest of the girls.

P.S. Next week looks bananas because Bethenny finally unloads on Lu at that outdoor dinner we saw in the Season 11 trailer. Get excited! 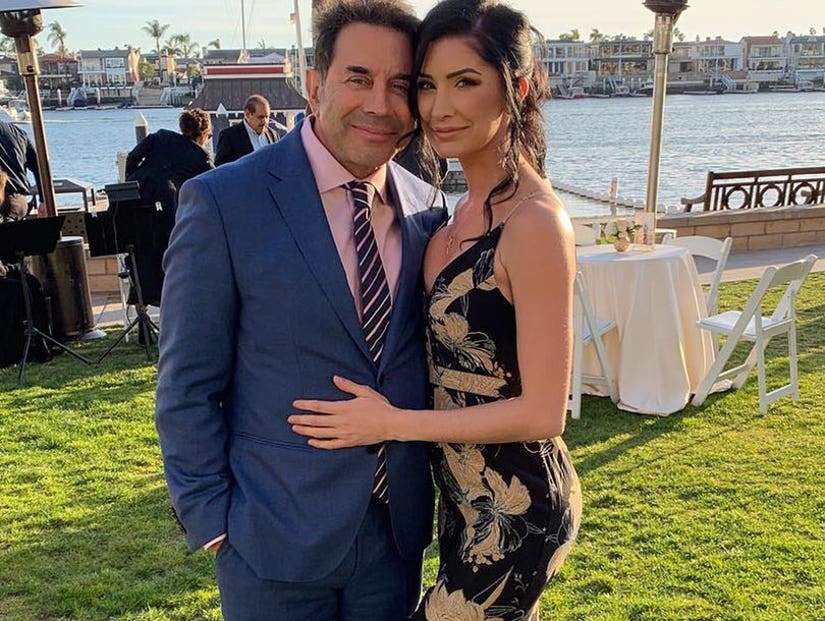