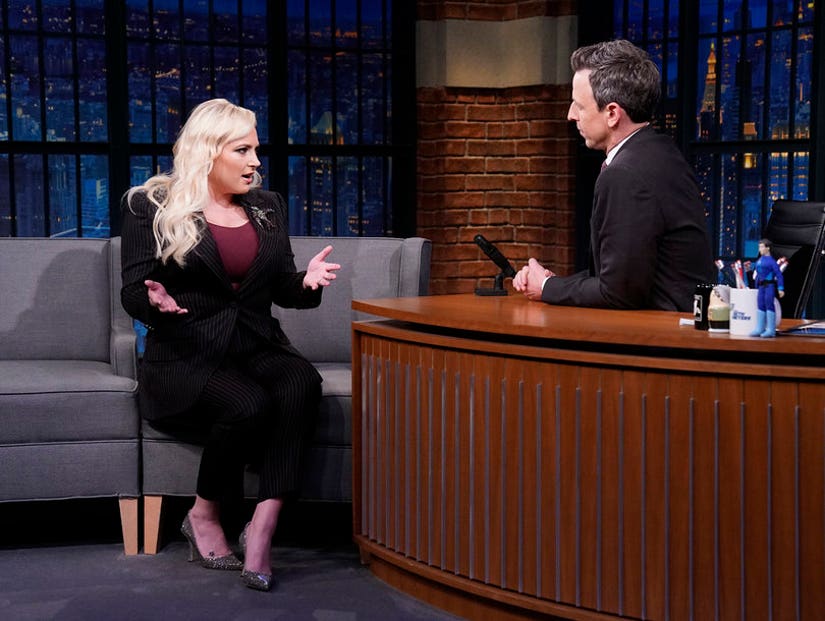 While her husband called Meyers an "untalented piece of shit," McCain says "I think [Seth] just wanted to lecture me."

It's been almost three months since Meghan McCain's uncomfortable interview on "Late Night with Seth Meyers," but thanks to a new interview with Elle, we finally know how she feels about the appearance and her husband's nasty tweets about the host after the show aired.

The "View" cohost was a guest on Seth's show back in May, where the conversation got heated when he suggested it was "dangerous" for McCain to repeatedly bring up and condemn comments Rep. Ilhan Omar made that were considered anti-Semitic, after Omar had already apologized for them.

Omar was previously criticized by House leaders for making "deeply offensive" comments while speaking out about the American Israel Public Affairs Committee's role in American politics. She later released a statement "unequivocally" apologizing, but McCain kept hitting at her, leading to an intense conversation between Meghan and Seth.

"I thought that it was going to be fun, and what you expect a late-night show to be. The way he talked to me can speak for itself," she told Elle. "But I'm not a snowflake, and I'm not precious. I can take it. I want to be heard, and I don't want to be a person who's brought on to be virtue-signaled to about the things we disagree on."

Following her appearance, McCain's husband and conservative commentator Ben Domenech unloaded on social media in a series of since-deleted tweets.

"I see that @sethmeyers, the untalented piece of shit who only has his job because he regularly gargled Lorne Michaels' balls, went after my wife tonight with his idiotic anti-Semitic bullshit," he wrote. "Seth is an awful person who is known within the industry for how terrible he is," he continued. "He is a monumental asshole who is utterly unfunny. He deserves the mockery he receives from all the people who laugh at him."

He added, "Here is proof that white men get ahead despite their obvious lack of talent: it's @sethmeyers, who would beg for a third of the viewers at @TheView. He's awful, untalented, and a perfect definition of a cuck." While those tweets have since been removed, he followed them up with one apologizing for "rage tweeting" in the first place.

I love my wife. I apologize for rage tweeting about how Seth Meyers treated her. I don't like him, I think he's a hack, but I shouldn't have done that. I'm sorry to anyone I offended.

When asked how she felt about his messages, McCain ignored her publicist's ask that they move past the subject and explained she was "asleep when he tweeted."

"I don't think it's productive to ever go on tweet storms about people. But we love each other very much, and a lot of times it does feel like ... I understand it's very jarring to be confronted by a woman like me who represents so many of the things that [people] don't like and agree with," she continued. "And the problem is, there's only one of me! I don't like that we're all living in such a vacuum. And not to totally abuse an old adage, but it really is why Trump won."

Speaking of Meyers, she added, "I don't know if he could have gotten away with speaking to a liberal woman the way he spoke to me. I don't think he wanted to have a conversation; I think he just wanted to lecture me. But I can't get myself into a place where I'm like, 'Woe is me.' It's not fair for me to feel bad for myself."

She then told the reporter she'd be "curious" to see what Meyers thought about their exchange. Via e-mail, he told Elle, "I'm grateful Meghan made time to come on the show. While we may have disagreed on some things, I certainly appreciated having an important conversation." 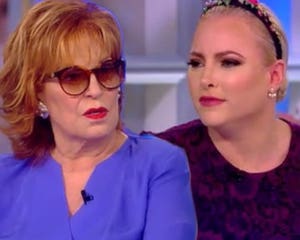 McCain also addressed some of her on-air spats with her "View" cohosts, saying any reports of catfights between the women are -- "most of the time" -- "complete bullshit." She did add, however, "sometimes there's some truth to it."

She admitted she does "get frustrated when I feel shut down," and went on to reveal the one comment she made on the show that she still really regrets: "I hate Hillary Clinton."

Of the 2018 comment she told Elle, "I apologized on TV and said that I was contributing to the polarization of this country. I really regret saying that. She was friends with my dad. It's really not fair."