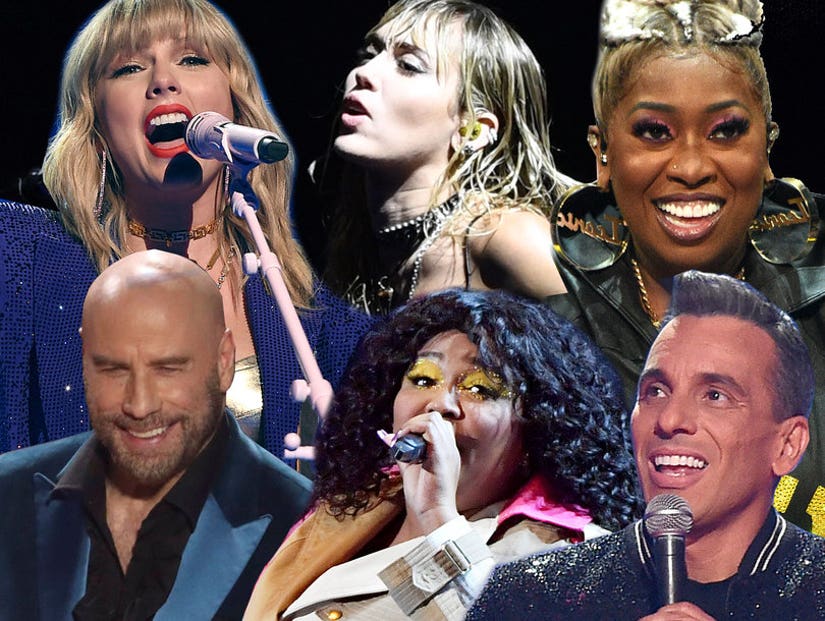 Check out the show highlights, low points and everything in between from the VMAs.

The event included performances from Taylor Swift, the Jonas Brothers, Camila Cabello & Shawn Mendes, Lizzo, Miley Cyrus and Lil Nas X, while Missy Elliott was presented with the Video Vanguard Award. TooFab kept track of every moment that went viral on Twitter throughout the night, sparking praise, shock and more than a few memes on social media. 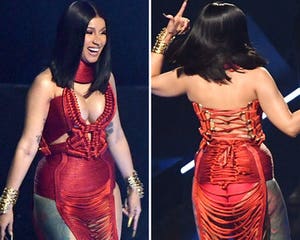 Taylor Swift Kicks Off the Show

The show began with two songs from Taylor Swift, kicking things off with a performance of "You Need to Calm Down" flanked by Todrick Hall, Dexter Mayfield and a group of drag queens. As she sang the song in support of the LGBTQ community, the words "Equality Act" flashed on the screen, as she once again advocated for the Senate to push for more non-discrimination protections. She brought up her petition again during her speech for Video of the Year.

She followed that up with a performance of "Lover," which got the crowd into a lovey-dovey mood. "Catfish" star Nev Schulman snuggled up to his wife, Jesse Tyler Ferguson and his husband Justin Mikita got cozy and Gigi Hadid showed support to her good friend.

Todrick had a moment of his own later when the "You Need to Calm Down" music video picked up a trophy for "Video for Good," making a speech about how he's "so grateful to be in a world" we're all living in now. "If you are a young child watching this show who feels different, who feels misunderstood, we have never needed you more than now to share your art, share your truth with the world, no matter what you identify as, who you identify as, who you love," he said to applause.

everything about this “Lover” performance got me but wow Queen Latifah grooving along pic.twitter.com/3wBuNOwIfd

We should be bowing down to Taylor for writing the greatest love song that ever was #TaylorOnTheVMAs pic.twitter.com/8JRdAHSU1F

It was a bit of a surprise when comedian Sebastian Maniscalco was announced as this year's host -- and didn't make much of a strong impression with his opening monologue following Swift's performance.

His opening joke: "Wow, listen, I didn't mean to come out to a cloud of smoke but backstage my mother's frying zucchini. It's not really her fault, she's making it for 20,000 people tonight."

He then took aim at influencers -- joking "Jersey has had one influencer for the past 40 years and that's Bruce Springsteen" -- and cancel culture and trigger warnings.

"If you feel triggered, or you feel offended by anything I'm saying up here or anything the musical artists are doing, [MTV is] providing a safe space backstage where you'll get some stress balls and a blanky," he began. "Also, Lil Nas X brought his horse, which will double as an emotional support animal. So if you'd like to talk to your ushers, they will send you back to where that's happening."

That was about it.

Now who wrote that opening? 🥴

Jesus, be any kind of televised standup where no one does a riff about triggers and cancel culture.

the #VMAs host preparing his jokes for tonight pic.twitter.com/fedLMcuK4M

get this flop off the stage... I'm not watching THAT

me to whoever the host is #VMAs pic.twitter.com/PbKuX8KZSb

Having lines like “I just learned what shade is” in his monologue is A CHOICE for a network like MTV. Whew. pic.twitter.com/6LcdRir9ng

Can't wait till tomorrow when Sebastian Maniscalco tweets “people didn't like me because I wasn't PC” when it's actually because he isn't funny.

Sebastian Maniscalco making “millennial” jokes to a room full of millennials who have no idea who the fuck he is is going over as well as you'd think. #VMAs pic.twitter.com/vNNdzAOrVR

Lizzo Was Good as Hell

Lizzo gave the show a huge shot of energy early on with her performance of "Truth Hurts" and "Good as Hell," singing her ass off in front of a giant inflatable bikini-clad butt.

And, honestly, we all did watching her.

Lizzo just gave us a sermon on self love and I — #VMAs pic.twitter.com/2K0HY73SB4

Queen Latifah STANNING Lizzo in the audience like a proud mum and I'm just pic.twitter.com/sycrIb8ura

When it was announced Missy Elliott would be picking up this year's Video Vanguard Award, we all knew she wouldn't disappoint. And she did not -- her performance was pure excellence.

She performed a huge medley of her hits, including "The Rain (Super Dupa Fly)," "Get Your Freak On," "Work It," "Pass the Dutch" and "Lose Control," all with epic choreography, costume changes and even an appearance from Alyson Stoner, the now 26-year-old who killed it as a featured dancer in a number of Missy's videos.

"That was fire!" exclaimed Cardi B after the performance, before giving the "living legend" her trophy.

"I cry every awards, but this Michael Jackson Video Vanguard Award means so much to me," said Missy, accepting her prize. "I have worked diligently for over two decades and I never thought that I would be standing up here receiving this award, so it means so much to me."

"I promise you, it don't go unnoticed, the support and love you all showed me over the years. I gotta start out by thanking God, without him I would not be standing before y'all. I ain't here to change nobody, but I know the God I served has gotten me this far," she said before thanking a number of her collaborators over the years, glam squad and Janet Jackson, thanking her for being "such a great friend."

She also recognized amazing videos from Busta Rhymes, Peter Gabriel, Madonna, before telling the late, great Aaliyah, "I love you, we miss you." Elliott then dedicated her award to the dance community around the world. "Y'all are not just props, y'all are the icing on the cake, y'all are the beat to the heart. I dedicate this to every dance community out there."

.@MissyElliott, you are a legend. You worked it and it was absolutely worth it. #VMAs

🤯 Missy Elliot is living in the year 2449 and we are just here to witness greatness #VMAs @MissyElliott pic.twitter.com/2kcnXo4Iwo

Missy Elliott invented music videos. It's not up for debate. #VMAs 👑

This performance was incredible! #VMAs pic.twitter.com/9vkxSfKBks

In tears watching Missy Elliot perform. That was one of BEST performances I've ever seen in my life. Omfg

Camila and Shawn Heat Up the Stage

Would they or wouldn't they? That was the question before Camila Cabello and Shawn Mendes hit the stage together for their first performance of "Senorita," the couple's latest duet.

Throughout the performance, the chemistry between them was palpable, as they inched closer and closer to each other as they sang. They kept teasing the audience, but, sadly, they never actually sealed the deal with a kiss.

Here's how it ended instead, and how people reacted online.

Shawn Mendes and Camila Cabello sign off from their "Señorita" #VMAs performance pic.twitter.com/Ist9e8ElPx

Looking for that @ShawnMendes and @Camila_Cabello SMOOCH like @joejonas at the end of #Señorita!👀 #VMAs pic.twitter.com/VMoXl8obsW

Presenting the trophy for Video of the Year, John Travolta at first joked that he shouldn't be the one announcing the winner after his "Adele Dazeem" fiasco at the Oscars. "I'll just mispronounce shit and f—k it up," he said.

After Queen Latifah announced Taylor Swift's name, she and a group of drag queens came to the stage to accept her award — and many online believe Travolta thought one of the drag queens, "RuPaul's Drag Race" alum Jade Jolie, was Taylor herself. Watch the video above -- and keep reading to see what viewers had to say about the actor's potential flub and new, bald appearance.

please tell me the presenter did not just mistake jade jolie as taylor 😭 #VMAs pic.twitter.com/rQojnjot8h

“Adele Dazeem! You finally made it!”

Love Travolta having no clue who Taylor Swift is. #MTVVMAs pic.twitter.com/gZ3ri1cnzX

We should all be celebrating Travolta's baldness in the streets. Like Obama '08 level partying.

Anybody else see John Travolta try to hand that award to one of the Drag Queens thinking she was Taylor Swift 😄, I chuckled #VMAs

The New Jersey-set award show ended with a medley of hip-hop artists from the Garden State. It began with Naughty by Nature, before Fetty Wap, Wyclef Jean and Queen Latifah, who drove up to the stage on a motorcycle before rocking out to "U.N.I.T.Y."

The number ended with them all coming together for "Hip Hop Hooray."

Other moments that made waves included Lil Nas X's choreo-packed performance of "Panini" and Miley Cyrus' post-split performance of breakup single "Slide Away," which was aired in black and white. Normani also danced her behind off to her new single, "Motivation," while The Jonas Brothers performed their latest songs "Sucker" and "Only Human." 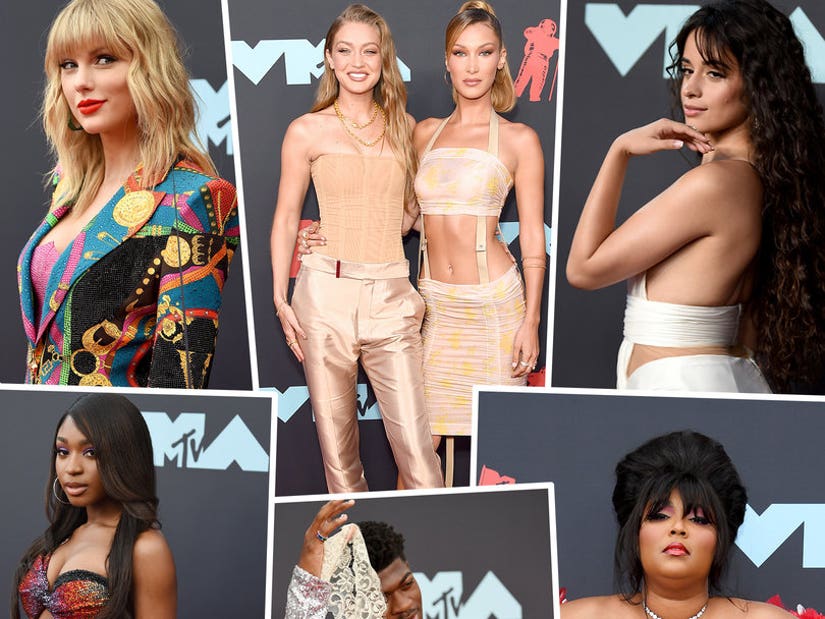