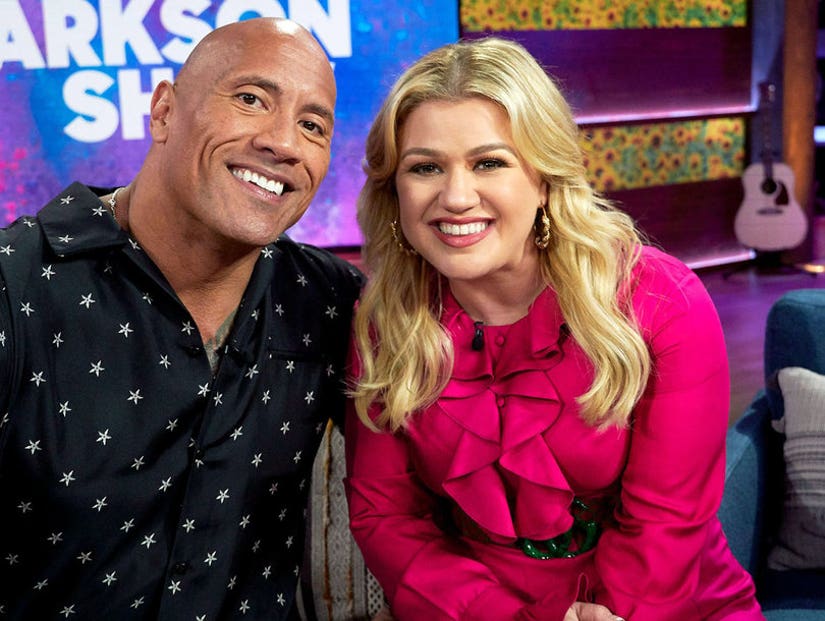 Kelly was reaching for her Kleenex during her premiere episode, which featured more than a few celebrity cameos.

Thanks to the perfect mix of musical performances, celebrity interviews and feel-good human interest pieces, "The Kelly Clarkson Show" got off to a strong start on Monday's debut.

The OG American Idol is the latest star to venture into daytime with her own syndicated one-hour talk show, putting her own spin on things in the series premiere.

The show kicked off with a big musical number, as Clarkson performed Dolly Parton's "9 to 5" on the Universal backlot. After an introduction from Steve Carell -- who screamed her name just like he did in "The 40-Year-Old Virgin" -- Clarkson finished the song on stage.

"I'm so excited, y'all," the Texas native said as she kicked off the hour. "When I signed onto this show I was like, 'Is it possible for [Carell] to shout my name on the very first episode?' and it happened ... what is my life?!"

As for why she performed Dolly's hit, Clarkson said "technically, this is my first 9-to-5 job," before explaining that the studio audience was made up of working women.

She continued her monologue by telling everyone she loves talking to people and is thrilled to have a job where she actually gets paid for it. She added that her show is all about "connections," saying "each of us has the power to make a profound impact on another person."

It was then time to move into the celebrity interview portion of the show, which suffered a bit of a hiccup in the days leading up to the premiere. "My first guest was supposed to be Kevin Hart," explained Clarkson, telling the studio about his recent car accident.

"Because Kevin couldn't be here, one of his good friends stepped the heck up," said Clarkson, before bringing out Dwayne "The Rock" Johnson. "He left his honeymoon," she explained, "His wife probably hates me!"

After presenting Clarkson with a sunflower, Johnson filled everyone in on how Hart was faring. "I connected with him today and these things happen in life and thankfully he was strapped in nicely to his carseat," he joked. "I'm only kidding, we spoke to the pediatrician and he said ... he's doing well, he's bummed he couldn't be here. I love the guy. Thank god, it could have been a lot worse, he's a lucky man. He knows it too. I wish him the best and a speedy recovery."

Hart suffered 3 spinal fractures and had surgery on his back. According to TMZ, he is walking "slowly and gingerly."

Clarkson and Johnson then had a conversation about dealing with fame and how to try and remain grounded after hitting it big. "Fame is tricky. It can be very intoxicating to people," said Johnson. "I think what's helped me and my family is to just remember where I've come from and keeping the hard times I went through in the past in the forefront of my mind, to help lead and guide me."

In regards to giving up some of your privacy or anonymity as a celebrity, Johnson added, "I remind myself what's the alternative? The alternative could be I go back to how things were when I had $7 in my pocket or getting evicted."

Clarkson could relate: "Me too, running from the repo man, I did it. I parked my car at my friend's apartment, like, 'Shoot, I don't know where it went, someone stole my car!"

The interview ended with a "9 to 5" reprise, with Johnson joining in to harmonize.

After a break, Kelly introduced a segment called "Rad Human," in which she gives the spotlight to a do-gooder in need of a hand. For the premiere, she brought out a woman named Sharon Strauss, whose Sunshine Pantry in Oregon had recently closed due to a "lack of funding."

Kelly surprised Strauss with a $20k donation from her community, presented to her by some of those who her organization has helped. Both women were clearly emotional during this segment, as they both clutched onto hankies. Clarkson's show then threw in an additional $10k donation.

After that, was a pre-taped video showing Clarkson meeting a few of her neighbors on the Universal lot -- including the judges of "America's Got Talent" and the cast of "This Is Us" -- before checking in with a group of women she loves on social media who call themselves the "Hot Mess Moms."

Watch her videos from the lot below: