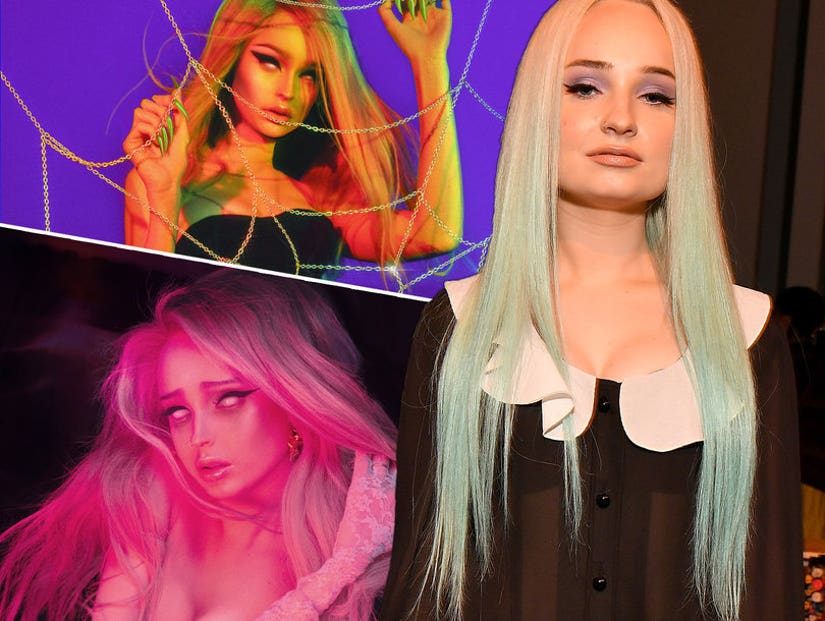 Mariah Carey may own Christmas, but when it comes to Halloween, there's no artist who's cornered the market quite like Kim Petras.

For two years in a row now, the German pop star has released holiday-themed bops for the horror-loving crowd with Volumes 1 and 2 of her album, "Turn Off the Light." Filled with songs with names like "There Will Be Blood," "Bloody Valentine," "Death By Sex" and, our favorite, "Boo! Bitch!" -- plus a title track featuring the one and only Elvira, Mistress of the Dark -- it's a must-have for any Halloween party.

The 27-year-old told TooFab she's just thrilled the response to "Turn Off the Light" has been so strong, because the concept initially threw some people off.

"I'm just so happy people like it. I was just telling everybody that I was going to do a Halloween record and they were all just like, 'What the f--k?'" she recalled. "People were like, 'Don't do that,' 'Why would you do that?' I just got really inspired, like I really wanted to do this."

2018 saw the release of the first eight tracks of the album, a mix of spooky songs and dance beats that quickly found a following. She dropped the rest this month.

"It started playing at every Halloween party last year and people kept listening to it all year and it became this culty classic thing," said Petras. "Now that I've dropped Volume 2, I feel like I've done what I set out to do because I've always wanted to do a full album of that. We called it Volume 1 because there was always going to be a Volume 2. It's a complete thing now, so that feels really cool. I'm just happy people like the music."

Petras said she "always wanted to be a spooky villain," noting that the bad guys/girls usually have the best songs in musicals and are "always the sickest" in general. While she also releases upbeat, club-ready songs that have nothing to do with the fall holiday, "Turn Off the Light" is Petras embracing that dark side. "The sound's completely different," she explained, saying these songs are also very "freeing" to write.

The singer told TooFab she watched a number of horror movies and listened to their soundtracks and scores to tap into her freaky side when it came time to put pen to paper. "I watch them all the time, I don't just watch them in October," she explained, while also hailing to music in films including "It Follows," "Hereditary" and -- noting it's not horror -- "Drive."

"I love most horror movies, the bad, the good, the old, the new, all types of horror movies I love," she continued. "Probably my all time favorite would be 'The Exorcist,' it's the classic, the most beautifully written movie. I love 'Rosemary's Baby' and I'm really obsessed with 'Krampus.' I watch that every Christmas now. I also love 'Hereditary.'"

Getting the chance to collaborate with Elvira was also a coup for Petras, who noted the Mistress of the Dark was pretty hard to lock down.

"She's always so busy. She's always booked so far in advance before Halloween," said Petras. "It was hard to get a hold of her but once she listened to the song, she said I want to do it. She just went into the studio and her voice is so amazing. She was really cool to work with."

Petras said she felt like the two really bonded and, when asked if they might ever treat fans to a live performance of their song, she crossed her fingers. "I would kill for that," she exclaimed, "I hope so and I'll fight until I die to make that happen!"

While Elvira might not be able to make it, Petras is kicking off her Clarity Tour in just days. Her largest solo tour to date, the stops will include her first performances of songs from both "Turn Off the Light" and her "Clarity" albums -- and she's thrilled to get out on the road.

"The set list is separated into different parts and there's a huge chunk of scary," she teased. "It's also the first time I'm performing a lot of songs from 'Clarity' because when I was touring, only 3 or 4 songs were out and now the whole thing is out. A lot of new stuff!"

She said her show on the 30th at the Shrine Auditorium in Los Angeles will be especially scary, calling it the Halloween show of the tour. "I'm gonna make that one really special and put some big twists in it," she promised. "L.A., for me, is kind of like the capital of Halloween and there's so much good Halloween stuff here you can do and the whole horror movie industry is out here. I'm really stoked for that show, I might be more intense than most of the other ones."

More than anything, though, Petras is looking forward to getting up close and personal with her fans. The singer said she's extremely tight with her supporters, often texting with them and sending them both songs and music videos for input before they're released.

She added that she most relates to the fans who "listen to my music to escape their problems," especially those who are struggling in school. "It's really important for me to stay in touch with them and help them through school," she explained, "because school can be really horrible for some kids."

Even with two albums, a new tour and a song on the upcoming "Charlie's Angels" soundtrack in 2019, Petras said she has no plans to slow down. When asked where she's going next, she said, "Right back to the studio!"

"I never really stop. I take a day or two off and then I'm like, 'I want to keep working,'" she said with a laugh. "Definitely going to drop more music, make more music and right now I'm excited for the tour. It's really next level for me. I've never had a show this good before and I'm excited for people to go see it."