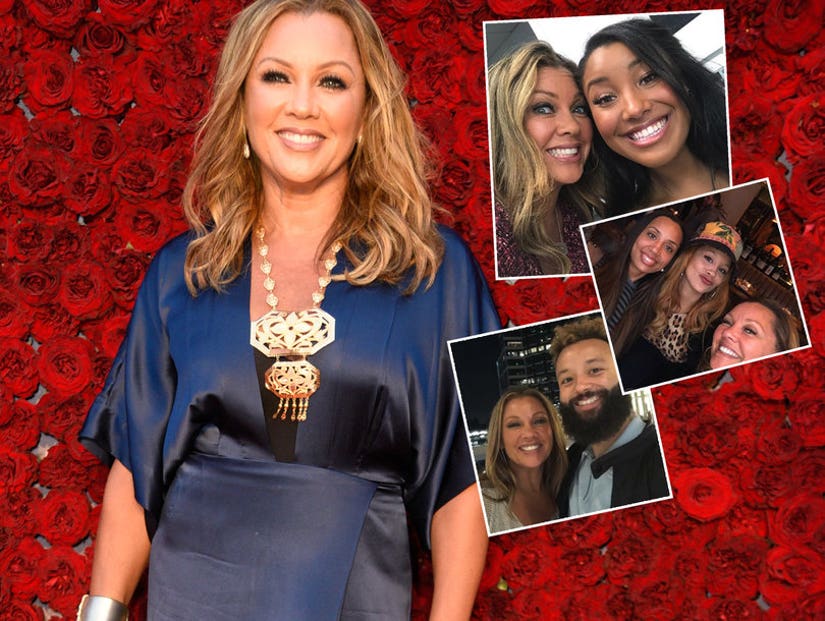 While Williams says "it's great to have dreams," she also advises inspiring performers to "follow your skillset."

Vanessa Williams has done it all. The former Miss America is also an 11-time Granny nominee, has won acclaim, a Tony nom and 3 Emmy nominations for her work on Broadway and TV and picked up an NAACP Image Award for her role in "Soul Food."

For all that and more, she's getting honored with a Lifetime Achievement In the Arts Award at Chapman University this weekend, where she'll also perform some of her biggest hits for an audience that includes her own daughter, Sasha Fox (above, top), who's currently a freshman at the school.

Ahead of the Chapman Celebrates Gala, TooFab caught up with Williams, where she opened up about seeing her four children "thriving" and looked back at her many successes and career milestones. Acknowledging she's been "lucky" for her skillset and opportunities, she also added, "I still have some more life to live!"

Congratulations on the big honor this weekend. Can you just talk a little about what it means to get the Lifetime Achievement Award and how it feels to be honored by the school your daughter is currently going to?

Well, it means that I'm old and I've been around for a long time! I'm very impressed with Chapman and it's been the perfect place for Sasha to thrive. She loves everything about it. She loves her department. She loves the faculty, her students, her friends, her roommates, the campus. I mean, she could not be happier and it couldn't be a better fit. So I'm thrilled as a parent. She's number four and she's definitely had the best college experience out of everyone, so that makes you very happy. They've just been lovely to work with.

So I'm singing 'Colors of the Wind' with the dance department, who will be performing a dance to it. And funnily enough, my middle daughter was accepted in the dance program at Chapman... Twelve years ago. She ended up graduating from the New School, but I'm glad that Sasha got a chance to ... she's in the Dodge School for film production. So she's on a different path. They've also asked me to do 'Save the Best for Last,' it'll be intimate.

And you are on the road now.

I'm always on the road. I probably do about four to six concerts a month. So whether it's a symphony. I just got off the phone for this Spokane Symphony Orchestra, I'm doing two dates with them, 21st and second in Washington. I did the Atlantis cruise this past week, two shows one night jumping on a cruise ship in Mexico in Cabo and did two shows at sea and landed in Puerto Vallarta and flew back home that day. So it all depends on what I've been asked to do, a variety of symphonies and concert dates and festivals, it all depends. But it's been nice.

This kind of speaks to everyone at Chapman, but what's one thing that you wish you knew about the entertainment industry when you were that age?

I danced my whole life. And then when I got into middle school, I started to do musical theater and then knew that was combining my singing and chorus and concert choir and also my musicianship -- both my parents and music teachers, so I played piano and French horn. So when I was a senior and I found out I could actually major in musical theater, like I can major at what I'm good at, it was easy for me to narrow down where I wanted to apply. And I applied to all schools at that time back in 1981 would allow you to do a BFA in musical theater and I got it every place. So when people ask me for advice, I say follow your skillset.

What are you good at? It's great to have dreams, I understand, and that's very encouraging. But what are you good at now? Continue to do that. And you never know where that's going to take you. That's where the stuff of dreams comes through, because when you're good at something, you're desirable. And that opens doors for you to move and expand and carry your skill set further.

As someone who has dabbled in a little bit of everything and since this is a Lifetime Achievement Award, we wanted to bring up some of the biggest milestones of your career and see if there is a lesson you learned from each one.

The milestones would be ... I mean, singing at the Super Bowl, I can tick that off. Singing at the Academy Awards and having the 'Colors of the Wind' win that night and being acknowledged in '96, that was fantastic. Starring on Broadway and my first Broadway show, 'Kiss of the Spider Woman' with my name up in lights and following the legendary Chita Rivera and getting the torch passed to me with a lovely note she left me saying, 'Welcome to the Web.' You know, those are the out of body experiences were like, 'Oh my god, I grew up in New York going to theater, and here I am on Broadway and having the baton passed by a legend that I used to study in college.'

Working with Stephen Sondheim on 'Into the Woods.' Again, I was singing Sondheim as a college freshman in performance class and getting turned on to beautiful Sondheim songs, and here I am at his brownstone. The first time was 'Into the Woods, second time listen was 'Sondheim on Sondheim' and I'm going out to dinner with him and James Lapine and having them considered friends.

Cicely Tyson, I've worked with her four times. Did Broadway with her on 'The Trip to Bountiful,' we did it at the Ahmanson, we did in Boston, we did a TV movie for it. And previous to that, I had a Christmas movie with her back in the '90s. Then I did 'Hoodlum' with her in '96 or '7. She's a legend. And I remember watching her as a child sitting on my parents bed. And she was an amazing actress and I consider her a friend. There's so many examples of those kind of influences that, you know, Diahann Carroll just passed, she played my mother in a TV movie that I produced for Lifetime. Lena Horne, who is one of my idols, I got a chance to win the Lena Horne Award and she acknowledged me and gave me special thanks. I've worked with a ton of people and I've really been lucky to be able to have experiences and a skillset that has afforded me a really varied career over thirty six years now.

Now you talk about working with a lot of legends, but you know you're one too!

I still have some more life to live, which is always a good thing. It's been a great life thus far and I'm so glad that I'm so happy to be acknowledged for what I've done and what I've meant to some people and be an inspiration for others. And I'm also really happy that it's a fantastic place where my child is thriving and I can be part of her world.

Seeing all your kids succeeding must just feel amazing.

Williams will be honored Saturday night at Chapman University, before a stage reading and Q&A of the new Edward L. Beck play "Ungodly Pursuit" at the school on Sunday.