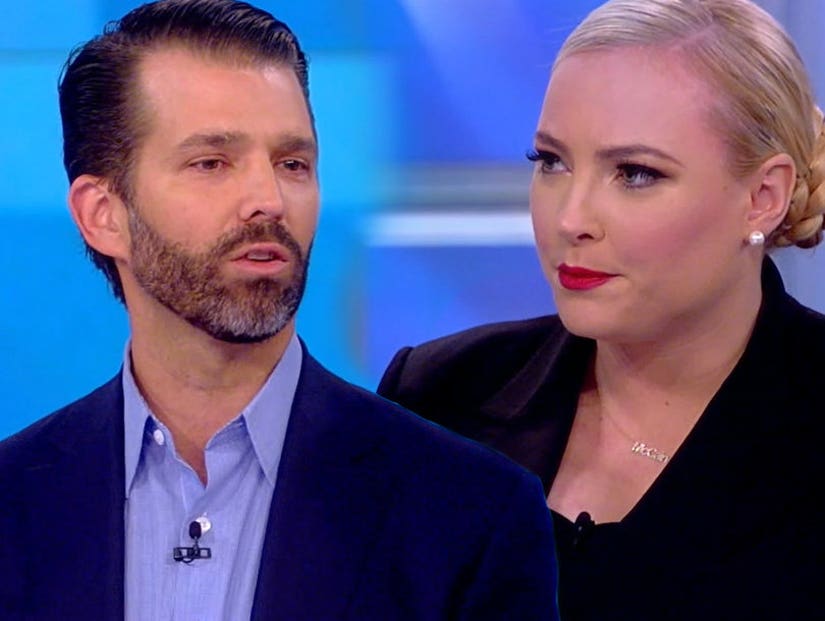 "Inflicting pain on so many people wouldn't have been worth it to me," says McCain.

The McCain family has been the target of the Trump family's verbal attacks many a time so when Donald Trump Jr. appeared on "The View" this morning," Meghan McCain made sure she put him on the spot for putting "a lot of people through a lot of pain."

Taking a very serious and almost somber approach to both Donald Jr. and girlfriend/Trump advisor Kimberly Guilfoyle, McCain kept a cool head when it was her turn to question the show's guests.

"You and your family have hurt a lot of people..." @MeghanMcCain says. "Does all of this make you feel good?"

Trump Jr.: "I don't think any of that makes me feel good, but I do think that we got into this because we wanted to do what's right for America." https://t.co/9coDczjMxa pic.twitter.com/hbbHQv24jV

She called out Donald Trump's rhetoric about Khizr and Ghazala Khan, the parents of a slain Muslim soldier who criticized Trump in the past. Saying she believes they "should be respected for the loss of their son," she then asked, "Does all of this make you feel good?"

"I don't think any of that makes me feel good," he began, "but I do think we got into this because we wanted to do what's right for America." He then sidestepping the question by listing off a bunch of alleged accomplishments from his father's administration, some of which the panel pushed back on.

"I understand," McCain said, before stating that her question, however, was about "character." She then reiterated, "Character in politics I believe is important, it was how I was raised. I understand what you're saying about policy, but when you're talking about attacking gold star families who have given the ultimate sacrifice more than any in this room have given and you put them through pain, does it make you feel like this was worth it?" 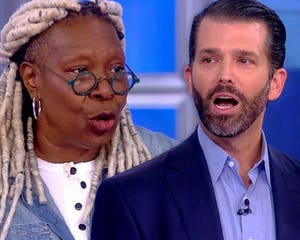 As he began to speak, Sunny Hostin added, "I don't think she appreciated your father attacked her father."

After he said it was worth it for him when he sees what he considers the positive affect of his father's policies. Guilfoyle then jumped in, saying there was "no finer human being" than the late John McCain.

"I consider him my friend, I miss him, I understand your loss," she said to McCain, as she began getting choked up. "It breaks my heart to hear anybody say anything about your father. I know how difficult it is. I know how difficult how it is for [Donald Jr.] when everybody is attacking his family."

"In all due respect, his father wasn't dying of cancer," McCain shot back. Speaking to Kimberly, she then added, "My final note and then I don't have anymore questions, try and bring civility back. You can do it. You're in the White House."

The heat kept coming toward Donald Jr., as Joy continued Meghan's line of questioning -- accusing the president of "lowering the discourse" by calling some Mexicans rapists, mocking the handicapped and with his comments on the "Access Hollywood" tape.

"We've all done things we regret. Joy, you've worn blackface," he then accused, referring to photos Behar herself shared on the show showing her dressed as an African woman. "Whoopi, you said Roman Polanski, it wasn't rape rape when he raped a child. Let's talk about serious things," he then added, referring to comments Goldberg made in 2009.

"I did not go in blackface!" exclaimed Behar, with Goldberg having her back. "Sorry, being black, I recognize blackface. This I can say. Now that you've broken this piece of ice, because I guess this is the fight you wanted."

He said it wasn't, but tried defending himself by saying it's fair game because they were talking about "character." Asked Whoopi, "Are you questioning my character? I didn't question anybody. I simply said that when you're talking about how your father's taken more heat than anyone else, that's not so."

As the shouting continued, Goldberg then threw to another commercial.

After another contentious final block and commercial break, the four cohosts had the table back to themselves. For more from "The View," check out our full breakdown right here.