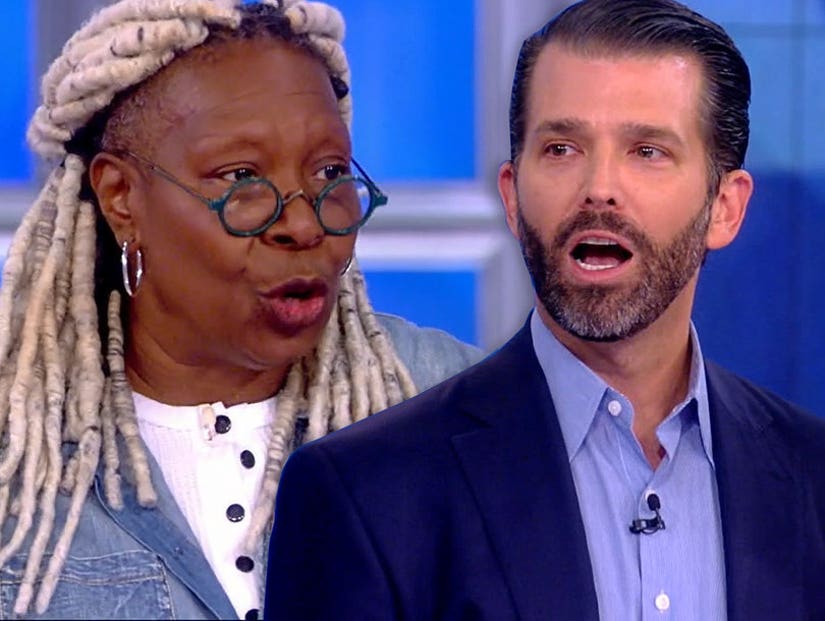 "The View" celebrated their 5000th episode with some major fireworks on Thursday, as President Donald Trump's son, Donald Trump Jr., and girlfriend Kimberly Guilfoyle joined the panel for an explosive conversation.

Heated shouting matches broke out throughout their joint appearance, as all the women took a crack at their guests, while Whoopi Goldberg had a workout ringing her bell to stop all the combative cross-talking.

The conversation began with conservative Abby Huntsman asking the first question, expressing her own disappointment in Donald Jr. sharing the name of the White House whistleblower on social media. After Abby called it something "dictators do," Trump Jr. defended himself by saying he was simply spreading information that had already been released on The Drudge Report.

He added that he had no regrets about his actions, before bringing up reports that CBS fired a former ABC employee who leaked video showing Amy Robach expressing frustration over the network killing a story on Jeffrey Epstein.

Joy Behar then chastised some of the red hat-wearers in the studio audience, shouting, "This is not a MAGA rally, calm down!" As the show threw to its first commercial break, the audience also began booing the guests.

"You and your family have hurt a lot of people..." @MeghanMcCain says. "Does all of this make you feel good?"

Trump Jr.: "I don't think any of that makes me feel good, but I do think that we got into this because we wanted to do what's right for America." https://t.co/9coDczjMxa pic.twitter.com/hbbHQv24jV

After the break, a somber Meghan McCain accused Donald Jr. and the entire Trump administration of hurting "a lot of people" with character attacks since their time in the White House. "Does all of this make you feel good?" she asked.

He sidestepped the question by rolling off a list of alleged accomplishments his father's administration has achieved so far, but Meghan pushed back.

"Character in politics I believe is important, it is how I was raised. I understand what you're saying about policy, but when you're talking about attacking gold star families who have given the ultimate sacrifice and you put them through pain, does it make you feel like this was worth it?" she asked.

As he began to speak, Sunny Hostin added, "I don't think she appreciated your father attacked her father."

"I understand that and I am sorry about that, they did have differences," he said, before sharing his condolences to Meghan for the loss of her aunt as well. "It's for me, it would not have been worth it," she told him, "Inflicting pain on so many people wouldn't have been worth it for me."

After he said it was worth it for him, Guilfoyle jumped in, saying there was "no finer human being" than the late John McCain. "I consider him my friend, I miss him, I understand your loss," she said to McCain. Getting choked up, she continued, "It breaks my heart to hear anybody say anything about your father. I know how difficult it is. I know how difficult how it is for him when everybody is attacking his family."

"In all due respect, his father wasn't dying of cancer," McCain shot back. Speaking to Kimberly, she added, "My final note and then I don't have anymore questions, try and bring civility back. You can do it. You're in the White House." 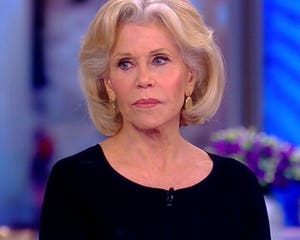 Whoopi then went off after Donald Jr. said that during President Obama's time in office, there was "zero criticism for anything."

"Now what you can't do, is you can't change the past," Goldberg shot back. "Obama became president and the first thing that was said to him from the other side is we're gonna make sure you're a one term president. I just wanna say, who said it? I believe Mitch McConnell said it. I'm just saying to you ... part of being president is having a pair that can take whatever heat comes to you."

The heat kept coming toward Donald Jr., as Joy continued Meghan's line of questioning -- accusing the president of "lowering the discourse" by calling some Mexicans rapists, mocking the handicapped and with his comments on the "Access Hollywood" tape.

"We've all done things we regret. Joy, you've worn blackface," he then accused, referring to photos Behar herself shared on the show showing her dressed as an African woman. "Whoopi, you said Roman Polanski, it wasn't rape rape when he raped a child. Let's talk about serious things," he then added, referring to comments Goldberg made in 2009.

"I did not go in blackface!" exclaimed Behar, with Goldberg having her back. "Sorry, being black, I recognize blackface. This I can say. Now that you've broken this piece of ice, because I guess this is the fight you wanted."

He said it wasn't, but tried defending himself by saying it's fair game because they were talking about "character." Asked Whoopi, "Are you questioning my character? I didn't question anybody. I simply said that when you're talking about how your father's taken more heat than anyone else, that's not so."

As the shouting continued, Goldberg then threw to another commercial.

After another contentious final block and commercial break, the four cohosts had the table back to themselves.

"I love hosting this show with you everyday," said McCain, "It was a wild day on the 5000th show, I'm really happy to be with you guys." Speaking to the audience, Whoopi ended the episode by saying, "It is never a dull time on the show, it is never boring and we're so glad that you were watching."