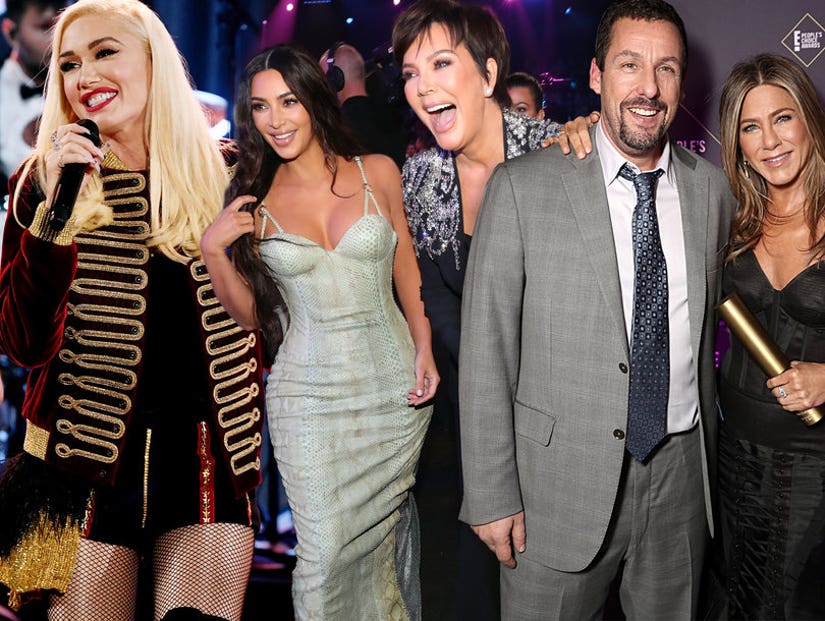 Kim Kardashian and her family had a special message for fans of "Keeping Up With The Kardashians."

The 2019 People's Choice Awards brought out the best and brightest of Tinseltown to the Barker Hangar in the tony Los Angeles neighborhood of Santa Monica on Sunday.

The 45th annual gala -- hosted by E! Network -- celebrated all that is pop culture as musicians, actors, social media stars and podcasters rubbed elbows on the red carpet.

"Avengers: Endgame," "Game Of Thrones", and Taylor Swift were some of our favorites recognized with nominations as the staged was graced by the A-list talents of Zendaya, Robert Downey Jr., Kim Kardashian, Jenna Dewan, Sarah Hyland, Joey King, KJ Apa, Terry Crews and more.

Check out some of the night's more memorable moments:

Making his first public appearance since his terrifying car crash, Kevin Hart was on hand to pick up the trophy for Comedy Act of 2019.

"I want to thank my wife and kids, who really stepped up to the plate for me," he said, as wife Eniko Parrish and daughter Hendrix Hart sat in the audience. "You have no idea the effect you have on us as entertainers your energy, your support. It means the world and I truly want to thank you guys for being there for me in my difficult time."

The "No Doubt" singer stole the spotlight in a strapless white Vera Wang stunner as she took to the stage to accept the 2019 Fashion Icon Award, giving a nod with the words "fashion icon" written in black on her long train.

"I just always, always loved fashion. It was just one of those very instinctual things, I think probably because of my mom," the 50-year-old rock star said during her acceptance speech.

She added a shout-out to her boyfriend in the audience by saying, "I love you, Blake Shelton, you're a babe!"

Kim Kardashian, Kourtney Kardashian, Khloe Kardashian and Kris Jenner brought all the glamour as they stepped up to grab The Reality Show of 2019 gong for their uber-popular "Keeping Up With The Kardashians."

Rocking a vintage snakeskin Versace number, Kim thanked their legion of fans for following the show since the beginning.

"You guys have been there for us for 18 seasons, we're almost done with season 18. You've seen so many evolutions and growth and transformations from all of us, personally, professionally, and we're just so glad that we're still entertaining, 18 seasons later, so thank you," she gushed.

But before the ceremony, the koven spoke with Giuliana Rancic on the red carpet and were asked to name the designers of their dresses.

'I didn't plan this - Naeem Khan? Is that how you say it?' Kourtney began explaining as Kim jumped in front of the microphone.

'All that matters is that we're wearing KKW Diamonds! That's all that - we're all wearing that,' said Kim, promoting her new fragrance line.

'I was saving you since you didn't know who you were wearing,' Kim told Kourtney with quite a look. 'No, it's Naeem Khan, I just didn't know how to pronounce it,' countered Kourtney and the coldness could be felt as Kim simply replied, "Oh."

The actress was introduced by her frequent co-star Adam Sandler before she graciously accepted the People's Icon Award.

After Adam lavished praise upon Jennifer, the "The Morning Show" star tipped her hat to the sitcom that made her a household name.

"If I have any claim to this word icon, it's only because I was able to be on an iconic show with an iconic cast and [with] an iconic haircut," Jen quipped.

"'Friends' was truly a gift of a lifetime, and I wouldn't be standing here without that amazing show, without those five other amazing actors, and without an audience that stuck with us for a decade."

Check out the gallery above for all the must-see fashion of the night -- and check out the full winners list below!

The People's Icon of 2019: Jennifer Aniston

The Fashion Icon of 2019: Gwen Stefani

THE ANIMATED MOVIE STAR OF 2019

THE COMPETITION SHOW OF 2019

THE NIGHTTIME TALK SHOW OF 2019

THE COMPETITION CONTESTANT OF 2019

THE BINGEWORTHY SHOW OF 2019

THE BEAUTY INFLUENCER OF 2019

THE SOCIAL CELEBRITY OF 2019