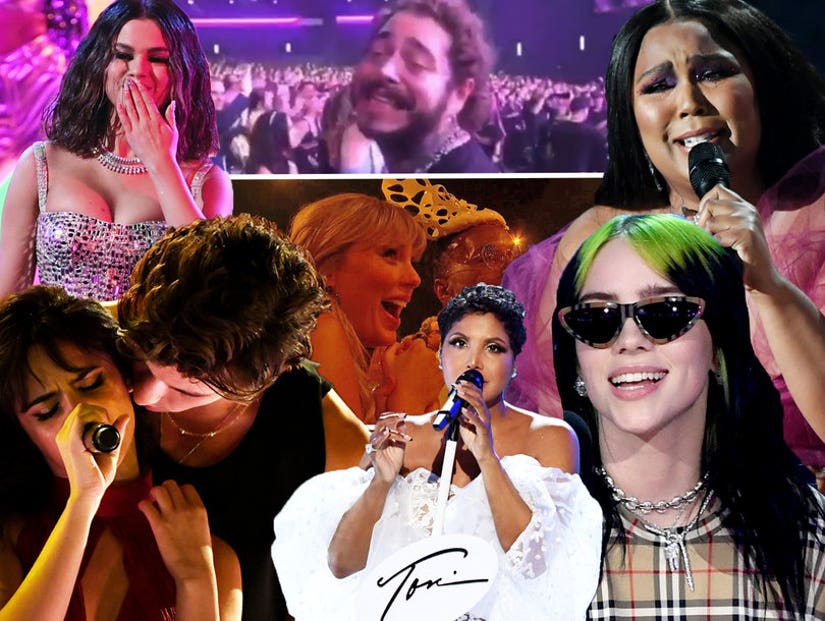 Here's who blew up social media during the AMAs.

The hottest names in music got wild on Sunday night at the 2019 American Music Awards.

Hosted by Ciara, the show was a memorable one -- with performances from Taylor Swift, Kesha, Camila Cabello and Shawn Mendes, Billie Eilish, Shania Twain, Christina Aguilera, Lizzo and so many more. 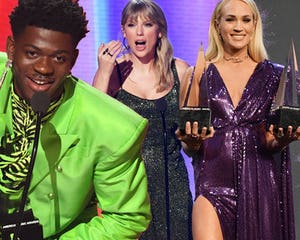 If you missed the 3 hour affair, worry not, we've got your covered right here!

Check out some of the night's wildest fashion in the gallery above -- and see which moments had social media buzzing below.

Making her big return to the stage with big music, Gomez kicked off the show with her ballad "Lose You to Love Me." Keeping things dramatic, the show shot her with a black and white filter, as she sang in a long black gown.

Midway through the performance, however, she sped it up with her followup single, "Look at Her Now." Stripping off the dress and stepping out in a sparkly leotard and black boots, she worked some choreography and got the crowd on its feet.

Social media was kind of split on the performance as a whole.

Selena Gomez looking for the key she's supposed to be in #AMAs pic.twitter.com/jAMebxlTCH

selena gomez: ok this is my big come back. sing it loud and proud.

i could tell how nervous you were and i am so proud of you @selenagomez 🖤💚 #AMAs pic.twitter.com/YuDb1rFEeQ

It's been how long since @selenagomez has performed!? I'm sure she was hella nervous singing such personal songs for the first time and we don't know what she's going through physically/health wise. I'm not here for the shady tweets ✋ #AMAs

The first two acceptance speeches of the night were bleeped by ABC, as both Billie Eilish and Halsey were censored as they collected their trophies.

First was Eilish, who won for Favorite Artist - Alternative Rock. She was honored to even be invited at the show, saying she "grew up" listening to everyone's music in the room. "Thank you for the fans and the supports and anyone who gives an eff about me, I appreciate you," she continued. While the "eff" was cut out of the live telecast, it can be heard in the video above.

.@halsey's "Without Me" is your #AMAs Favorite Song - Pop/Rock! pic.twitter.com/MlnW7XKOek

As for Halsey, she picked up the Favorite Song trophy for "Without Me." She also got bleeped when she thanked the fans, saying, "I'm thankful to the fans because they're the people who really give a shit about music." Again, while "shit" was censored on TV, you can see it unedited above.

Lizzo Performance Was Good as Hell

Lizzo proved she was 100% that vocalist when she hit the stage to sing her ballad "Jerome."

The performer is quickly becoming the artist to watch, killing it at every single award show she's a part of -- and we're clearly not the only ones who are totally here for it.

SHOW THE GIRLS HOW TO SING LIVE LIZZO!!!!

LIZZO JUST DID THAT!!!!! #AMAs pic.twitter.com/ceWKt7clzX

Ummm can we just take a moment for @lizzo's power vocals. I stand a ballad Queen. #AMAs

people call lizzo so many things, but i hope we can all agree that she's a GODDAMN INCREDIBLE ENTERTAINER #AMAs
pic.twitter.com/xmf9PxNLkR

Camila Cabello and Shawn Mendes once again teased their fans, everyone in the audience and even Taylor Swift during their performance of "Senorita." While it wasn't anything new for anyone who's seen them do this song before, we all were not-so-secretly hoping they would finally share some on-stage PDA and lock lips at the end of the performance.

Taylor reallllly hoped it would happen, as you can see in the video above, but it didn't. While they both sounded great, fans were left once again wanting more.

this was taylor the whole time during Camila and Shawn's performance LMFAOOOOOO pic.twitter.com/EIDjoSsZ8D

Me when Shawn & Camila didn't kiss yet again #AMAs pic.twitter.com/8P31sl8quP

"Saturday Night Live" alum and "Single Parents" star Taran Killam blew up on Twitter after he made the expression above during Kesha's performance of "Tik Tok."

Yep, the singer brought us all back to the glitter-filled days of 2009 by breaking out her first hit after singing "Raising Hell" with Big Freedia. While the audience went wild for the classic single, Killam's face said something else altogether.

Yeah, he clearly knew he was on camera and was likely just kidding around, but it became a moment nonetheless.

The face all of us had when Kesha busted out tik tok 😂 #amas pic.twitter.com/26yi4goskR

The legendary performer, 52, proves she's still got it when she hit the stage for a throwback performance of "Unbreak My Heart," for the 25th anniversary of her first AMA win.

She looked gorgeous in an all-white gown, surrounded by violinists also in white. After hitting one of the biggest notes in the song, she then did a well-deserved diva strut down the stage.

We don't need a reason for a Toni Braxton performance other than the fact that she wants to perform. PERIOD. Your girls need to take NOTES. #AMAs

Okay the microphones weren't broken, they were all just bad at singing, Ms.Toni Braxton confirmed they were working well #AMAs #AMAs2019 pic.twitter.com/6QoLH4j7XT

Okay can we talk about Toni Braxton's performance at the #AMAs

Boy she is so radiant as ever and that is one classy performance, I gotta say this is one of the best highlight of #AMAs2019 pic.twitter.com/iXjpN4ASq7

Taylor Swift, Artist of the Decade

Going into the AMAs, we really weren't sure what Taylor was going to do with her big performance to go with her Artist of the Decade honor. There was a ton of drama with Scooter Braun leading up to Sunday night, but her medley went off issue-free.

She kicked off her epic mashup with her sexism/double standard song "The Man" from her new album, flanked by young female dancers. This seemed to be the only part of the performance that could be aimed at Braun, Scott Borchetta and Big Machine.

The Man intro was EVERYTHING. Taylor was in a PRISONERS OUTFIT WITH ALL HER PAST ALBUMS ON IT FOR YOU TO SEE.

She then tore into "Love Story," "I Knew You Were Trouble" and "Blank Space," before Halsey and Camila Cabello joined her for "Shake It Off." Her BFF, Selena Gomez, didn't pop up during the performance, but she was seen in the audience with Taylor's parents, singing every word.

Swift then slowed it down to perform "Lover" at the piano, as Misty Copeland and another interpretative dancer did their thing around her. She kept her speech drama-free as well, thanking Carole King for inspiring her, before showing her appreciation for her fans.

THE FANS CHANTING TAYLOR IN THE BACKGROUND HAS ME. MY HEART WE LOVE YOU TAYLOR #TaylorOnAMAs @taylornation13 @taylorswift13

Selena Gomez singing along to Taylor Swift's performance of 'I Knew You Were Trouble' at the #AMAs pic.twitter.com/OQhuEPrvlM

THE KIDS ONSTAGE WITH HER WAS THE CUTEST THING EVER!!!!!! #TaylorOnAMAs #AMAs @taylorswift13 @taylornation13

The Prince of Darkness made a return to the stage to join Post Malone and Travis Scott for a performance of "Take What You Want" and Twitter was obsessed with his appearance. It was an energetic performance from Ozzy, who had to push his 2019 tour to 2020 after injuries sustained during a fall at his home earlier this year.

Social media lit up over his dance moves in the back as the other two performed.

Watching Ozzy Osbourne try to dance while sitting at the back of the stage is the best thing I've ever seen. Someone come get your grandpa 😂

Shania Twain Shuts It Down

Taylor Swift may have been artist of the decade, but she was just like everyone else and singing along in the audience as Shania Twain proved age ain't nothing but a number with a career retrospective of her own that closed the show. Only this one took us all the way back to the '90s when Shania was the reigning country crossover queen!

The 54-year-old legend kicked things off with an unexpected medley of current hip-hop and pop hits, seated and accompanying herself on guitar (including a snippet of Taylor's "Shake It Off"), before getting her groove on with the kind of high-energy dance moves that made her a concert-goers dream throughout her career.

She even proved that Taylor isn't the only one who can rock a leotard on stage as she was clearly prepping for a series of show-stopping performances when she kicks off her Las Vegas residency next month.

At the end of the night, the most-awarded woman of the evening even jumped up on the stage to embrace the icon who was clearly a huge career inspiration for her. Fans were loving the diva love, Shania proving she's still got every bit of it, and even Post Malone grooving from the audience.

Not a phone in sight. Just Post Malone vibing to Shania Twain at The #AMAs 😌pic.twitter.com/QuEshPaG2P

I never knew I needed Post Malone rocking out to Shania Twain but I really did! #AMAs pic.twitter.com/3WDuAr1tLk

#Video | Taylor hugging Shania Twain on stage! Taylor has broken the record for most wins at the #AMAs! pic.twitter.com/sCfIn5iZKv

SHE DID THAT AND YOU ALL BETTER BOW DOWN TO THIS LEGEND. OMG IM IN TEARS! @ShaniaTwain #shaniaamas #amas pic.twitter.com/w10Y64YyHZ 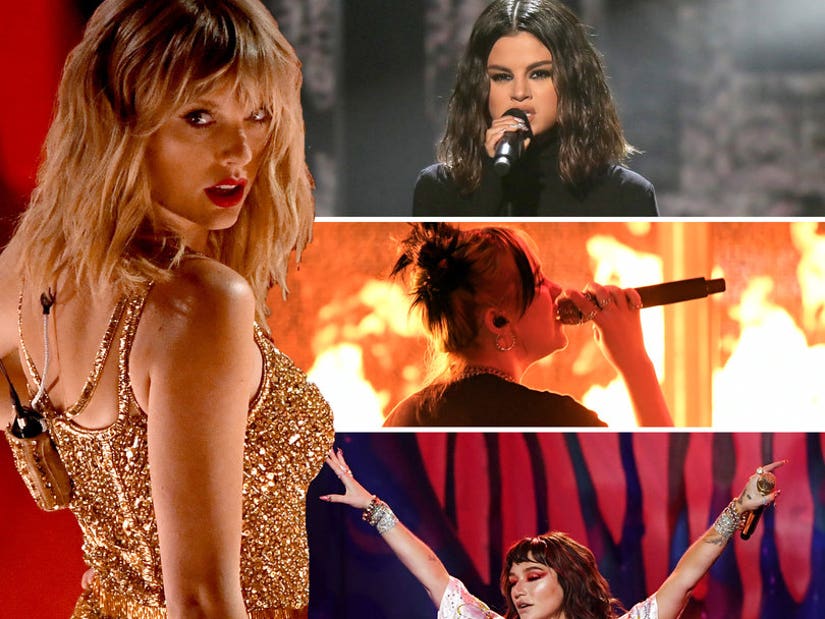