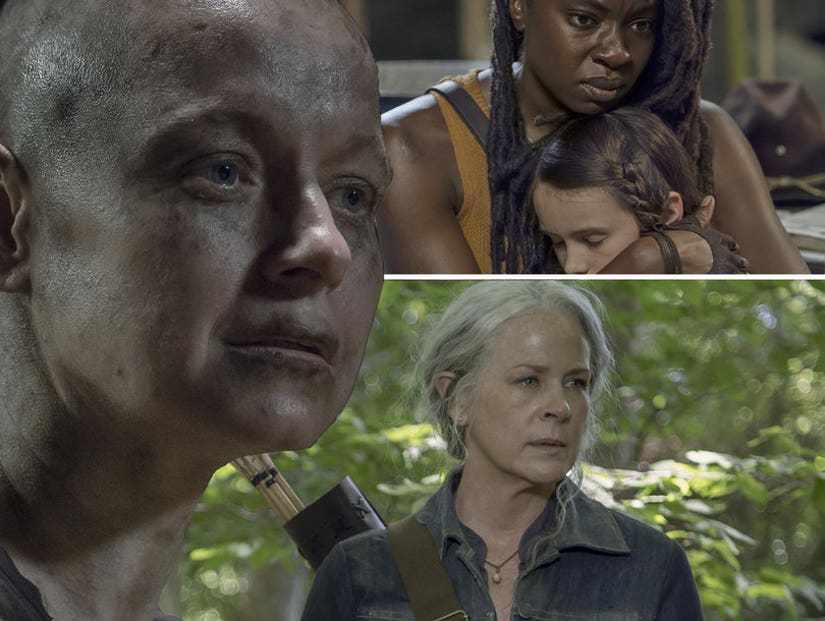 The episode featured another shocking death and one helluva cliffhanger.

It's been a full year since The Whisperers made their presence known on "The Walking Dead," killing Jesus in the process. And tonight, our favorite survivors finally took a huge step closer to stopping them.

The episode, titled "The World Before," sent Michonne in a new direction with a new friend, brought Dante's storyline to a bloody (and very surprising) conclusion and ended with Carol and Daryl stumbling upon a gigantic discovery.

Let's break down the three big questions we're left asking until the show returns in early 2020.

What Will Go Wrong for Michonne?

En route to Oceanside, Michonne, Judith and Luke decided to stop in at a nearby library for some new books and Rachmaninoff, only to be overrun by walkers. A mystery man who we'd later know as Virgil saved Luke from certain death, however, and ran off. That wouldn't be the last they saw of him.

Later, once at the beachfront community, Virgil was caught stealing supplies. He claimed they were for his family, who were located on a nearby, ominously-named Bloodsworth Island, a former Naval base that was "hard to find and fortified." While Michonne was initially hesitant to trust him -- the big Whisperer/Dante betrayal was still very raw -- the two struck up a deal.

In return for giving him a ride home on one of Oceanside's boats and as payment for some of the supplies he already stole, Virgil would surrender any Naval weapons to Michonne. The main thought going through her head: "There could be weapons big enough to kill a herd, take out Alpha once and for all."

Judith agreed the decision "could end the war" and said goodbye to her mom. Michonne gave her a walkie-talkie and told her to keep in touch, as often as possible. This better not be the last time they see each other.

We know this is Danai Gurira's last season on the show and she only filmed a handful of episodes. We have to be nearing the end for her, appearance wise, and sending her off to a new location feels dangerous. The question now is whether she'll return alive or not -- or somehow perish while securing the weapons everyone else needs to kill Alpha and her herd once and for all.

If she does die on her mission to the island, it'll be up to Virgil and whoever else is in his crew to make good on their deal.

What Will Happen to Gabriel?

Last week, we thought secret Whisperer Dante might be able to cover up Siddiq's murder and say he hanged himself. But Dante wasn't so lucky. Instead, Rosita showed up moments after he killed his friend and, when Siddiq's corpse began walking, there was no hiding it.

Dante was then thrown into Alexandria's one jail cell -- which has had quite the revolving door lately -- and interrogated. Through flashbacks, we learned Lydia never saw his face and that he snuck into town with another group he befriended in the woods and actually killed the old woman we thought died from water poisoning.

He said killing Siddiq was never part of the plan, which was to "encourage your paranoia about" the Whisperers to push everyone into making bad decisions. Welp, it kinda worked and not in a way benefitting him, as Gabriel surprised us all by stabbing Dante to death!

The rage in Gabriel slowly built up over the episode, as he first watched back Dante's interview to join the community. It grew stronger as they spoke one-on-one in the jail cell, saying his family "will never be the same now" with Siddiq gone. Then, after asking if we all "deserve a second chance," he said, "I don't know, sometimes we get one anyway," before killing Dante dead.

The downside here, no more intel out of Dante. The upside: Gabriel finally got a lot more interesting.

The question now is whether anyone else -- besides Rosita -- will learn that Gabriel was responsible for Dante's death and what they'll do to him if they find out.

How Will They Stop the Herd?

After learning Alpha was lying about Lydia's death, Gamma started to trust Aaron a bit more and struck a deal with him. If Gamma could offer solid intel on the location of Alpha's massive horde of "guardians," Aaron would consider letting her see her nephew, who is now being raised by his people.

Meanwhile, Daryl raised concerns about Carol. Not only was he disappointed she didn't tell him her plan to use Lydia to expose Alpha's lie, he was angry she clearly has a death wish. "You want [Alpha] dead so bad, you don't even care what happens to you. It's been like talking to a god damn ghost," he told her. "She's a dead woman anyway. We have a future, don't let her take that too."

They hugged it out and things seemed promising, for a moment. Carol, however, was still triggered at the sight of the bald-headed Big Bad later. After finding evidence of the herd where Gamma said they'd find it, Carol spotted Alpha, chased her into what looked like a cave, only to find a giant walker party waiting inside. Yep, they found the herd.

But did Alpha actually want them to see it? Is she hiding among them? And, now that they've found it, how will they kill it? Some grenades or a machine gun would sure be helpful. Michonne, hurry up!