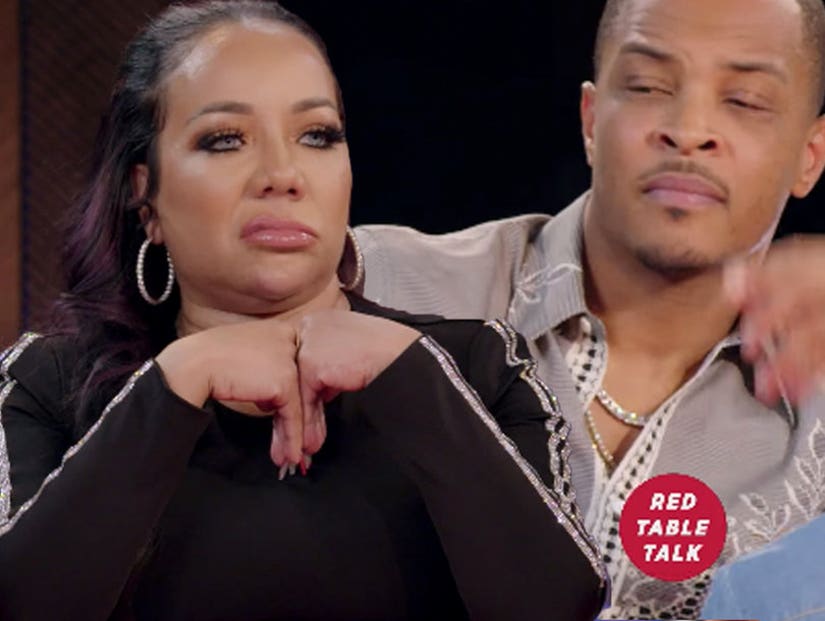 "Excuse me," Tiny tells her husband, after he tries to interrupt.

After staying largely silent during her and T.I.'s "Red Table Talk" about his self-described "Hymen-gate," Tameka "Tiny" Cottle is sharing her truth about their relationship in a followup episode.

Dropping Monday on Facebook Watch, Part 2 will show the two as they "share the ups and downs of their marriage, including public controversies, prison, infidelity and filing for divorce."

And the promo clips are juicy!

In one, Tiny opened up about how everything changed for her when her husband went to prison after their wedding in 2010, following a probation violation.

"Once I got on my own two feet, I felt like I should have a voice too and that voice was a little different from what he was used to," she explained. "So that, to me, is what caused the issue. It wasn't because I'm just being outlandishly disrespectful."

"If you recall, excuse me ..." she continued, as he tried to interject. "If you recall, you could not move, you could not go anywhere, I was still in the house like I was on probation doing all the things. But because I had a voice that was not so timid -- to me, this is my outlook on it -- I feel like he felt like, 'This is not the woman I left and this is not what I want. I want someone that, if I tell her this, she's gonna listen and she's gonna do this the way I want her to do it.'"

"He went and found him somebody that he could be like, 'Hey, don't move, do that,' and then I was not her," she continued. Cheating rumors have dogged their relationship, something they will address head on in the full episode.

In another clip from the episode, the rapper shared his side of the story as well.

"When I went to prison I guess she felt like, 'Well now I have to figure out what I'm going to do," he explained. "Because I don't have you here to continue the protocols and the practices that we have established in the fundamental stages of this relationship."

"So when I got back the world was upside down. She kinda had an air like, 'It's my time,'" he continued. "I thought we were going to hit the ground running and get back to things being the way they were and that was an acclimation period that I had to make it through."