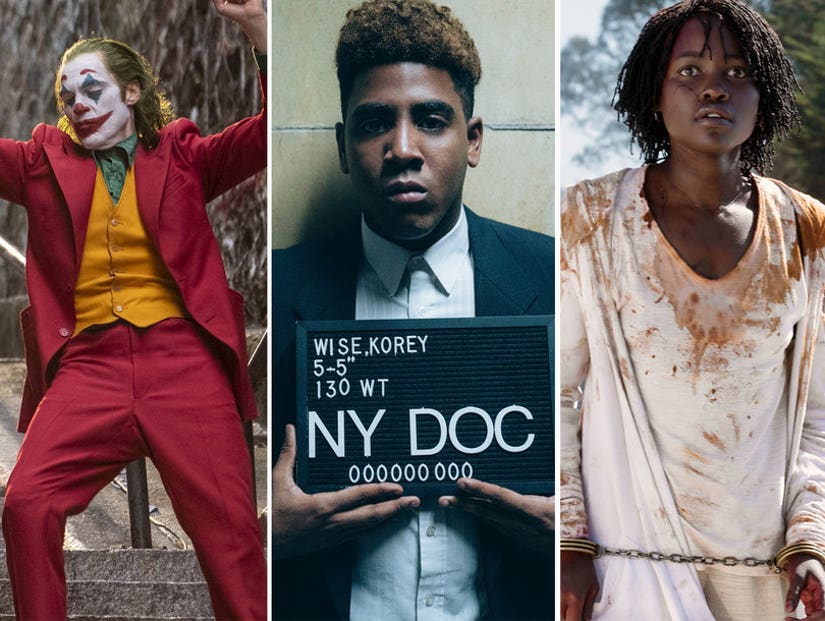 Some of these are real head scratchers.

The Golden Globe Award nominations were announced early Monday morning, which means outrage over some of the puzzling choices was quick to follow on social media.

Every year, the Hollywood Foreign Press Association gets called out for their somewhat baffling decisions and today was no different. Most of the criticism isn't anything new either, as the HFPA was once again questioned for its lack of female and PoC nominees -- with Ava DuVernay and her "When They See Us" cast being the most glaring omission of them all.

Also among the notable snubs: "Game of Thrones," which only garnered one nomination for its final season, "Veep," which got zero for its swan song, Adam Sandler and "Uncut Gems" getting no love and shows including "Watchmen," "Euphoria" and "Schitt's Creek" getting shut out too. Many also believed Jeremy Strong deserved a shoutout for his work on "Succession," after the HBO show picked up a few nominations.

While those snubs and surprises hurt, here are the 5 that quickly started trending on Twitter.

Where Are the Female Directors?

Natalie Portman famously called out the HFPA during the awards themselves in 2018 after they didn't nominate any female directors. The unfortunate trend continued in 2019 and again for 2020. Today's nominations mark the fifth year in a row the HFPA has only recognized the work of men, despite there being no shortage of women to celebrate.

Among the women who could have been nominated: Greta Gerwig for "Little Women," Lorene Scafaria for "Hustlers," Lulu Wang for "The Farewell," "Honey Boy" helmer Alma Har'el and Olivia Wilde for "Booksmart." Har'el was one of the many tweeting about the snub this morning.

Made films this year that reached people and touched them.

That's our awards.
No one can take that away.

HOW CAN THERE BE NO WOMEN IN THE BEST DIRECTOR CATEGORY WITH ALL THE FILMS RELEASED THIS YEAR WHEN THERE IS A RECORD-BREAKUNG AMOUNT OF FEMALE DIRECTED FILMS EVER?! #GoldenGlobes pic.twitter.com/CvpjJxv4KB

All snubbed. Not a single female director nominated this year, despite their films receiving nominations in other categories and awards. Don't tell me this business is fair. #GoldenGlobes

Super depressing that even in a year with several strong female directed awards contenders like Hustlers, Little Women, Beautiful Day in the Neighborhood, The Farewell, etc they still refuse to nominate them for director like bitch what do we have to do???

One of the men who was nominated for Best Director was "Joker" helmer Todd Phillips. The movie picked up four nominations total, including Best Motion Picture - Drama, Best Actor for Joaquin Phoenix's performance and Best Original Score.

While fans of the DC film celebrated the nomination, critics of the villain's origin story were much less enthused. The nomination also stung even more to those who were hoping any woman would be recognized in the category.

Me watching Film Twitter have a collective aneurysm at Todd Phillips getting that director nom over their faves pic.twitter.com/4NdPUM8igI

the golden globes nominated todd phillips for best director over greta gerwig, lulu wang, marielle heller, and lorene scafaria.... AND FOR WHAT? pic.twitter.com/X3bEyFvKkr

it is completely absurd to me that in a year where at least as many of the best films were directed by women as men, not one got nominated for best director YET todd phillips got nominated for his edgy boomer clown movie

The collective shit-throwing from the FILM Twitter Bros™ and Letterboxd Thots™ over Todd Phillips getting the #GoldenGlobe nod for Best Director..... Ya love to see it pic.twitter.com/ZPFWhXjW3g

When They See Us Totally MIA

Ava DuVernay's "When They See Us" earned 11 Primetime Emmy nominations earlier this year and picked up a win for Outstanding Lead Actor win for Jharrel Jerome. The Netflix series, however, was completely ignored by the HFPA in one of their most glaring omissions.

Series star Aurora Perrineau tweeted her disappointment, writing, "When they see us being snubbed by the Golden Globes is consistent with the way people can't talk about our stories. It was 'too hard to watch,' yet it is our reality. Proud of @ava and the Exonerated 5. Never stop telling our stories. Onward and upward!"

After the noms broke, actress Logan Browning -- who stars on Netflix's "Dear White People" -- also tweeted that "finding people of color is an unfruitful scavenger hunt." She added, "WHERE IS WHEN THEY SEE US? Oh right, they don't."

The lack of love for this show, paired with snubs for Zendaya and Lupita Nyong'o, didn't paint a flattering picture of the HFPA.

WHEN THEY SEE US is trending nationally. A good thing. More light on the Exonerated 5 and the system of mass criminalization this nation has constructed. For more, watch the project on @Netflix. For even more, go to @ColorofChange or @Innocence. xo pic.twitter.com/woPpSOY3eZ

When they see us being snubbed by the Golden Globes is consistent with the way people can't talk about our stories. It was “too hard to watch”,yet it is our reality. Proud of @ava and the Exonerated 5. Never stop telling our stories.Onward and upward !
Love to my WTSU fam 🖤

the fact that regina king, zendaya, jharrel jerome, lupita and when they see us were all shut out of the golden globes ... hmm i wonder what they have in common 🧐🧐🧐

The #goldebglobes noms just broke my heart. I didn't want to care, but Finding the people of color is an unfruitful scavenger hunt. All white, male directors. Whoever nominates needs the bubble they occupy popped ASAP.
WHERE IS WHEN THEY SEE US?
Oh right, they don't.

.@goldenglobes are y'all ok?? The HFPA just wholly snubbed 'When They See Us' — not even giving its Emmy-winning actor a nomination. I am confusion.

When They See Us getting ZERO Golden Globe nominations tells you everything you need to know about the #GoldenGlobes.

## No Love for LupitaLupita Nyong'o won raves for her performance in "Us," in which she played two extremely different characters. While her work as Adelaide captured the character's fear perfectly, her performance as Red was menacing, terrifying and absolutely worthy of a nomination. The snub comes after Lupita won the New York Film Critics Circle Award for Best Actress over the weekend for the same film.

The absence of Lupita Nyong'o for Us is just astounding.

Playing both "Red" and "Adelaide" as so distinctive yet connected to the point that we weren't sure which was which is a performance I'll never forget.

It's depressing that the #GoldenGlobes did. pic.twitter.com/oADiZQPSIe

lupita nyong'o delivered what is arguably the best performance of the year and you cannot tell me otherwise.. seeing her get snubbed is an absolute shame pic.twitter.com/KJ6t3vaJ6r

lupita nyong'o didn't study spasmodic dysphonia, work with an ENT doctor, a vocal therapist, a dialect coach AND stay in character for the entirety of her time on set as a tethered just for the academy to nominate girls like scarlett johansson over her. i am absolutely disgusted pic.twitter.com/1aL46LkDn6

the range both zendaya & lupita have,,,, scarjo only wishes pic.twitter.com/AxgxtOwvsW

i wish horror wasn't ignored when it comes to award season. both florence pugh in midsommar and lupita nyong'o in us deserved recognition pic.twitter.com/fs1rCVZAuy

## Some to CelebrateNo, not every popular tweet about the Golden Globe nominations was a negative one. Here are some of the announcements that got fans celebrating their favorite stars, shows or films.

For the North!
Congratulations to Kit Harington on his “Best Actor - Drama” nomination at this year's #GoldenGlobes pic.twitter.com/9Ut4FqeMM9

It happened, friend. @ItsRamiMalek was nominated for Best Performance by an Actor In A Television Series – Drama at the #GoldenGlobes. #MrRobot pic.twitter.com/ozAyodzDdH

Congratulations to @JLo on her #CriticsChoice Awards nomination for Best Supporting Actress! pic.twitter.com/jLthNKd7FK

Meryl Streep has now extended her #GoldenGlobes nomination record to 32